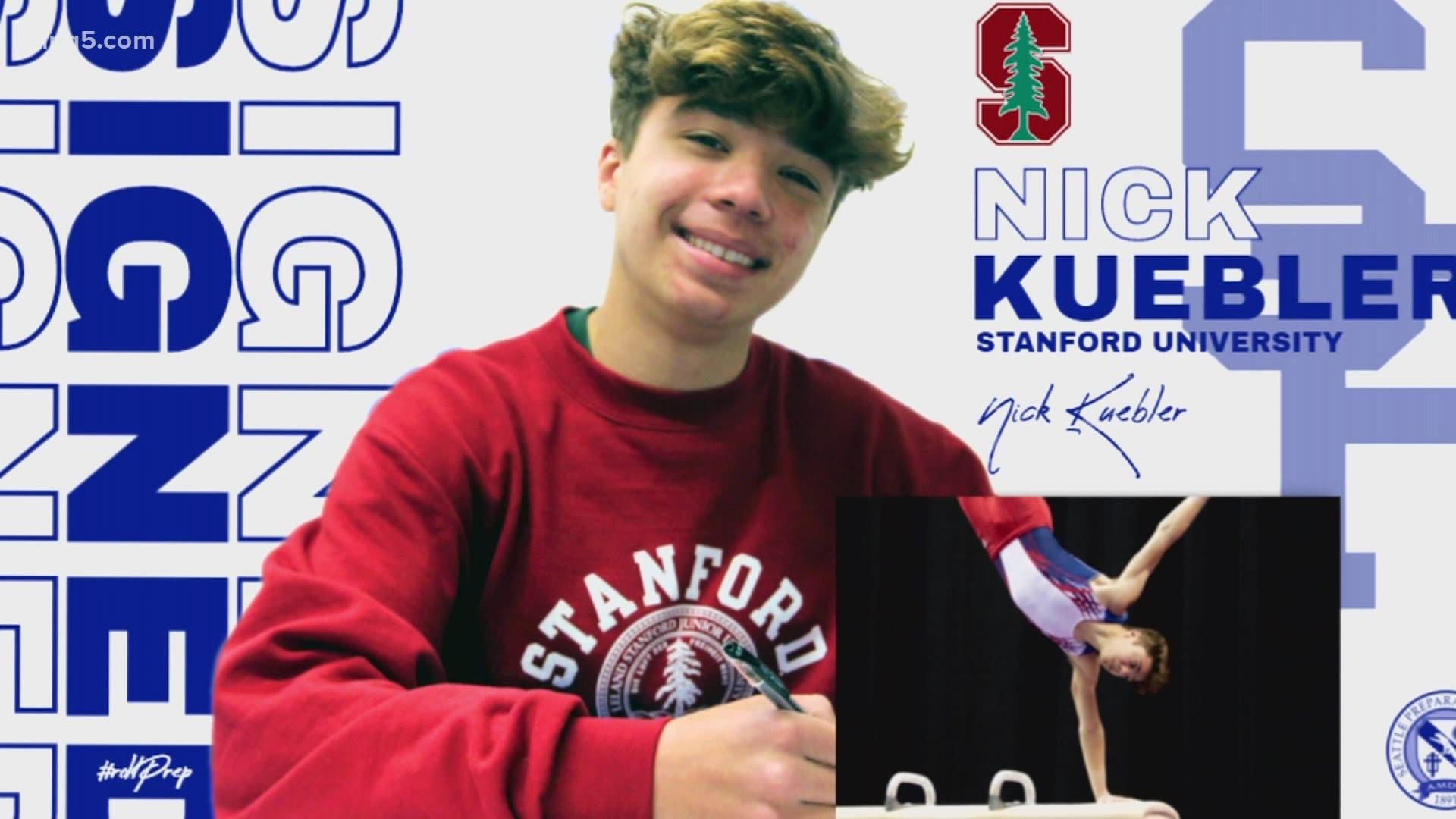 KENT, Wash. — Being a good gymnast takes strength, coordination, flexibility and discipline. Seattle Prep senior Nick Kuebler combines all of those qualities and more, according to Max Soifer, a coach from Metropolitan Gymnastics in Kent.

“It's just dedication, hard work and the ability to cope with delayed gratification," Soifer said. "You're not going to succeed early. It's going to take a long, long time. But you can get there, and it's doable and Nick has proven that."

Nick has been competing in gymnastics since he was 9. Now at the age of 18, Nick has vaulted himself to the top. Last year, he took first place in floor routine and 2nd in the all-around at the US Championships.

He’s been consistently placing in the top 5 at national championships and Junior Olympic events since he was 12.

“He's definitely the most talented gymnast I think that I've seen. Just pure natural ability and really dedicated," said Eli Richardson, a coach from Metropolitan Gymnastics. Nick trains with his coaches there 5-6 days a week, 4 hours a day.

It doesn’t give him much free time, but Nick doesn’t seem to mind.

“I guess someone could call that sacrifice," he said. "But to me, I view it just as a part of the sport."

Nick’s mom was a member of the Russian national gymnastics team and his dad was a swimmer. But they never pressured Nick into gymnastics. It’s just something he fell in love with.

Nick says flying thru the air is tough to top, “Oh my gosh it's amazing, especially on the high bar. When you're doing a back flip in the middle of the air and catching the bar again, it gets your heart pumping -- and scary for sure  -- but it's so rewarding."

Having balance in gymnastics is key, but Nick also has balance in his life. He takes his academics seriously and has a 3.95 GPA. Next year, he will head to Stanford University and compete on a Cardinal gymnastics team that won the national championship in 2019.

While many kids dream big, Nick sets goals instead.

“I would say 'goal big' instead. So everything that I truly want to achieve, I'll set it as a goal, rather than a dream,” Nick said.

And while he has plenty of goals for Stanford, Nick also wants to be an Olympic champion.

“I'd like to win Olympics in the all-around, the pommel horse or, honestly, any event would be great. But yeah, that's definitely my goal in the future."

Coach Soifer added, “Nobody can predict the future, but all the good things that are coming to him, he deserves."