Logan Oyama and the Puyallup High School boys soccer team was looking forward to defending their state title until the coronavirus outbreak. 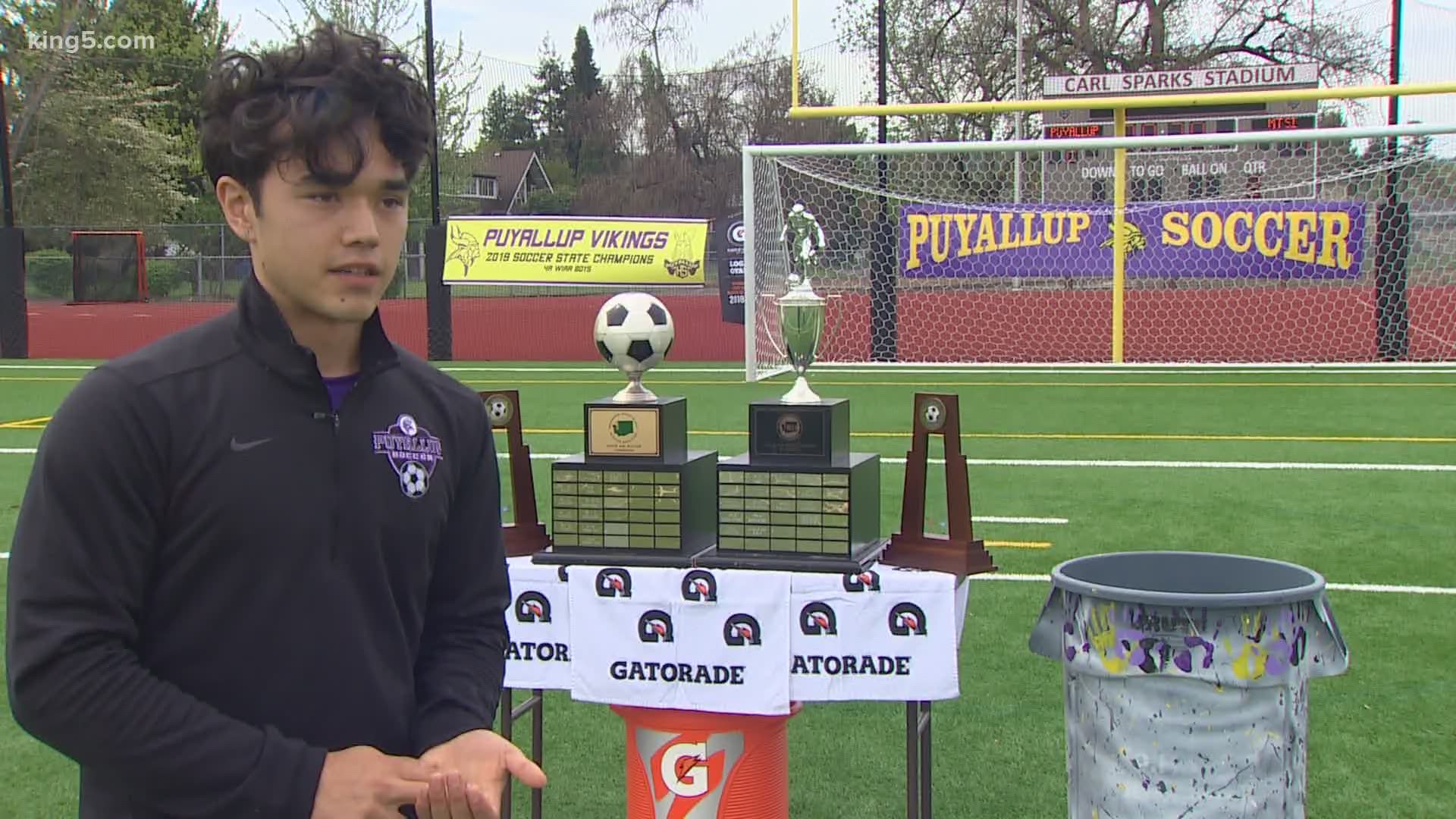 PUYALLUP, Wash. — Last year was a great one for the Puyallup High School soccer program.

Soccer coach Matt White became the first since Joey Waters at Bellarmine Prep to win a boys and girls state championship in the same year.

This spring, the boy’s team was looking forward to defending its title with senior captain Logan Oyama leading the way.

Oyama is one of the best. As Coach White describes him, "a mountain, an unstoppable force that you know is not going to get worn down, except - you know - by serious amounts of erosion, I guess. But, you know, everything he brings to practice and he brings to games is just that thing that the team can be built around and on."

In 2019, Oyama was named the Gatorade Soccer Player of the Year.

“If you look at the trophy, it has academic excellence, athletic excellence, as well as exemplary character, and what you do in the community. And so that's what was really special for me, was that it wasn't just soccer, it was all the aspects of my life kind of coming together and being awarded for that,” Oyama said.

During his junior year, Oyama scored 20 goals and dished out 13 assists.

It was his last goal as a Viking that he’ll cherish the most. With two minutes left in the state title game against Mount Si and the score tied 1-1, it was Oyama who would have a chance to win it. On this night, Oyama didn’t miss. He fired a rocket to give Puyallup their first ever boys state soccer title.

“You couldn't have scripted it any better. To be able to score in that moment and then run to my fans and all my friends in the crowd was a really special moment and just to see all them smiling and cheering along with us,” Oyama said.

Because of the coronavirus pandemic, that would be Oyama’s final high school soccer moment.

This fall, Oyama showcased his athletic skills by playing No. 1 tennis doubles for the Vikings.

“He was able to advance so quickly with very little instruction. Just took to the game naturally and he became a pretty darn good player after four years,” Puyallup tennis Coach Brooks Hazen said.

"You always hear about specializing in different sports but we tried to encourage him to play everything, and he did,” Oyama’s dad, Dan Oyama, said.

If you think Logan Oyama is determined as an athlete, you should see him in the classroom. Over the past four years, he’s received an "A" in every single class except one. He received an "A-" as a freshman in Algebra. But he hasn’t let that slow him down. Next year he will take his academic and soccer talents to Princeton.

“He put in the effort and he worked hard...Very proud, absolutely,” Oyama’s mother, Karen Oyama, said.

“I think one of the biggest things that I've learned from my parents and one of the big things I've tried to do with my life is to be someone who is caring for all other people and be willing to accept them for who they are,” Logan Oyama said.