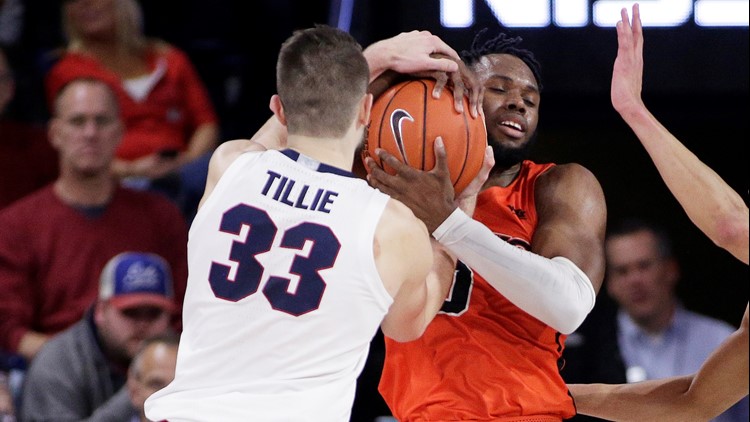 Jahlil Tripp scored 21 points and Pierre Crockrell II added 10 for Pacific (15-8, 3-4), which is making strides under fourth-year coach Damon Stoudamire. The Tigers have lost 15 in a row to Gonzaga.

Petrusev, who leads Gonzaga in scoring and rebounding, was back in action after being helped off the floor when he suffered an ankle sprain early in the second half last Saturday against BYU.

Gonzaga made 10 of its first 12 shots to jump to a 24-9 lead in the first eight minutes. Tillie and Petrusev accounted for 17 of those points.

Tillie replied with consecutive 3-pointers to push the lead back to 14. He made four of his five attempts from 3-point range in the game.

Gonzaga led 48-33 at halftime, behind 17 points by Tillie, who made all three of his 3-point attempts, and 12 from Petrusev.

The Zags shot in the 70s for much of the first half before finishing at 64.5%. Pacific shot 50% and Tripp finished with 15 first half points.

Gonzaga opened the second half with an 18-4 run, nine by Kispert, to build a 66-37 lead. Pacific made just one of 11 field goals during that run and was shut down for much of the second half.

Pacific shot dramatically worse in the second half, making just 23.5% of its shots.

Gonzaga dropped from No. 1 on Monday despite winning two conference games by a total of 73 points last week. But the Zags should hold at No. 2.

Pacific: The Tigers have lost three straight games. ... Pacific leads the WCC in defense at 64.2 points per game, but couldn't slow Gonzaga, ... Tripp averages 15.5 points per game, the only Pacific player in double figures. Tripp also leads the team with 8.4 rebounds per game.