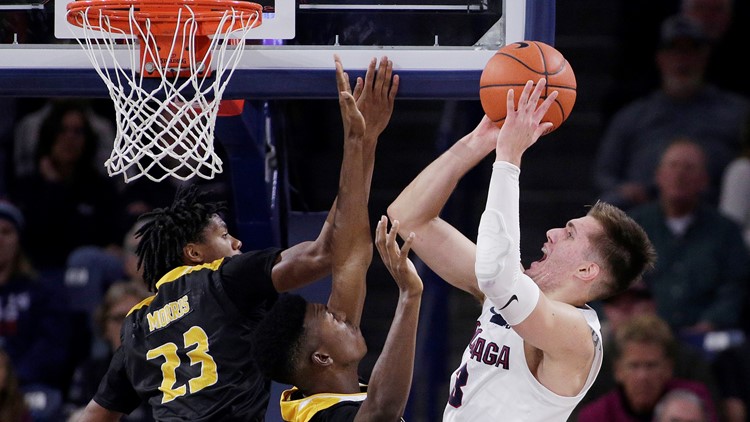 SPOKANE, Wash. (AP) — Gonzaga forward Filip Petrusev knows that the team's first two games were against lesser opponents, and that the road will get tougher pretty quickly.

Petrusev scored a career-high 25 points on 9-for-10 shooting as No. 8 Gonzaga beat Arkansas-Pine Bluff 110-60 on Saturday night.

Petrusev eclipsed the career-high 15 points he scored in a rout of Alabama State on Tuesday.

"These games are not as competitive," the sophomore said. "There will be more intense games coming on."

Gonzaga plays at Texas A&M next week, plays at the Battle 4 Atlantis later this month, and hosts North Carolina next month.

"We just have to get better," Petrusev said.

Watson, a freshman, said having so many scorers is nice.

Petrusev added six rebounds and two blocked shots, and the Golden Lions had no answer for the 6-foot-11 sophomore.

Arkansas-Pine Bluff coach George Ivory did not address reporters after the game.

Robert Boyd's 3-pointer lifted Arkansas-Pine Bluff to its only lead at 10-9.

With the score tied at 14, Gonzaga hit three straight 3-pointers — two by Woolridge — to ignite a 17-2 run for a 31-16 lead. The Golden Lions were scoreless for more than four minutes.

Gilder's long 3-pointer capped an 11-4 Gonzaga run that lifted the Bulldogs to a 46-22 lead with just over five minutes left in the first half.

Doss sank a 3-pointer and a field goal as the Golden Lions cut Gonzaga's lead to 46-29.

The Golden Lions shot just 43.5% from the field and committed 12 turnovers in the first half.

This is the second meeting between the teams, with Gonzaga winning 92-42 in 2001. Dan Dickau led all scorers with 18 points in that game, and was courtside on Saturday as a television analyst. Gonzaga assistant coach Brian Michaelson also played in that game.

Gonzaga has just nine scholarship players because of Killian Tillie's knee surgery and Brock Ravet's decision to leave the team. The reserve players got some quality minutes in this game. "We're down on depth and those guys need game experience and they need it quick," Few said. "Hopefully we can get to the point where we can use them and trust them."

Arkansas-Pine Bluff: The Golden Lions play 11 of their first 12 games on the road. They are predicted to finish seventh in the Southwestern Athletic Conference.

Gonzaga: The Bulldogs have won 24 consecutive home games. They are 15-0 all-time against teams from the SWAC. The Zags and Wofford were the only teams without a conference loss last season. Gonzaga's average of 33 wins per season since 2014-15 leads the nation.