"These shootings are happening from these kids that you're cornering out, that you're bullying...because you think it's funny. And it's not funny." 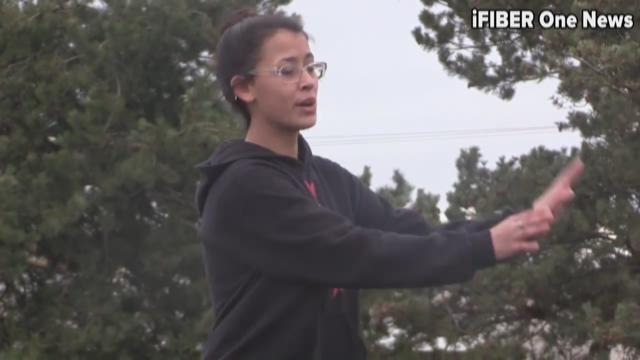 MOSES LAKE, Wash. – A student’s plea for kindness at her school’s walkout Wednesday is going viral after a local news outlet posted the video online.

Angelica Mansfield was the only student to speak at the Moses Lake High School walkout to protest gun violence.

In this video posted on Facebook by iFIBER One News, it shows Mansfield's powerful speech.

“These shootings are happening from these kids that you’re cornering out, that you’re bullying...because you think it’s funny. And it’s not funny,” she said. “All of these kids just want to be themselves, they want to be who they wanna be in their own schools.”

RELATED: Why one student sat alone after thousands marched

Mansfield implored her fellow students to be good to each other.

KREM 2 spoke to Mansfield about what inspired her to get up and speak before her classmates.

"The crowd was really talkative and messing around and stuff so it made me more nervous cause I didn't feel like they would listen to me," Mansfield explained.

She echoed the cause of the “Walk Up, Not Out” campaign, which has been making waves online the last few days. The idea is to make school a friendlier place for kids who are bullied.That campaign has been embraced by critics of the Parkland students’ focus on gun control.

“I don’t see why it’s so hard to be nice. And care. And love each other. Like, it’s not hard,” Mansfield said in the video. “And I know some of you are going to laugh and look at me like I’m stupid, but I don’t care because somebody said something while we’re out here. Somebody stood up.”

Most studies put the rate of bullying in U.S. schools between 20 and 40 percent of all students. Beyond that, the CDC says those who are targeted in bullying are at a greater risk for mental health and behavioral problems.

"Right after my speech there was a girl that came up to me and she started crying and she hugged me, talking about how all the stuff I said was stuff she couldn't say," Mansfield said.

Mansfield said its things as simple as a hug, or a smile that can change someones day at school. She said although her message may have come off as aggressive, in the moment, it was the only way that people would listen. But Mansfield said it is not only their fight, lawmakers and adults need to join in too.

"I think they should be out here fighting just as much as kids are. We shouldn't have to fight this hard. Like they say, we're kids," she said.