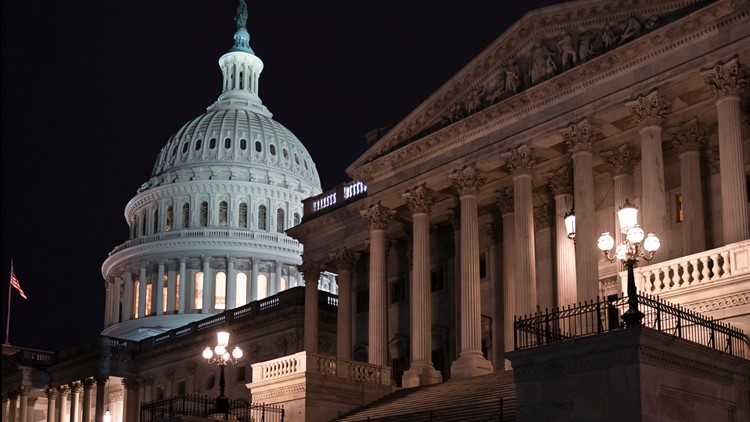 Photo by: AP
The Senate is seen as the impeachment trial of President Donald Trump is set to resume at the Capitol in Washington, Friday, Jan. 31, 2020. (AP Photo/J. Scott Applewhite)

VERIFY: Why senators running against the president can vote in the impeachment trial

As the impeachment trial continues to move on and the Senate gets closer to a vote on whether or not to remove President Trump, a viewer asked about potential conflicts of interest.

Four Senators are currently running for the Democratic nomination to run for President in 2020.

Do their ongoing campaigns have any effects on their ability to participate in the Impeachment trial?

Why can senators running against the president vote in a trial to remove him?

Simply put, there is no rule--constitutional or otherwise--preventing them from doing so. In fact, impeachment trials are no strangers to what appear to be conflicts of interest.

Once again, the first place we turn to is the United States Constitution. It says that “The Senate shall have the sole Power to try all Impeachments” but doesn’t specify anything more. It doesn’t dictate any rules about the impeachment trial or whether certain senators can or cannot participate. The Constitution left that to the discretion of the Senate.

Several of the senators voting in this trial had conflicts of interest. A couple from his own party were running for president against him and one from the opposing party could ascend to the presidency from his removal.

President Andrew Johnson, a Democrat, became president after Abraham Lincoln, a Republican, was assassinated. Congress was dominated by the Republican Party immediately following the Civil War and Johnson wound up constantly at odds with them. That paved the way for his impeachment.

Since there was no vice president following Johnson’s jump from the position to president, the next in line for the presidency was a member of Congress. At the time, this was the senator elected president pro tempore--a Republican named Benjamin Wade.

Given that Wade could rise to the presidency if Johnson was removed, Wade’s participation in the impeachment trial was controversial at the time. Nonetheless, he voted. Wade voted to remove Johnson from office.

So while it may seem surprising that senators can vote in a trial against their potential opponent in the presidential race, it’s not unheard of and there are no rules against it.