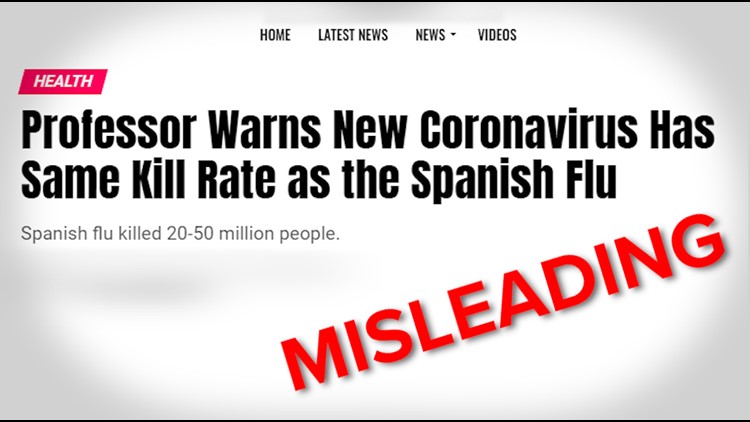 A new strain of coronavirus is being compared to the deadly 1918 Spanish flu outbreak, but some of the comparisons are missing key context.

While a number of articles and social media posts have started popping up, most link to the same source, a Yahoo News UK article.

Without context, that’s a pretty frightening quote and certainly headline-worthy.

When VERIFY reached out to Professor Ferguson directly, he explained that his quote is not the doomsday prophecy it’s being portrayed as.

Did a professor warn the new coronavirus has the same kill rate as the Spanish flu?

Ferguson did compare the viruses, but there are two important distinctions:
1.) He was only talking about the death rates of the Spanish flu in the U.S. and UK, not the global death rate.

2.) He was trying to put into perspective whether a one to two percent mortality rate is serious, and used the Spanish flu as a comparison.

VERIFY reached out to Ferguson about the article and subsequent headlines based off his statements.

He explained that he made the comment in a briefing to journalists regarding the virus. He said he was asked how severe a 1-2% death rate actually is. As a comparison, he pointed out that in the U.S. and UK, the Spanish flu’s mortality rate was about two percent.

Ferguson used the United Kingdom’s data to estimate the death rate for the Spanish flu. He said the estimated pandemic mortality rate for Britain was estimated to be 230,000 while the flu affected 25-33% of the UK’s 38 million people.

While Ferguson says two percent is the mortality rate estimated for the UK and the US by scientific papers, he says higher estimates have been generated for the Spanish flu death rates in other countries.

Using the available data, the Centers for Disease Control and Prevention estimates that at least 500 million people worldwide were infected by the virus and roughly 50 million people died from it.

Put simply, about one third of the global population at the time was infected. The World Health Organization’s estimates are the same.

If we were to use those numbers, the Spanish flu’s global death rate would be about 10%.

That’s part of the reason these headlines are so misleading. The Spanish flu is often referred to as the most deadly pandemic in recent history. When people hear a new virus being compared to it, they likely aren’t thinking of the one to two percent who died in the UK -- they’re thinking about the 50 million people killed worldwide.

It’s also not surprising that the global death rate would be higher than the UK’s death rate. It’s likely the UK had better medicine and treatment at the time than much of the world.

Which brings us to the problem with headlines like these. There’s a few things they don’t consider.

First of all, medicine is much more advanced now than it was back then. For example, the CDC says there was no vaccine to protect against influenza infections. While there is no vaccine available for this coronavirus yet, there are news reports stating that a vaccine is in development.

The other issue is the vastly different circumstances. These headlines ignore not only the advances in medical technology, but also the scale of the outbreak.

The current death rate from the coronavirus is based on several hundred people. The Spanish flu death rate was calculated from a sample size of hundreds of millions.

Additionally, every death from this strain of coronavirus has occurred within Wuhan, the city it originated from. Keep in mind, the UK’s Spanish flu death rate differed from the death rate of other parts of the world.

Ferguson made the comparison to illustrate how serious it would be if the coronavirus continues to have the same death rate it has so far. This does not guarantee that the death rate for the coronavirus will continue to remain the same nor does it guarantee it will be as devastating as the Spanish flu, the worst pandemic in modern history.