A piece of property in South Puget Sound where a Horizon Air employee crashed a stolen plane is still littered with debris nearly two months after the explosion. 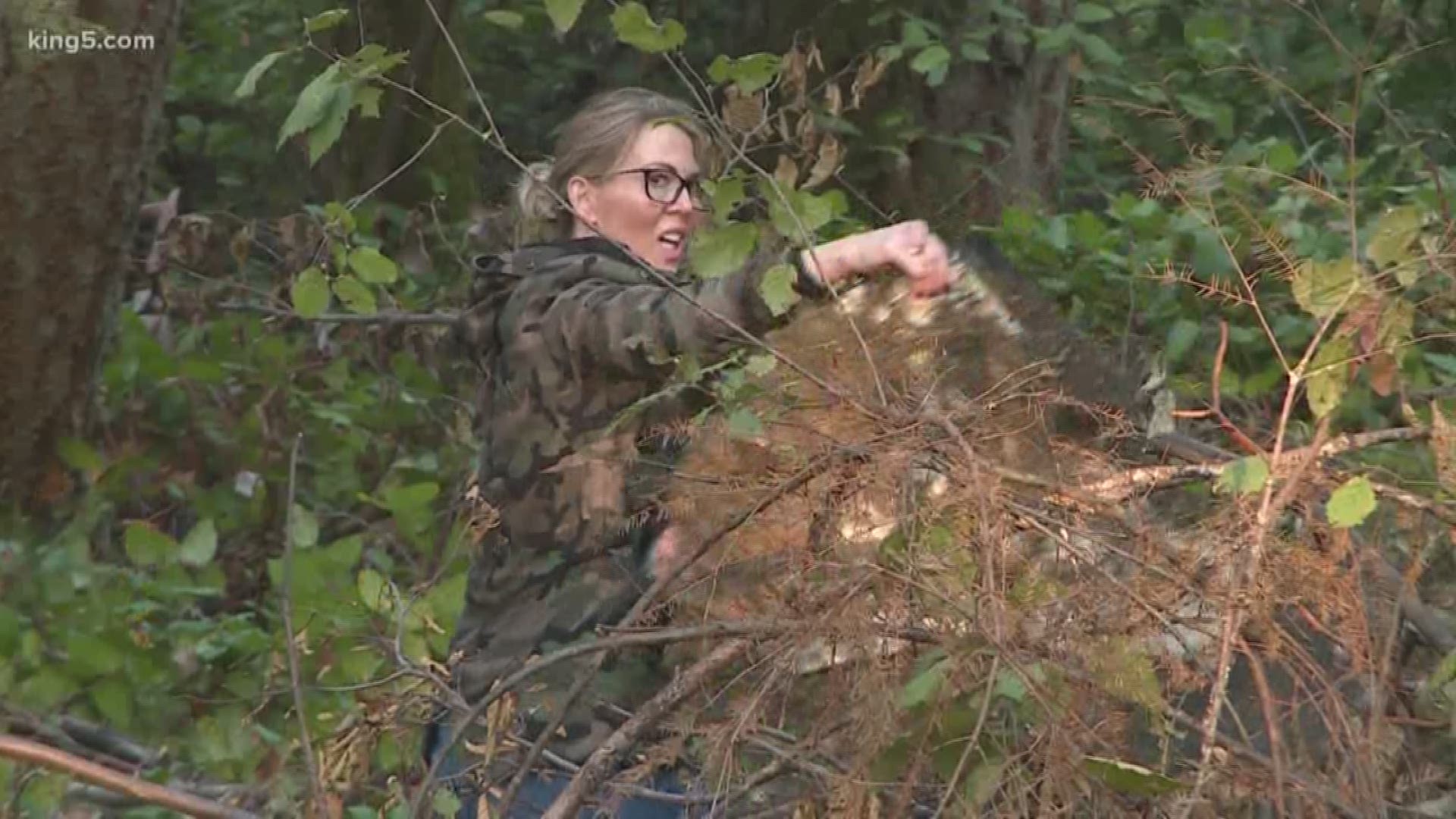 KETRON ISLAND, Wash. — The owner of the property where a stolen Horizon Air plane crashed in August says she is frustrated with how long the airline is taking to clean up bits of aircraft debris, wires, broken glass, insulation, and chunks of aircraft, some as large as three feet in diameter, which still litter the site.

“It was like the magical hidden forest,” said Tiffany Lundgren, whose father purchased the land in the 1970’s as an investment. “Now it’s just sad.”

During a visit to the property Friday, Lundgren found a three-foot white panel with a lever and the words “fill to specification oil” printed on it.

“Every time I come out I find something else,” she said, while collecting a long stream of bright pink emergency tape, which was part of the aircraft.

Lundgren, who lives in Redmond, was dropping her daughter off at college at Washington State University on Aug. 10 when she got a call from a friend telling her to turn on the TV.

Richard Russell, a Horizon Air employee, had stolen a Q400 aircraft from Sea-Tac Airport, flown stunts over Puget Sound, and crashed it into Ketron Island.

“I knew it was our land immediately, because we own the largest parcel on the south side, so I knew it had to have been ours,” Lundgren said.

RELATED: 'I was blown away': Stepbrother of man who stole plane speaks out

Salvage crews hired by Alaska Airlines, which owns Horizon, removed most of the aircraft debris in the days following the crash.

Lundgren expected them to return to clean up the smaller pieces, but it’s been almost two months since fire engulfed her childhood playground, and on Friday she said she had no idea what the airline planned to do next.

“They've had my number, they’ve had my email. I haven't heard from them, I had to reach out to them,” she said. 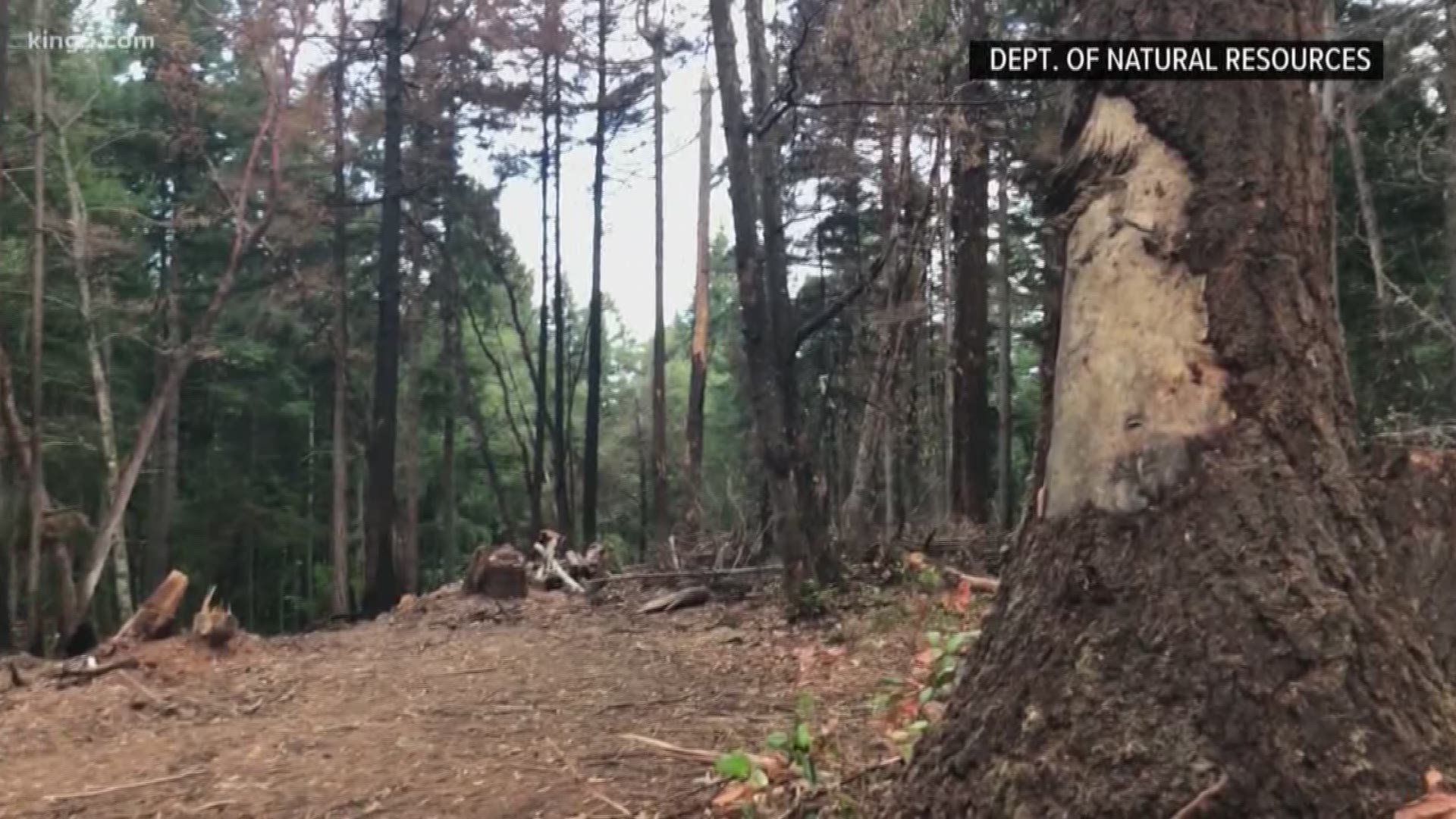 It wasn’t until KING 5 started asking questions that Lundgren started getting answers from Alaska.

In a statement, the airline admitted there have been some “communications challenges” with the property owners, who include Lundgren and her father, who lives in Panama. A neighbor on the island was also designated as a point of contact for first responders and investigators following the crash.

“Our work there is not finished. Getting the land back to an appropriate condition will take some time, including the planting of new trees. We remain committed to doing the right thing on the island. Our goal is to leave the land in the best condition possible that’s satisfactory to all property owners,” an Alaska spokesperson said.

“It’s very encouraging. Now I just hope they follow through with it,” Lundgren said after reading the statement for the first time Friday.

Lundgren said she visited her Ketron Island land only a handful of times in the years before the crash. She does not have a house there and hoped to bring an Airstream trailer to the site to make it a summer camping destination.

“I don’t know now with all of this,” she said, gazing at the charred trees and piled up broken branches.

LISTEN: Audio from the cockpit of stolen plane

Nearby, someone left a memorial to Russell, the Horizon employee who died. A metal cross with a laminated photo of him hangs on one of the trees. Lundgren says she doesn’t know who put it there.

“It just makes me sad for everybody involved,” she said.