Despite delays and cost overruns, transportation and infrastructure experts say Seattle has avoided the problems that plagued Boston. 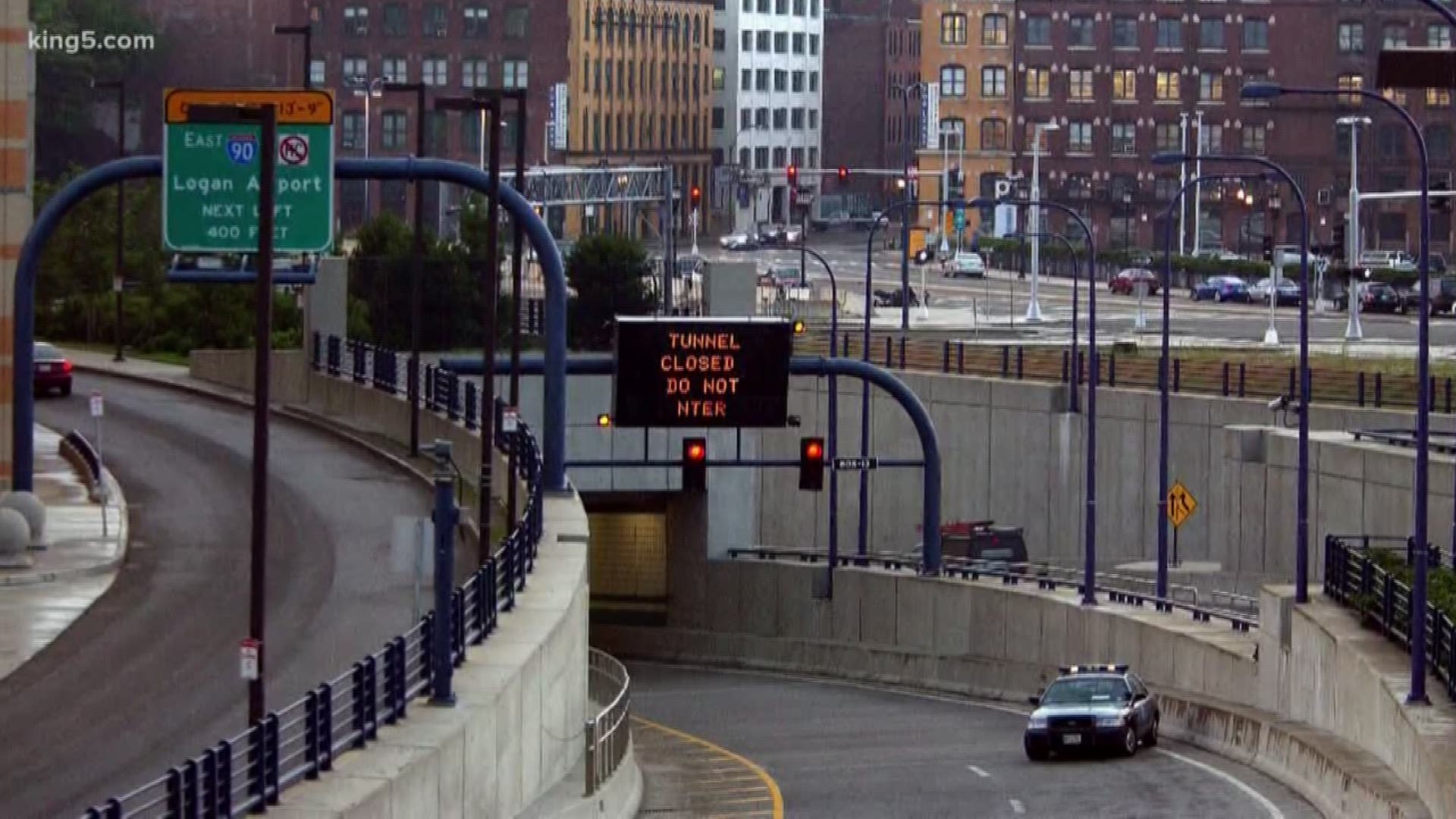 Seattle and Boston have a lot in common: they are both cities on the water, homes to higher learning institutions and hubs for tech companies.  They are connected by Interstate 90 and memories of a Superbowl both cities can’t forget.  Now Seattle and Boston are both home to big tunnels that run under the downtown core.

Seattle’s tunnel will now face a new challenge: avoiding the problems that plagued Boston’s Big Dig long after it opened.

The Big Dig began as a project to replace the Central Artery, an elevated 6-lane highway that was structurally unsound and horribly congested.  The state of Massachusetts decided to build an 8-to-10 lane underground expressway, a system of tunnels and four major highway interchanges.  However, costs and the construction schedule ballooned out of control.

When Seattle was planning the Highway 99 tunnel, Boston’s troubled Big Dig represented everything that could go wrong.  Opponents rallied against the Seattle tunnel, holding signs reading, “No Big Dig.”

In 2009, then-Washington Governor Christine Gregoire vowed to investigate what went wrong in Boston and make sure that any and every lesson that can be learned would be learned.

Infrastructure experts point out that construction was different on the two tunnels.

"Seattle had the benefit of not having an 8-lane super highway that it had to bury,” says Dan McNichol, a former Big Dig spokesperson who has written books about Boston’s tunnels.  He says, in terms of scale, the Big Dig was the equivalent of burying I-5.

"The Big Dig was much shallower; therefore, the whole city was ripped up. They call that kind of construction cut and cover,” he explains.  Seattle used Bertha, the tunnel boring machine, to create the Highway 99 tunnel.

Both tunnels were delayed and over-budget, but the numbers are significantly different.

The Big Dig was projected to cost $2.6 billion.  The final price tag was nearly $15 billion, and it was 8 years behind schedule.

Seattle’s viaduct replacement project was expected to cost $3.1 billion. Right now, the Washington State Department of Transportation has budgeted $3.3 billion.  It is 3 years behind schedule.

Former Washington Transportation Secretary Doug McDonald also worked as a transportation official in Boston.  He says, “The main lesson in Boston is to try to get through the job successfully.  This tunnel has done it.  It’s a B+ if not better. “

Reaching opening day is a milestone for Seattle’s tunnel project, but the work is only beginning for WSDOT crews tasked with maintaining it.  There’s no better lesson for what could go wrong than Boston’s Big Dig.

On July 10, 2006, a concrete panel fell from a Big Dig tunnel ceiling, crushing a car and killing Milena DelValle, who was a passenger. The incident was blamed on the failure of several anchors embedded in epoxy that held the panels up.

McNichol says, “That’s just tragic. There’s just no excuse for that, and that launched one of the largest National Transportation Safety Board investigations.”

That was only the beginning of the Big Dig’s problems.

In 2011, a 110 lb. tunnel light came crashing down onto the highway.  Inspectors later found hundreds of cracked or deteriorated nuts holding those light fixtures up.

Leaks in the tunnels have also cost taxpayers millions.

“Civil engineering is very straightforward,” says McNichol.  “But the short-cuts that were probably executed caused massive light fixtures to fall in the Big Dig.  Some of the tunnel finishes were cut short and stripped to save money, and that was a disaster.”

He adds, “I know Seattle has taken a chapter and reversed from the Big Dig on those issues.”

Former Transportation Secretary Doug McDonald has been inside the Seattle tunnel and has high praise for its construction.

“This tunnel is built with these solid rings that are very substantial, so things aren’t going to be falling off the ceiling,” he says.

He adds, “No project anywhere is absolutely safe, but what we want to know is that this tunnel is as safe as it should be for you and me to drive through it and a little more. I have no doubt that this tunnel has been engineered and constructed so we should have the confidence that we’re going to go in one end and come out the other and we’re going to be safe.”