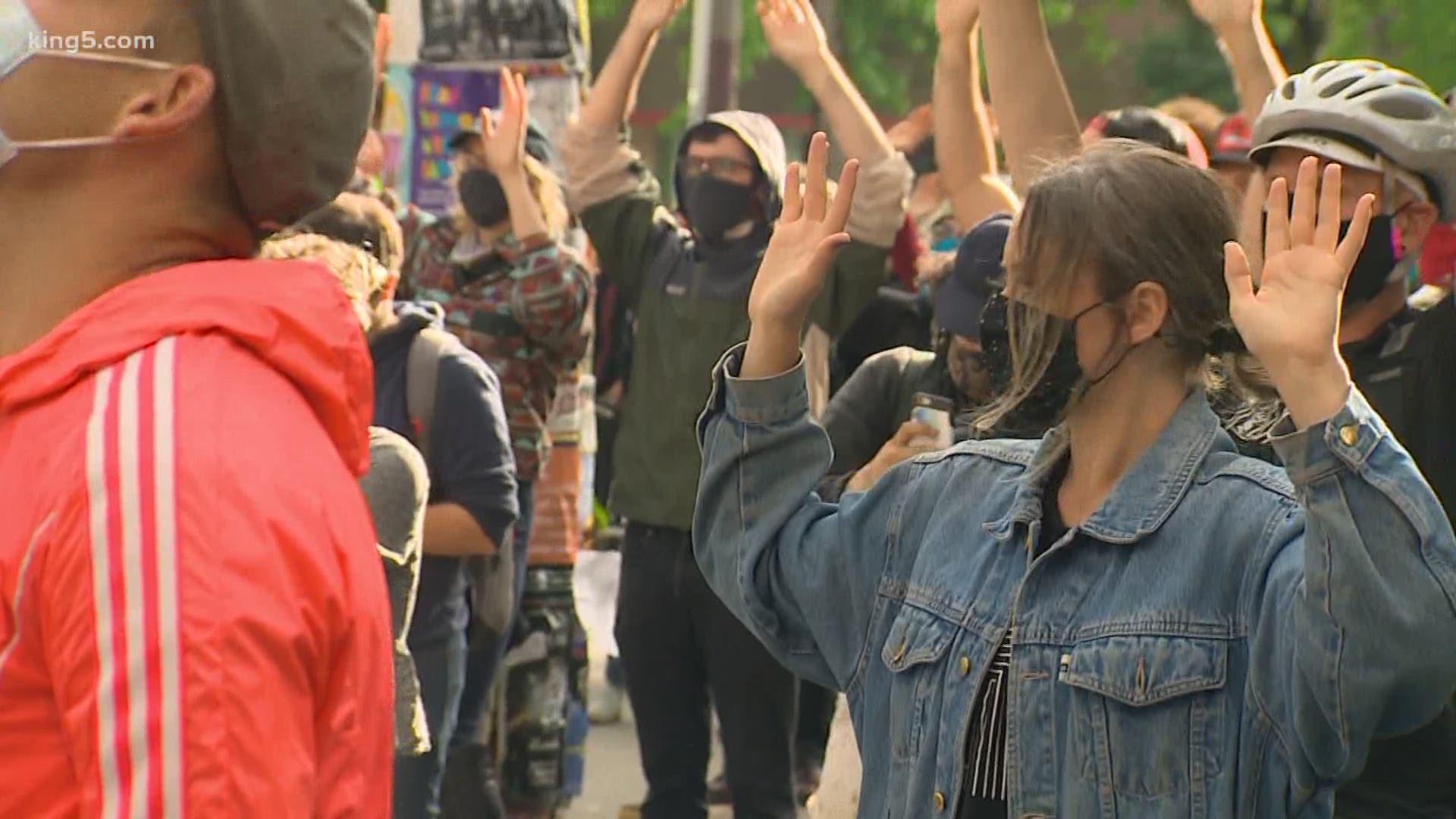 SEATTLE — Protests continued for the fifth night across Puget Sound. While the majority of the demonstrations remained peaceful, the scene on Seattle's Capitol Hill showed signs of re-escalating late Tuesday.

Once again, demonstrations were peaceful for most of the day as people gathered across western Washington and marched asking for change.

Around 6 p.m., Seattle Police Chief Carmen Best announced there would be a mandatory curfew from 9 p.m. to 5 a.m. through Saturday.

Demonstrations stayed peaceful on Capitol Hill even hours after the curfew started. But around 11:40 p.m., that changed as police used tear gas on protestors.

Herbert Henderson was at the protest the moment it happened. He said someone in the crowd started the incident after a bottle was thrown towards officers.

Henderson said most of the people who were protesting all day long were peaceful, and that there was a small group of people who were there wanting to cause problems that arrived later in the night.

“With everything we are trying to accomplish, that was the most progress I’ve seen to actually get somewhere on both sides, with the protesters and with the officers and the city,” Henderson said early Wednesday morning about the peaceful demonstrations before items were thrown at police. “It’s those people that aren’t looking to actually, you know, tear down what’s been going on and make something better, they are just looking to create chaos. They insert themselves into the protests, do that, now everything over the last few hours that everyone had been doing that was so amazing and building was just torn down.” 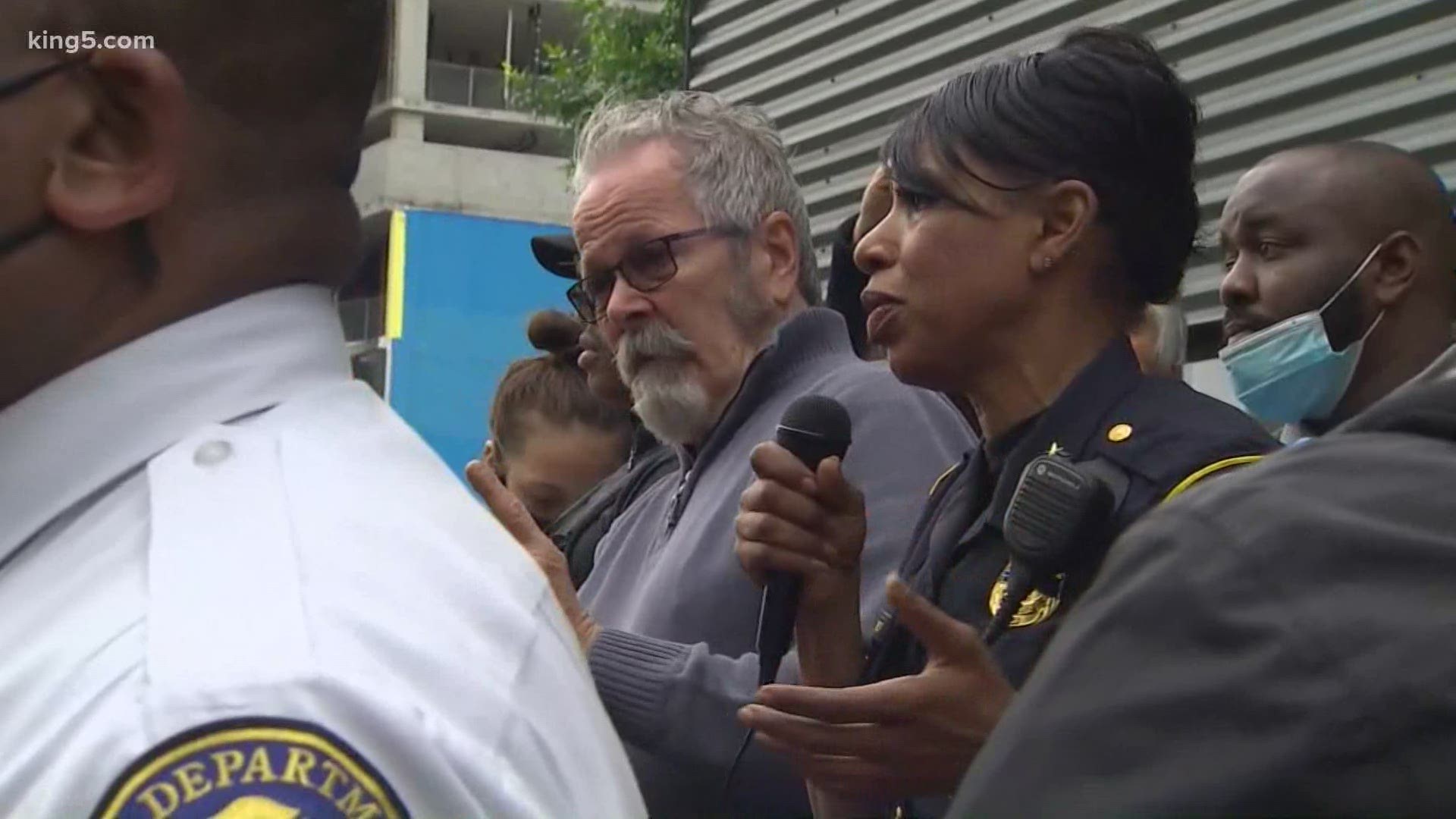 Protests on Capitol Hill escalated again late Tuesday night as the curfew continued into Wednesday morning. KING 5 crews report some tear gas was deployed, but it's unclear who sprayed the canisters and who it was directed at.

Both directions of I-5 closed again through downtown Seattle as protests continued Tuesday evening.

Seattle officials sent an emergency alert to cell phones to warn about the citywide curfew in effect from 9 p.m. to 5 a.m.

A large crowd is currently gathered for a peaceful demonstration at Cal Anderson Park in Seattle's Capitol Hill neighborhood. 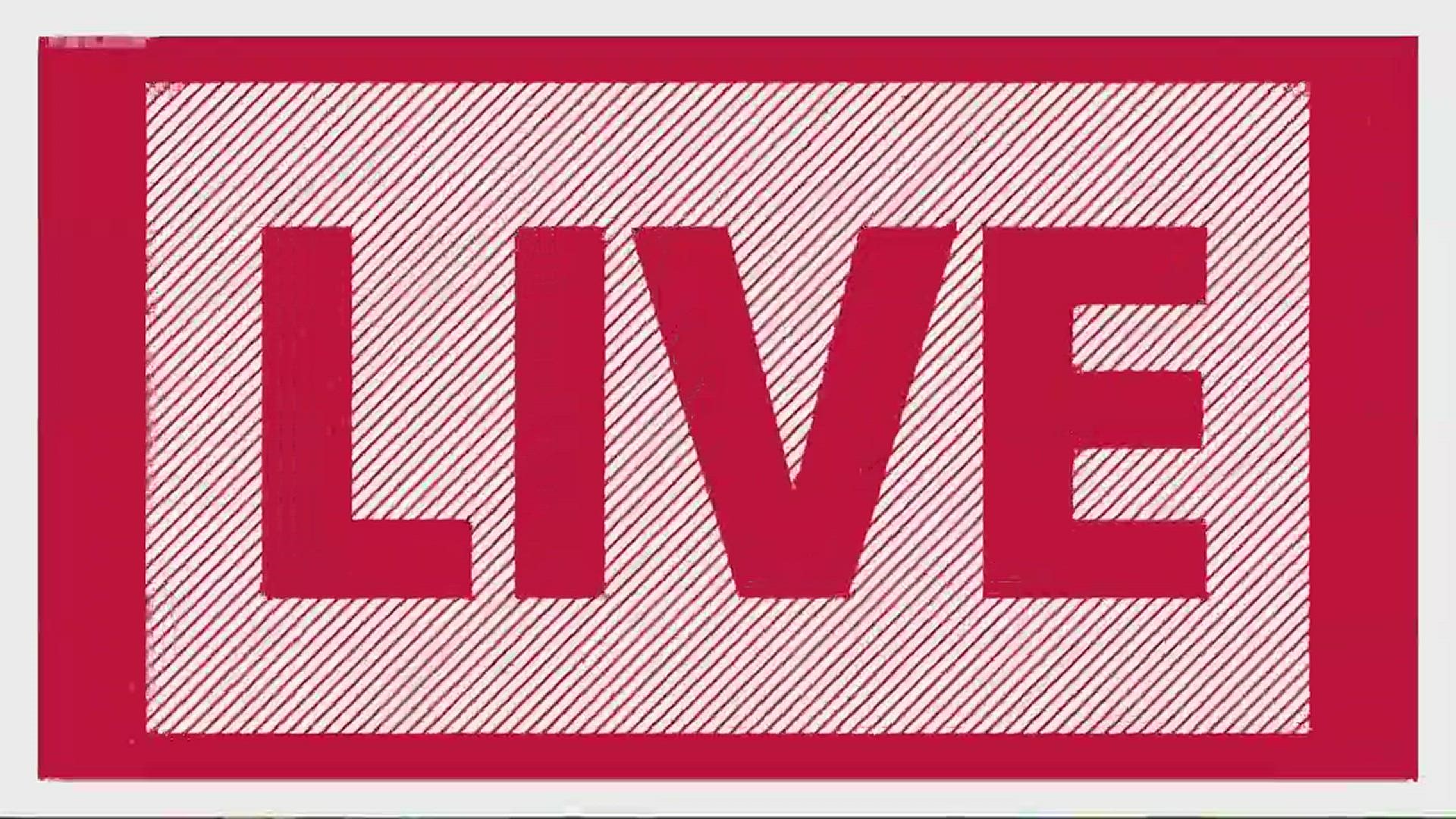 These Puget Sound cities remain under the following curfew orders:

Organizers of the peaceful demonstration planned for Seattle shared an email for people who want to get involved: seattlesunited@gmail.com

SkyKING is live over downtown Seattle where large crowds are gathered for the 5th night of protests over the death of George Floyd.

Seattle Police Chief Carmen Best just announced the city's mandatory curfew will remain in effect from 9 p.m. to 5 a.m. through the morning of Saturday, June 6. Best also urged demonstrators to remain peaceful after violent protests over the weekend, "I know we are better than that."

City leaders clarified they did not plan to arrest peaceful protesters who defied curfew orders.

Shortly after Durkan and city leaders addressed a large crowd of demonstrators, the mayor delivered a prepared speech about the city's response to ongoing protests in downtown Seattle and beyond. 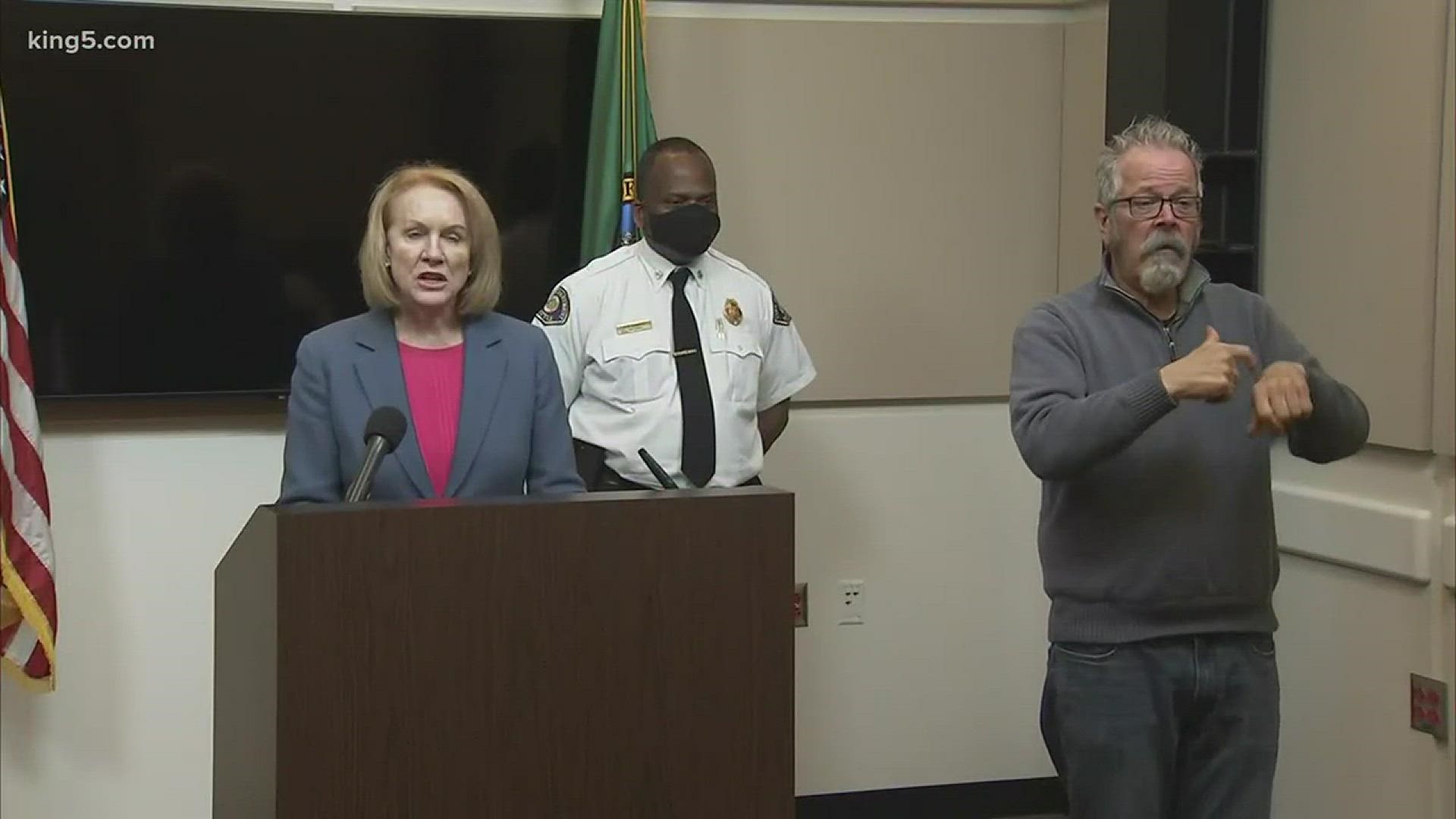 Organizers of Tuesday night's demonstration indicated the group was heading for Cal Anderson Park on Capitol Hill for the 5th night of protests in Seattle.

Durkan, Best, and Scoggins address large crowd gathered for 5th night of protests. Organizers of the demonstration also took turns addressing the crowd. They had been scheduled to give an indoor briefing after several days of protests in Seattle. That was changed so city leaders could address the demonstrators in person.

Speeches from the officials were met with mixed reactions from the crowd. Organizers of the demonstration also addressed the crowd and asked them to let the city leaders have their turn on the microphone.

Both directions of I-5 were closed intermittently through downtown Seattle Tuesday evening as demonstrations continue. The I-5 closure stretched from I-90 to to SR 520.

Check tweets from Trooper Rick Johnson for developments on the rolling closures.

Traffic updates on KING 5 and WSDOT

The agency that investigates allegations of Seattle police misconduct received about 12,000 complaints about the police response to George Floyd protests this weekend.

The Seattle Office of Police Accountability (OPA) said Monday it is currently reviewing and processing the complaints, and investigations into the complaints will be its “top priority.”

About 10,000 people protested in Seattle on Saturday, and demonstrations turned violent leading to 57 arrests, mostly for burglary and assault. At least eight cars were burned and hundreds of buildings and businesses were damaged, according to Seattle police. 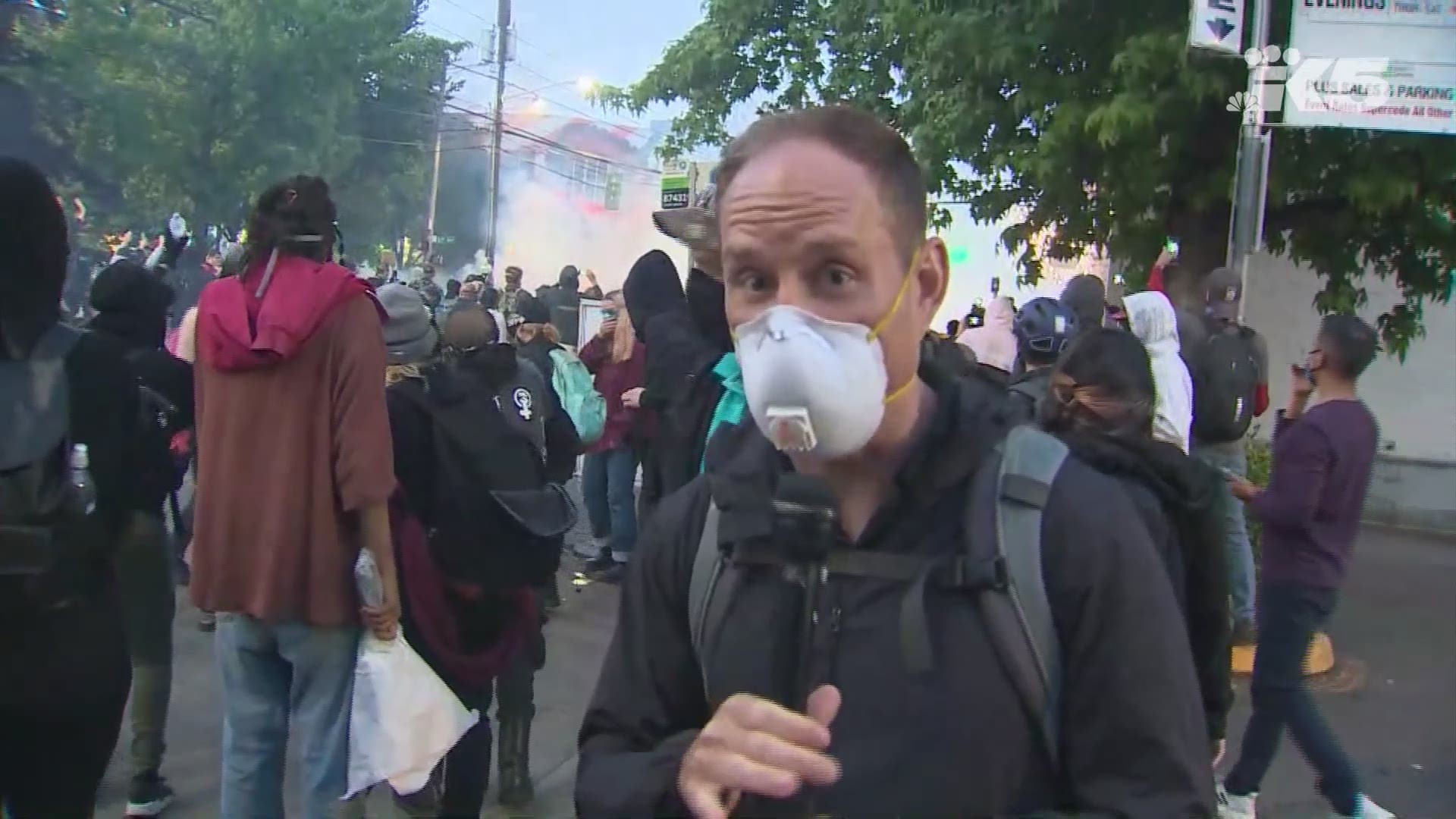