Woodward, Stuckart projected to move on to general election for Spokane Mayor

Woodward has received 15,983 votes, or 41.67 percent of ballots counted so far. Stuckart is in second, with 14,290 votes. The next count will take place Thursday. 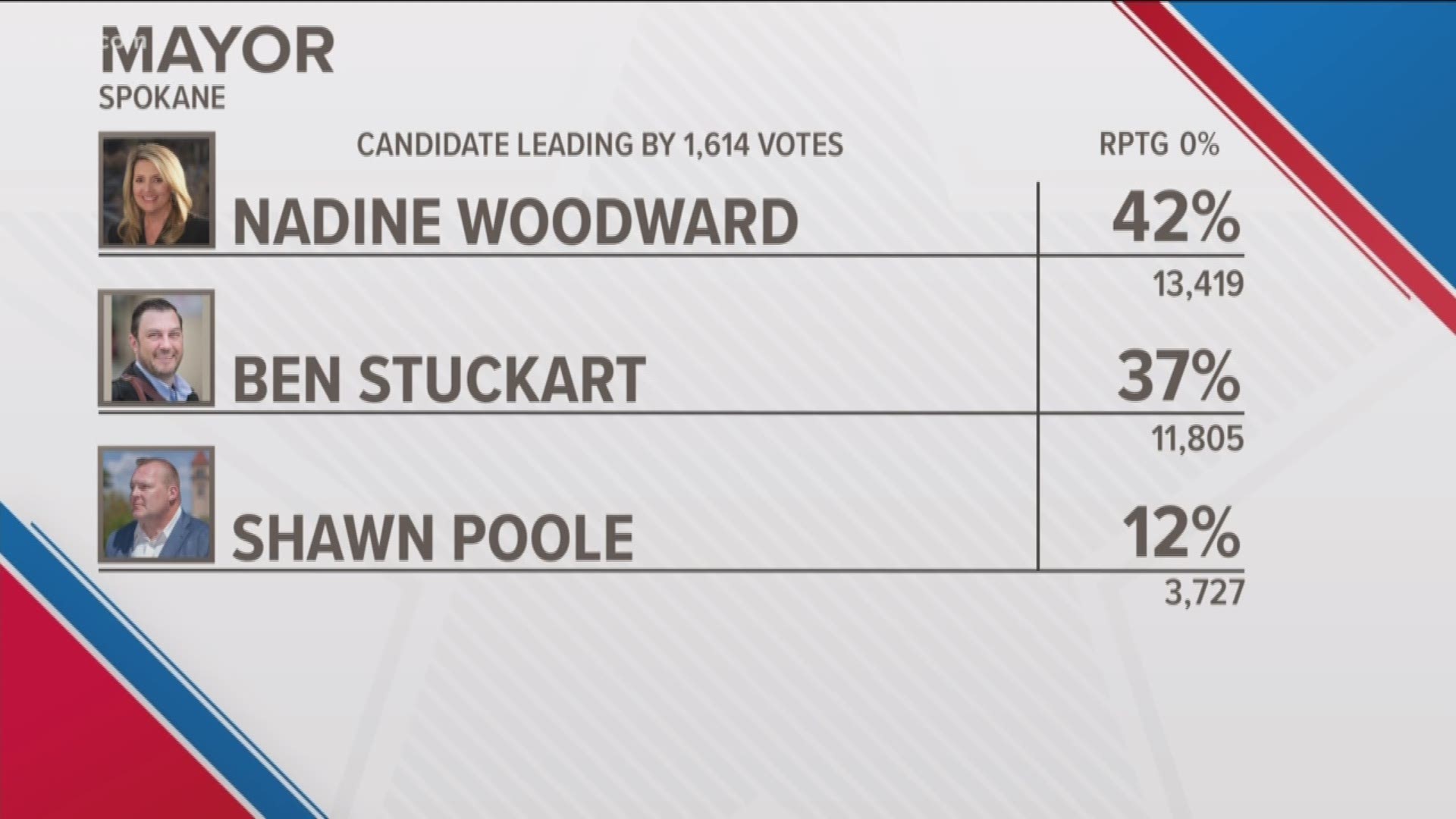 SPOKANE, Wash. — Nadine Woodward is still leading the Primary for Spokane Mayor after the third ballot count was completed at 3:54 p.m. on Thursday.

Ben Stuckart currently sits at second in the race with 16,733 votes, or 37.26 percent of votes counted.

KREM is projecting Woodward and Stuckart to move on to the general election in November. One of them will replace current Mayor David Condon, who cannot run again due to term limits.

Woodward talked about the needs for "common sense for Spokane solutions" for the upcoming mayor in a speech at her campaign's primary election party, which echos her campaign slogan.

"We need to work for common sense for Spokane solutions to reduce homelessness, increase public safety, and to have an economic vision where we will work with our neighboring partners and we will develop the I-90 corridor and we will bring great jobs and businesses to our city," Woodward said.

Stuckart said in a speech to the crowd at his primary election party that he is running to improve Spokane in the same way improvements were made to Sprague Ave.

"The reason I am running is I believe we can have walkable neighborhoods, with housing variety and we can replicate what we did on Sprague Avenue all over the city of Spokane,” he said. “Walkable communities create actual community in Spokane, and that’s why we all live in Spokane because we believe in a better community.”

Of the five other candidates on the ballot, Shawn Poole currently sits at third place with 4,663 votes so far, or 12.16% of the vote.

Jonathan Bingle sits at fourth place with 2,404 votes so far, which counts for 6.27% of the vote.

Kelly Cruz is currently sitting in last out of those who appeared on the ballot with 870 of votes, or 2.27% of votes.

A sixth candidate, Nicolette Ocheltree, is running a write-in campaign during the Primary. Currently, the Spokane County Elections Office has counted 147 write in ballots but it is not clear if all of these are for Ocheltree. If they are, this would put her in sixth and last place.

The election won’t be finalized until Aug. 20 and additional counts will take place in the coming days, with the next count projected to take place on Thursday at 6 p.m.