What's the limit of presidential powers? New book by UW profs has answers

After the wild popularity of their course on executive power, the professors co-authored a book titled The Limits of Presidential Power: A Citizens Guide to the Law. 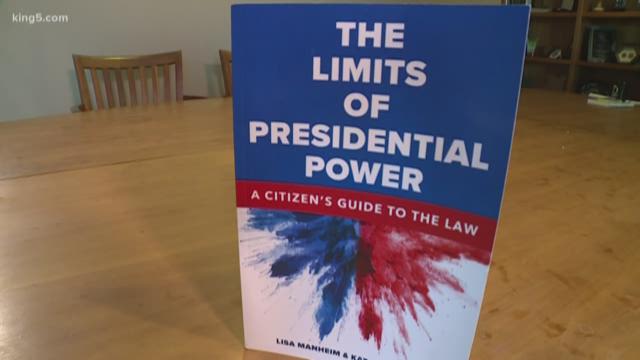 Think back to your civics lessons. How much do you remember? A pair of University of Washington professors just published a book to help refresh your memory. It's in response to an onslaught of questions about the powers of the presidency.

“We describe it as a crash course in the laws of presidential power,” said Kathryn Watts, a UW professor and co-author of The Limits of Presidential Power: A Citizens Guide to the Law.

She and Lisa Manheim hatched the idea for the book last year when they taught a class on executive power.

“It was extremely popular. There was a waitlist at first when the course launched. It was full to capacity. Members of the public asked if they could sit in as well, but due to space constraints we had to limit it to our law students,” Watts said.

So they started writing a guide to the presidency, meant for the general public.

Here's one that comes up a lot -- "What is an executive order? Can the president just make laws with the stroke of a pen?"

“Yes, the president can write executive orders, sign them with the simple stroke of a pen, but he can't change the law. He can't make law. The power to make the law rests in Congress,” Watts said.

Another question is about climate change. Can one president undo years of policy?

States like California and Washington are pursuing policies on their own. That can dull the impact of what The White House is trying to do. Also, courts can block the president from accomplishing certain goals.

Watts says she hopes the guide will help people understand how their country is changing, and how they can get involved.

The co-authors both worked as law clerks for Supreme Court justices -- Manheim for Justice Anthony Kennedy and Watts for Justice John Paul Stevens.

They say they could update the book as laws change and more questions arise.