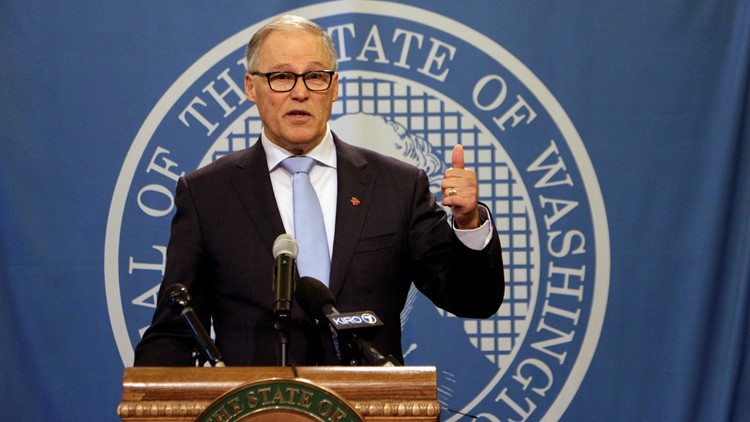 Photo by: AP Photo/Rachel La Corte
Washington Gov. Jay Inslee talks to the media after a state Supreme Court ruling that reinstated a severely limited version of his plan to cap carbon pollution in the state, Thursday, Jan. 16, 2020, in Olympia, Wash. He said the ruling just strengthens his commitment to get climate change-related bills through the Legislature this year.

OLYMPIA, Wash. — The Washington Supreme Court has reinstated a rule designed to cap carbon pollution in the state, but it has drastically limited its application.

In a 5-4 decision Thursday, the court said Democratic Gov. Jay Inslee's rule cannot apply to companies that sell or distribute petroleum or natural gas because they don't make their own emissions. However, the Clean Air Rule can apply to refineries, power plants, and factories that create their own emissions.

The Clean Air Rule had been struck down by a lower court judge after it was challenged by business groups.

"Washingtonians can rightfully expect their elected officials to take today’s news as higher motivation to act substantively against climate change in 2020,” Inslee said.

The four justices in the minority would have reinstated the rule in its entirety.