Gov. Inslee responds after Trump supporters breach gate at his Olympia residence and US Capitol

Trump supporters in Washington state gathered in Olympia to question the election’s validity. Part of the group breached a gate at the Governor's Mansion. 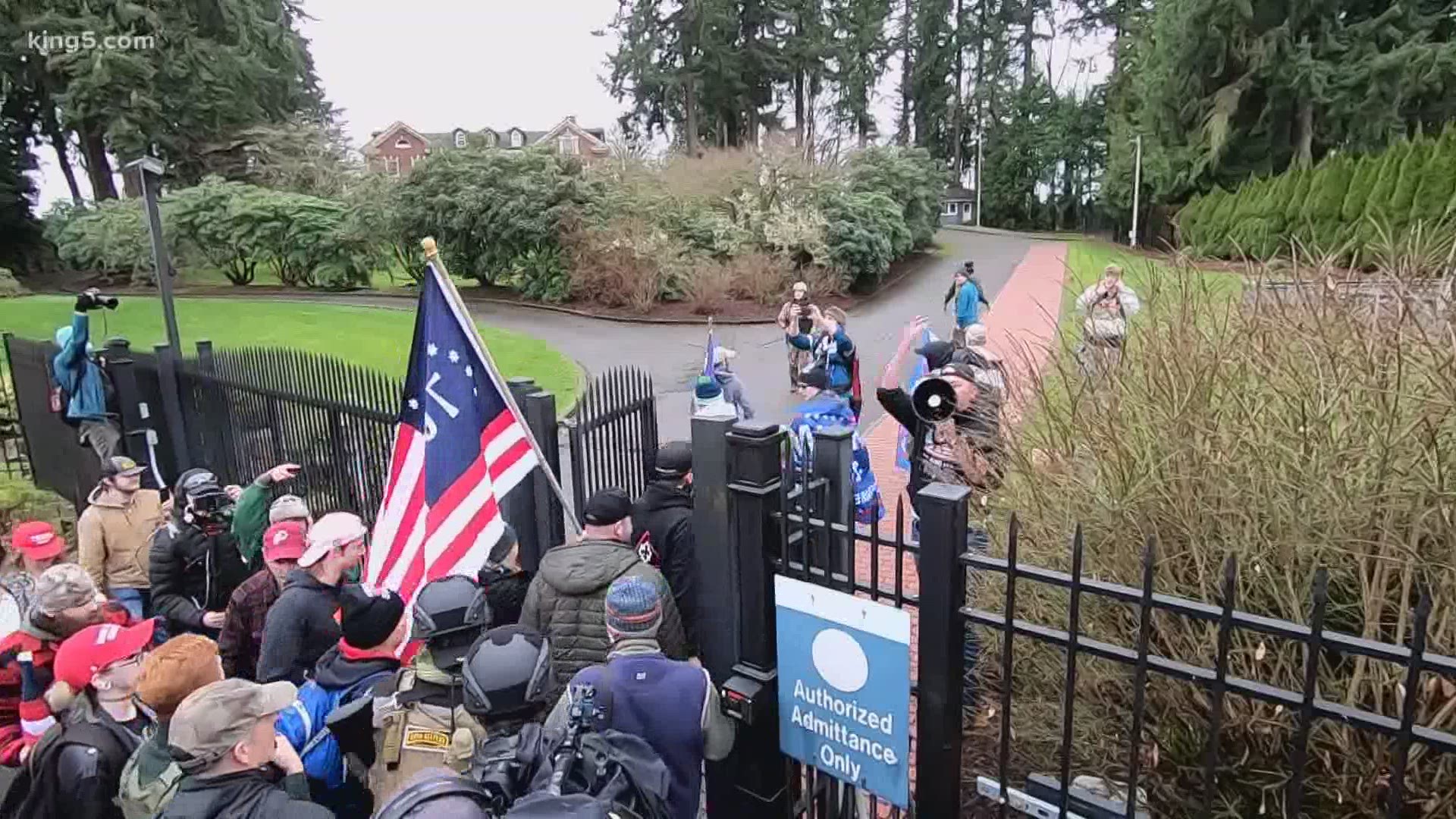 OLYMPIA, Wash. — A group of President Trump supporters breached a gate at the Washington Governor's Mansion in Olympia around 3 p.m. Wednesday after a peaceful rally earlier in the day.

After the gate was broken, about 50 people gained access to the property, with flags, signs and megaphones. The Washington State Patrol (WSP) confirmed that Gov. Jay Inslee was safe during the breach.

WSP said the group did not break into the governor's residence and left the property roughly 30 minutes after breaching the gate. The demonstration then moved back to public property at the Olympia Capitol grounds while a smaller group continued to rally.

Inslee responded to the breaches at his Olympia residence and the U.S. Capitol.

"We know today's been a very tumultuous day for Americans and Washingtonians for obvious reasons," said Inslee. "But I have some good news tonight to share with my fellow Washingtonians. Those acts of intimidation will not succeed in any way, shape or form. We will continue the work we're doing to protect the health of Washingtonians." Read the full transcript on the governor's Medium page.

This comes after protesters breached the nation’s capital Wednesday. A woman shot amid the chaos at the US Capitol has died.

Earlier in the day, several hundred Trump supporters peacefully rallied at the Washington state Capitol in Olympia over Congressional confirmation of presidential election results. About 300-400 people attended the rally, according to Washington State Patrol estimates.

The group, which was gathered at noon, sang “God Bless America” and chanted "USA."

Earlier Wednesday morning, lawmakers convened in Washington D.C. for a joint session to confirm the Electoral College results. Protests erupted outside the Capitol and government office buildings were being evacuated.

Though fellow Republicans were behind the challenge to Biden’s 306-232 Electoral College victory, Senate Majority Leader Mitch McConnell sought to lower tensions and argued against it. He warned the country “cannot keep drifting apart into two separate tribes” with “separate facts.”

McConnell declared, “The voters, the courts and the states all have spoken."

But other Republicans, including House GOP leaders among Trump's allies, were acting out the pleas of supporters at his huge Wednesday rally up Pennsylvania Avenue outside the White House to “fight for Trump.”

The last-gasp effort is all but certain to fail, defeated by bipartisan majorities in Congress prepared to accept the November results. Biden is to be inaugurated on Jan. 20.

RELATED: VERIFY: If both chambers of Congress object to votes for Biden, do the electoral votes go to President Trump? 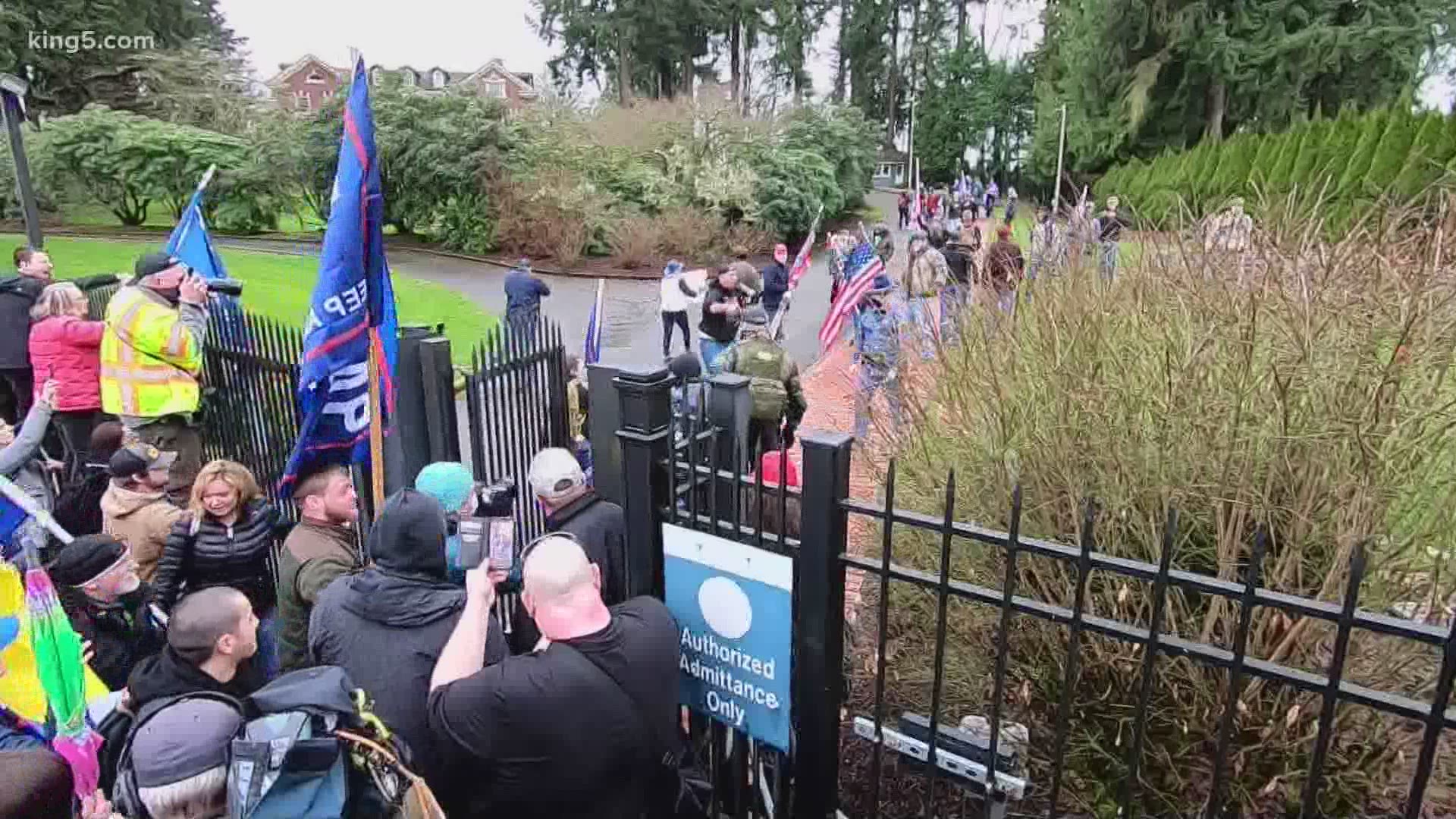