Lawmakers let the clock run out on the third special session. 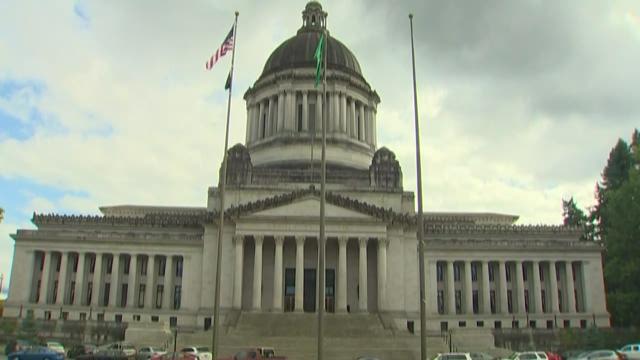 OLYMPIA, Wash. - The Latest on the Washington Legislature as it is set to adjourn its third special session (all times local).

The House and Senate have official adjourned their third special session, but lawmakers left on a sour note after a dispute over a water rights bill prevented a vote on a two-year capital budget.

Legislative leaders had previously said they were likely to adjourn earlier in the day after negotiations broke down Wednesday on a water rights bill that was tied to passage of a new construction budget for the state. Once it became clear that no progress would be made - even on whether or not to adjourn - the exodus began, first by the House Democrats, followed by the other caucuses.

A few lawmakers stayed behind to officially gavel out.

Gov. Jay Inslee expressed disappointment that lawmakers let the clock run out on their third overtime session without reaching an agreement that led to a vote on a new two-year capital budget.

"I think Washingtonians should feel rightfully disappointed that the legislature did not produce a construction budget that is so important for building schools, adding classrooms, taking care of our mental health facilities, and building community facilities across the State of Washington," said Inslee.

Inslee criticized Republicans for using a dispute over a water rights bill as leverage on a vote on the budget that pays for construction projects across the state.

He said he hoped that "calmer minds may prevail" in the coming weeks that would lead to an agreement so that he could call lawmakers back for another special session for a final vote.

The political rancor at the state Legislature is likely to go right to the bitter end, as lawmakers can't even agree to adjourn, raising the possibility that they would instead just let the clock run out at midnight on the third special session.

Legislative leaders had previously said they would adjourn Thursday after negotiations broke down on a water rights bill that was tied to passage of a new construction budget for the state.

But House Republican leader Dan Kristiansen said that once he informed Democratic leaders that his caucus planned a procedural move to try and pull the water bill to the floor to force a vote, the Democrats have refused to take to the floor and might instead wait for the clock to run out. Democratic leaders say they're waiting for the Republican-led Senate to either pass the capital budget or adjourn, and that they won't vote on a bill that is not agreed to.

"This has turned into an urban versus rural war," said Kristiansen during a news conference Thursday evening.

Gov. Jay Inslee said he would only call the Legislature back town for another session if they reach a deal that allows a vote on the two-year $4 billion capital budget that has already been agreed to by all four caucuses.

Washington lawmakers are preparing to adjourn their marathon legislative session for the year, but are leaving on a negative note after negotiations broke down on a water rights bill that was tied to passage of a new construction budget for the state.

Legislative leaders planned to adjourn Thursday, the last day of the most recent special session, though negotiators said they would continue their work next week on the water issue. Gov. Jay Inslee said he would only call the Legislature back town for another session if they reach a deal that allows a vote on the two-year $4 billion capital budget that has already been agreed to by all four caucuses.

Republicans in the House and Senate say that a fix to a recent state Supreme Court known as the Hirst decision must be passed first. That court ruling effectively limited the use of new domestic wells in certain rural areas when it harms senior water rights.

"A permanent solution for the Hirst decision is critical for all 39 counties in the state, cities in the state. Since there are appropriations in the capital budget, the two are linked in multiple ways," Senate Majority Leader Mark Schoesler (R-Ritzville) told KING 5 Thursday.

Schoesler said his caucus would not consider de-coupling the two issues, despite the urging of Governor Inslee and Senate Democrats.

"The key thing here is that the capital budget is agreed to; there is no dispute," said Senator David Frockt (D-Seattle). "This bill will pass unanimously, and really it’s being tied artificially to this other policy, and as I said before, it’s not that we don’t think the other policy doesn’t deserve a solution, but it’s going to require a compromise, where maybe not everyone gets everything they want."

Due to the impasse, the more than four billion dollar capital budget remains in limbo, which includes more than one billion dollars in school construction projects, over the next two years.

Fifty projects are on the capital budget list, including more than a dozen in Snohomish, King and Pierce Counties according the Office of Superintendent of Public Instruction.

Without state funding to match local dollars, a number of these projects could potentially be delayed.

Nine projects are dependent on state funding to move forward, according to OSPI.

The capital budget also includes around $16 million in improvements to Western State Hospital, according to the Office of Financial Management and $13 million in wildfire prevention.