Based on early results, four Republican state senate seats could also be in play for Democrats, as well as nearly a dozen house seats. 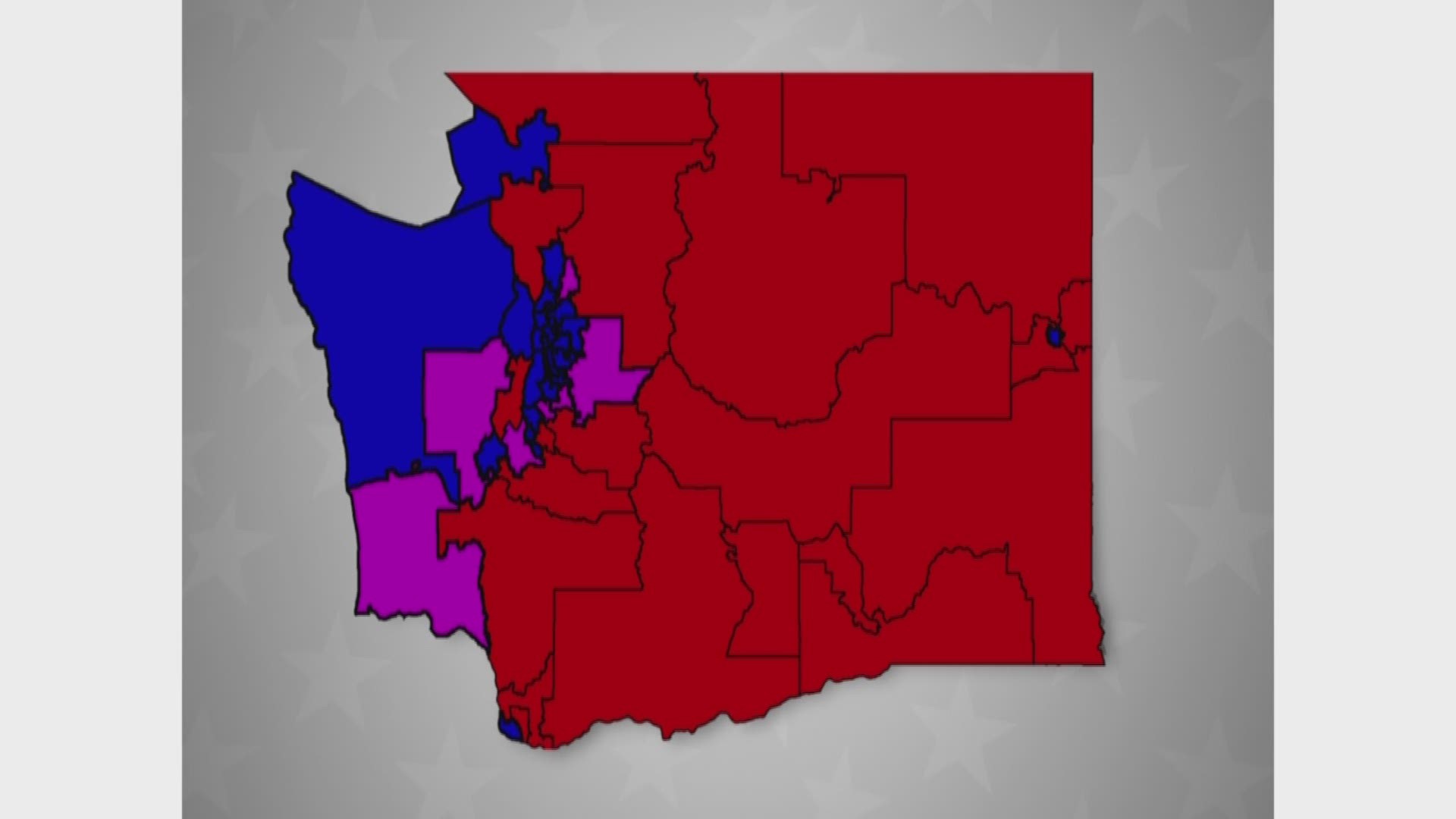 Washington Democratic candidates in state legislative races had a better than expected primary night on Tuesday, even leading in some historically conservative areas.

Based on early results, four Republican state senate seats could also be in play for Democrats, as well as nearly a dozen house seats.

Democrats hold a narrow majority in the state legislature currently, with the Senate split 25-24 and the House 50-48.

Washington state Democrats hope to use the midterms to widen their lead; while Washington Republicans hope to defend as many seats as possible. Ahead of the primary, the State Republican Party Chairman said he hoped to flip one seat in each chamber, to essentially maintain a tie.

Here are the districts that will be closely watched heading into the fall.

Democrat Bill Ramos, an Issaquah city councilmember, is currently leading over Republican Chad Magendanz -- a former state House member who left the House to run for state senate in 2016 but lost in a tight race against incumbent Sen. Mark Mullet of Issaquah.

Represents part of King and Pierce Counties including Federal Way, Des Moines, Milton, Algona and Pacific and part of Auburn.

Claire Wilson, a Federal Way School Board member, emerged as the Democrat who will advance to the general election.

Democratic incumbent Mike Pellicciotti (D) leads Republican Linda Kochmar who is trying to win back her former seat. Note, both 30th district House seats were won by Democrats in 2016.

This district includes part of Grays Harbor, Pacific and Wahkiakum

Republican Jim Walsh who won in 2016 and was a supporter of Trump will try to hang onto his seat this fall. His voter pamphlet statement promises to “fight the extreme Seattle agenda that’s forced too many into poverty.”

Democrat Erin Frasier, a first candidate, secured the second spot to challenge him. She held a slight lead on primary night and the days after, but now trails by just 128 votes.

Walsh won the district in 2016 in what was considered a political upset, becoming the first Republican to win the district in decades. His win proved part of a larger trend that year; Grays Harbor County voted for President Trump, turning the county red for the first time in more than 90 years.

As a result, Washington Republicans are targeting the Olympic Peninsula this year and trying to retain the voters who went Republican in 2016.

Democrat Brian Blake is trying to hold onto his seat. He’s facing two Republicans during the primary, including a middle school teacher and Marine Corps Reserve Sgt. named Joel McEntire. According to the latest results, Blake has a comfortable lead with the two Republican candidates splitting the votes almost evenly among the two. It’s too early to know which Republican will secure the second spot and advance to the general.

Represents a crescent shaped district around the North, West, and Southern parts of the City of Spokane, and parts of North and Southwestern Spokane County, including Airway Heights, Medical Lake and Cheney.

This is an open seat since Republican Senator Michael Baumgartner announced he was retiring from the state legislative.

This is an open seat, since Holy is running for state senate.

Represents part of Pierce and Kitsap Counties including part of Bremerton, Port Orchard and Gig Harbor.

Republican Jan Angel is retiring, so this is an open seat.

Democrat Connie FitzPatrick, a first time candidate with a Navy background, is currently leading in the race over incumbent Republican Jesse Young.

Note, there was a second Republican candidate in the race who took a percentage of the votes from Young.

Democratic challenger Joy Stanford, a first time candidate with a background as a Medicare consultant, is currently leading. Republican incumbent Michelle Caldier took the second spot; another Republican candidate in the race took a share of the votes.

Represents most of Whatcom County including Point Roberts, Blaine, Ferndale, Lynden, Nooksack, Everson and the northern part of Bellingham.

Republican incumbent Doug Ericksen will have a competitive race in the fall, based on primary results. He received nearly 46 percent of the vote, based on the latest primary results. However, his two Democratic challengers combined took more than 54 percent, collectively.

Democratic challenger, Justin Boneau, a first time candidate and Navy veteran, is currently leading over Republican incumbent Luanne Van Werven. A second Republican in the race did take a percentage of the vote from Van Werven, making the race between the top two candidates a dead heat.

Moderate Democrat Steve Hobbs is poised to keep his seat.

Both House positions 1 and 2 are open seats, since the two Republican incumbents decided not to run for re-election.

Primary results indicate these will be extremely competitive races between the Republicans and Democrats in the fall.