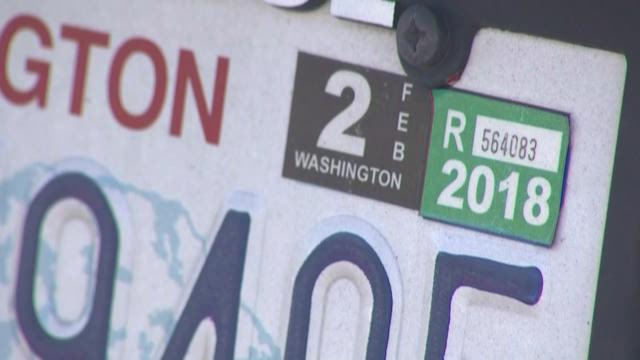 Two similar Eyman-led initiatives, passed in 1999 and 2002 by voters, both demanded $30 tabs. Both of those initiatives faced legal challenges and were ultimately declared unconstitutional.

Eyman said since then, state and local governments have increased taxes and fees on car tabs, sending them "skyrocketing" past 1999 rates.

"Basically what's happened is that barnacles have grown on top of our $30 tabs and this new initiative scrapes those barnacles away," Eyman said. "What this initiative is about is allowing the voters to have a do-over. Now that you know how much these car-tabs are going to cost, do you think this is fair?"

He's referring to increased car-tab fees that left a lot of drivers feeling sticker shock when their car-tab taxes doubled and in some cases tripled after the passage of Sound Transit Three.

The 25-year, $54-billion Sound Transit Three transit package was approved by voters in November of 2016. It will pay to expand mass transit and light rail service within the Sound Transit District that includes King, Pierce, and Snohomish counties.

After months of public outcry over increased ST3 taxes, Eyman felt the timing was right for a new car-tab initiative.

Transit supporters on Tuesday were quick to criticize Eyman's initiative.

"We need solutions to address our congestion in our region, and giving people a reliable option to get out of traffic is how we do that. Voters agreed and approved it and Sound Transit is moving forward with that now," said Abigail Doerr, with the Transportation Choices Coalition. "Don't sign Eyman's pledge. Decline to sign, and remember that transit is important for our communities."

If Eyman's initiative were to pass, Sound Transit estimated it would lose between $6.9 billion and $8.1 billion, depending on which taxes are repealed and to what extent. Analysis of the total financial impacts, including revenue loss and borrowing costs, is still underway.

Sound Transit said the reduced revenues would significantly impact it's projects, and could cause the agency to cancel or delay some projects throughout the Sound Transit District.

Sound Transit's current plan involves building out a 116-mile the light rail system to eventually reach Tacoma, Everett, downtown Redmond, West Seattle, Ballard, South Kirkland, and Issaquah. The agency said those are among the projects that might be impacted.

On Tuesday, transit riders were already expressing concern about that possibility.

"I've noticed people will more often go for a tax break rather than spend money on local transit," said light rail rider Sabrina Vanwinkle. "Just for the sake of a couple dollars. And I hate that. I think we need transit, no matter what. It helps tons of people."

In order to move his initiative forward to the state legislature and possibly the November 2018 ballot, Eyman must collect 260,000 signatures by the end of December. The petition is available online.

Adding to the controversy, Washington Attorney General Bob Ferguson announced a $2 million lawsuit against Eyman in March over alleged campaign finance violations. Part of the suit included Ferguson asking the court to bar Eyman from participating in any political committees moving forward.