Washington is a not right-to-work state, meaning employees must pay a fair share fee for representation, even if the individual chooses to opt out of the union. 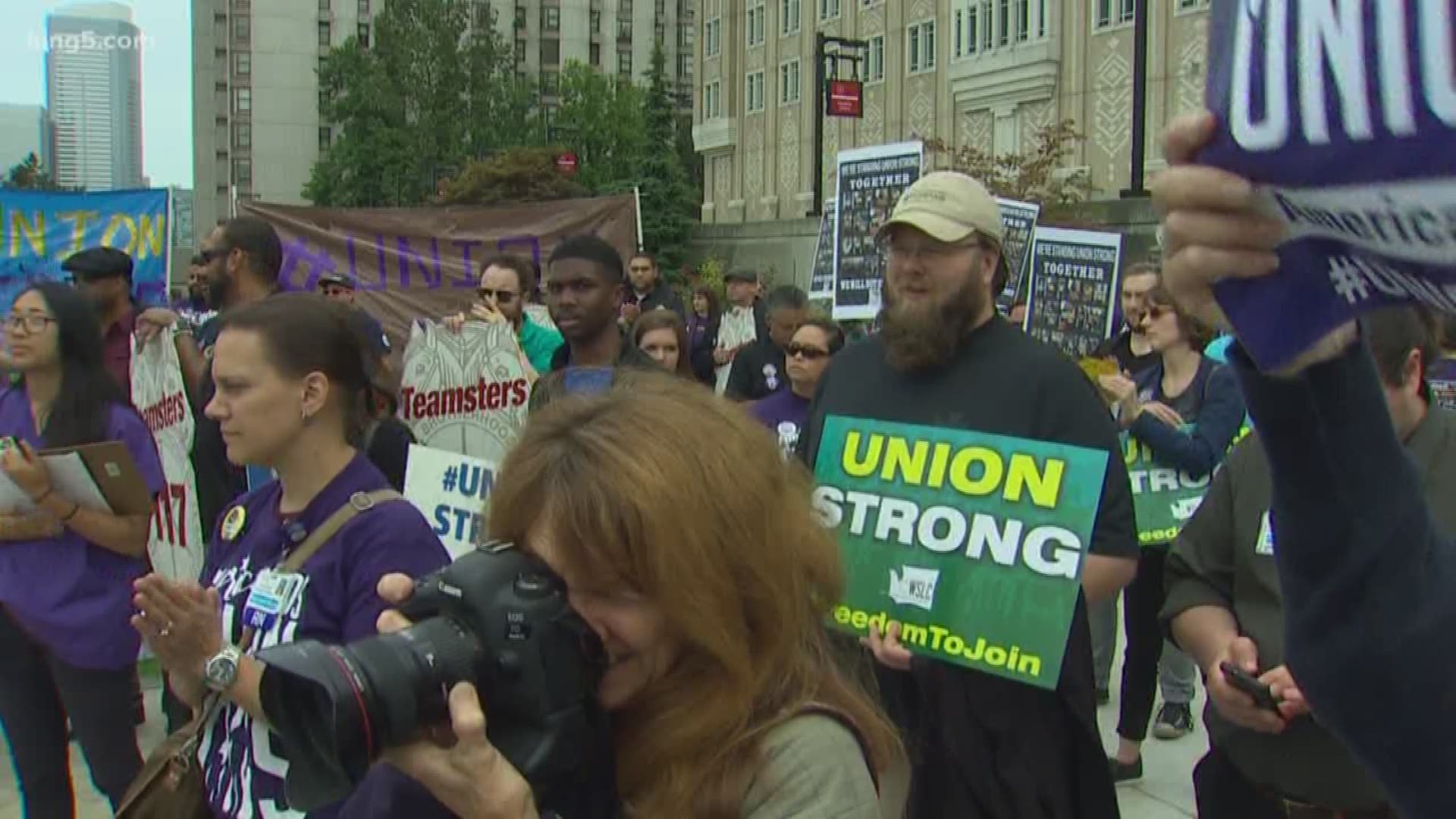 Justices decided 5-4 that non-union public workers cannot be forced to pay fees if they want to opt out of the union.

The ruling is especially significant for Washington, which is not a right-to-work state. That means employees must pay a fair share fee for representation, even if the individual chooses to opt out of the union.

The decision was met with strong opposition by Washington labor leaders and Democratic politicians, in one of the most pro-union states in the country. Stats show Washington state maintains one of the highest rates of union membership, according to the Bureau of Labor Statistics.

“This is given us an opportunity to have real conversations with our coworkers about the importance of our union,” said Kimela Vigil a social worker whose union is impacted by the ruling.

Vigil says local unions had anticipated the decision for more than a year, stepping up organizing and outreach efforts as a result.

“By far, the large majority have all said they're going to continue paying their dues, supporting the union,” continued Vigil.

“We need to focus on organizing. We need to focus on talking with our members showing what the value is with unions. I think it will grow power and numbers we have. We will do much more direct talking and organizing,” echoed Lynne Dodson, the Secretary Treasurer of the Washington State Labor Council AFL-CIO.

However, supporters of the decision, including the Washington Policy Center, believe the decision could impact the unions’ bottom line, ultimately making them less politically powerful.

"They have a whole political agenda that tends to support one side of the political spectrum," said Paul Guppy, Vice President for research at the Washington Policy Center, referencing unions' historic, reliable support of Democratic candidates.

“The union is going to have to change their model and be based on persuasion and show members that's it's worthwhile to pay dues and they're getting good service for that," Guppy continued. “I think it will make the unions less political, and I think that's a good thing.”

“Today’s decision is a loss for working people and yet another win for corporate special interests that have spent decades funding political campaigns and lawsuits designed to chip away at workers’ rights. For more than a century, unions have organized to lift up the voices of workers who were otherwise unheard, and fought for fair pay, safer working conditions, and better benefits. Unions helped create the 40 hour workweek, workplace health and safety rules, child labor protections, and strengthen the middle class—and unions are still empowering workers in cities and states nationwide. I and other Democrats will continue to stand up for workers and their right to be treated fairly on the job, and I urge all Republicans in Congress who claim to care about the economic security of the middle class to work with us to strengthen the rights of workers.”

Today’s SCOTUS decision on Janus v. AFSCME is a win for teachers, police officers, firefighters and public servants, who shouldn’t be forced to join a political organization or government union. This decision rightly upholds their First Amendment rights. pic.twitter.com/Imqz3W8KDL

"The Supreme Court's decision on Janus v. AFSCME reaffirms that workers should be able to make their own choice, not be forced to pay into big labor's political coffers," said Chairman Heimlich. "This is incredibly significant, and it is yet another testament to the positive impact the 2016 Republican victory has had on individual liberties in this country. Without the selection of Justice Gorsuch, workers would continue to be unwillingly beholden to powerful union bosses and would not have the freedom to choose."

“With today’s Supreme Court ruling of the Janus decision, it’s a sad day for all of us, but especially for the labor movement,” said Chair Tina Podlodowski

“This case, backed by right-wing billionaire extremists, is intended to divide working people, to take away our freedom to join together in strong unions, and to further pad the pockets of the top one-percent.

“I stand in solidarity with the labor movement in Washington state, and so does the Washington State Democratic Party. No court decision is going to stop us from continuing to fight for all working families. Our state and our country need strong unions to fight back against an economy that’s -- frankly -- rigged to benefit the wealthy and powerful.