Sen. Patty Murray was first elected in 1992 and plans to run for re-election in 2022, but a KING 5 poll found 47% of registered voters said she should not run again. 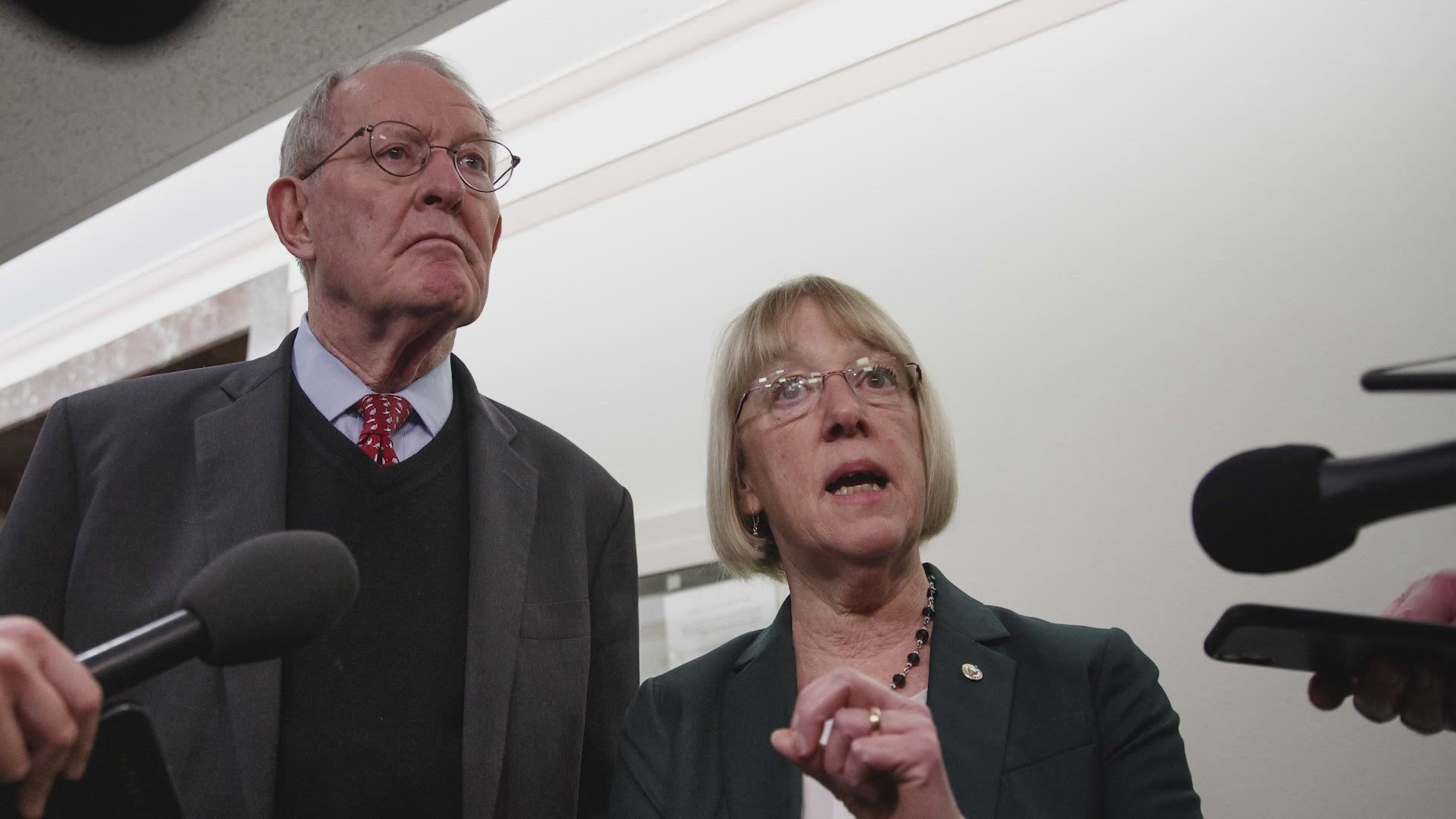 The poll was part of a series of questions about current events and issues, and asked a specific question about Murray, who plans to run for re-election in 2022.

The survey asked 650 Washington state adults, between April 29 and May 5, whether Murray should or should not run for a sixth term.

The results show 47% of registered voters suggested she "should not" run, with only 31% saying she should. Another 22% were not sure.

Murray had her strongest support for re-election among Democrats with 48% supporting a bid, as opposed to 16% of Republicans. And 56% of self-described independents also said she should not run for re-election.

The numbers were also consistent with most voters above and below the age of 50, saying she should not run for re-election, as well as voters on both sides of the Cascades.

Murray is the third highest-ranking Democrat in the U.S. Senate, and chairs the Health, Education, Labor and Pensions Committee. She was first elected in 1992, and hasn't had a close race in more than a decade. Murray has also built up a campaign war chest that sits close to $4 million dollars, according to the FEC, 18 months away from election day.

But that hasn't deterred Pasco Republican Tiffany Smiley, who has announced her candidacy to replace Murray.

"She has been in for 30 years. I was 11 years old when she was elected. And I would like to say that Washington state is better off, but it's just not the case. She's come to a point where she's put the other Washington ahead of Washington state," said Smiley in an interview with KING 5 on Friday.

Smiley has championed herself as a Veteran's advocate, ever since her husband was seriously wounded in a suicide bombing in Iraq in 2005.

"When I took VA reform to the White House, I was standing up for every single person. And I think you know, a lot of, there's a lot of division in our country today. And there's a lot of politicians, Patty Murray included, who are more focused on dividing," she said.

Smiley acknowledged she has started campaigning early for a reason. The Washington Post, in a opinion piece, also noted how her campaign website is careful to avoid the words related to her party, or the former president.

"I'm a political outsider. I've never run for office before. But I also think that speaks to the power of our service to this country and servant leadership," said Smiley. "I need a long runway, I want to get out and meet everyone as safely as possible here in Washington state. I want to hear the stories. I want to know how we can help, how we can create a movement."

KING 5's political analysts suggested that the poll still showed support among Democrats, which is key in a left-leaning state.

"What I believe is, when you've had a person who has been a senator for a long time, people have a tendency to lean to maybe change is important," said KING 5 News Political Analyst Ron Sims, who served as King County Executive and in the Obama Administration.

He still believes Murray is in good position for re-election, but that perhaps the numbers show not only is there political fatigue after the events of 2020, but that she will need to actively campaign in parts of the state that have had an influx of new residents, that may not be as familiar with her career.

"There's unknowns and people who win the unknowns and the millennials are the people that she's going to have to reintroduce yourself to," he said, adding, "I think it's what the polls indicate if I were advising her, I would say there's, you need some new friends. You need to reintroduce yourself to people, what you've done, and how well you've done."

"Keep in mind that Sen. Murray is a top and influential leader in Washington, she's a strong incumbent, she's got a significant war chest to start off with. She is running full steam ahead. So that question of whether or not she should run again is not what's going to be on the ballot," said McClellan. "So, when I'm looking at from a campaign perspective, and my experience in a campaign, I'm not overly concerned about it, in and of itself, but you would want to see some other numbers."

The Murray campaign also downplayed the poll result, and offered a quote from Washington Democratic party chair Tina Podlodowski which read, "What I hear from voters across the state constantly is that Patty Murray has a strong record of standing up for Washington state families and putting them first—most recently by fighting for COVID-19 relief to help our schools reopen safely, support hard-hit small businesses, and deliver on family-friendly policies like affordable child care for everyone who needs it.

"Patty Murray goes to work every day to fight for Washington state workers and families and stand up for progressive solutions to the big challenges we face. The last thing Washington voters want to do is help a Trump-supporting Republican challenger get Mitch McConnell back in power and take our state and country in the wrong direction."