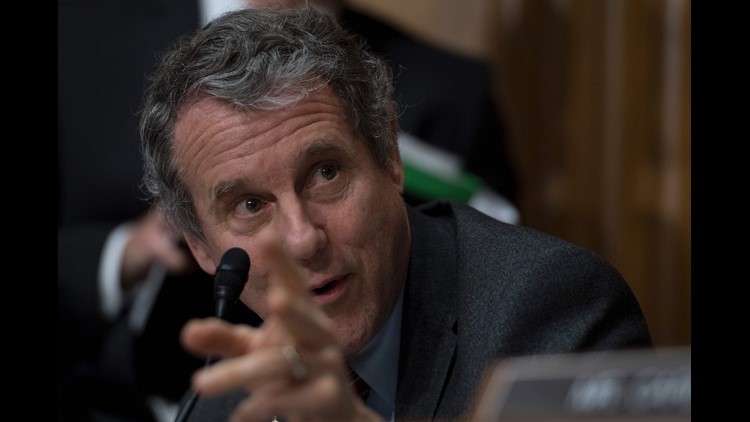 <p>US Senator Sherrod Brown, D-Ohio, interrupts US Senator Pat Roberts, R-Kansas, as he speaks during the conformation hearing for Steven Mnuchin as he testifies before Senate Finance Committee on Capitol Hill in Washington, DC, January 19, 2017.</p>

WASHINGTON — Led by Sens. Sherrod Brown of Ohio and Ron Wyden of Oregon, a clutch of Senate Democrats temporarily blocked committee votes on two of Trump's Cabinet nominees Tuesday by refusing to participate in a vote.

WASHINGTON — Led by Sens. Sherrod Brown of Ohio and Ron Wyden of Oregon, a clutch of Senate Democrats temporarily blocked committee votes on two of Trump’s Cabinet nominees Tuesday by refusing to participate in a vote.

The Senate Finance Committee was scheduled to vote Tuesday morning on Steve Mnuchin, tapped by the new president to be Treasury secretary. But Brown and other Democrats refused to attend the session, thus denying Republicans a quorum and preventing the vote from occurring.

The committee was also scheduled to vote Tuesday on Trump’s choice to lead the Department of Health and Human Services, GOP Rep. Tom Price of Georgia.

Brown has vociferously opposed Mnuchin, and his spokeswoman said Tuesday that he organized the boycott at the last minute.

Brown has objected to Mnuchin’s "cozy ties to Wall Street" and sharply questioned his leadership of a bank that was involved in questionable foreclosure practices.

Mnuchin "failed to answer critical questions about the fortune he made while military service members, seniors, and working families got kicked out of their homes,” Brown said in a Jan. 19 statement announcing his opposition to the nominee.

Republicans on the panel blasted the move as an unprecedented “dereliction of duty” and a partisan jab that would damage comity in the Senate.

“It’s hard for me to understand this,” said Sen. Orrin Hatch, R-Utah, the panel’s chairman. “These are two really fine men. Both are sacrificing financially and otherwise to serve the country.”

He called the Democrats move “amazingly stupid,” adding: “I hope they’ll get their heads on right.”

After a short meeting attended only by a handful of Republicans, Hatch was forced to recess the session. He said he would reschedule the vote as soon as possible.