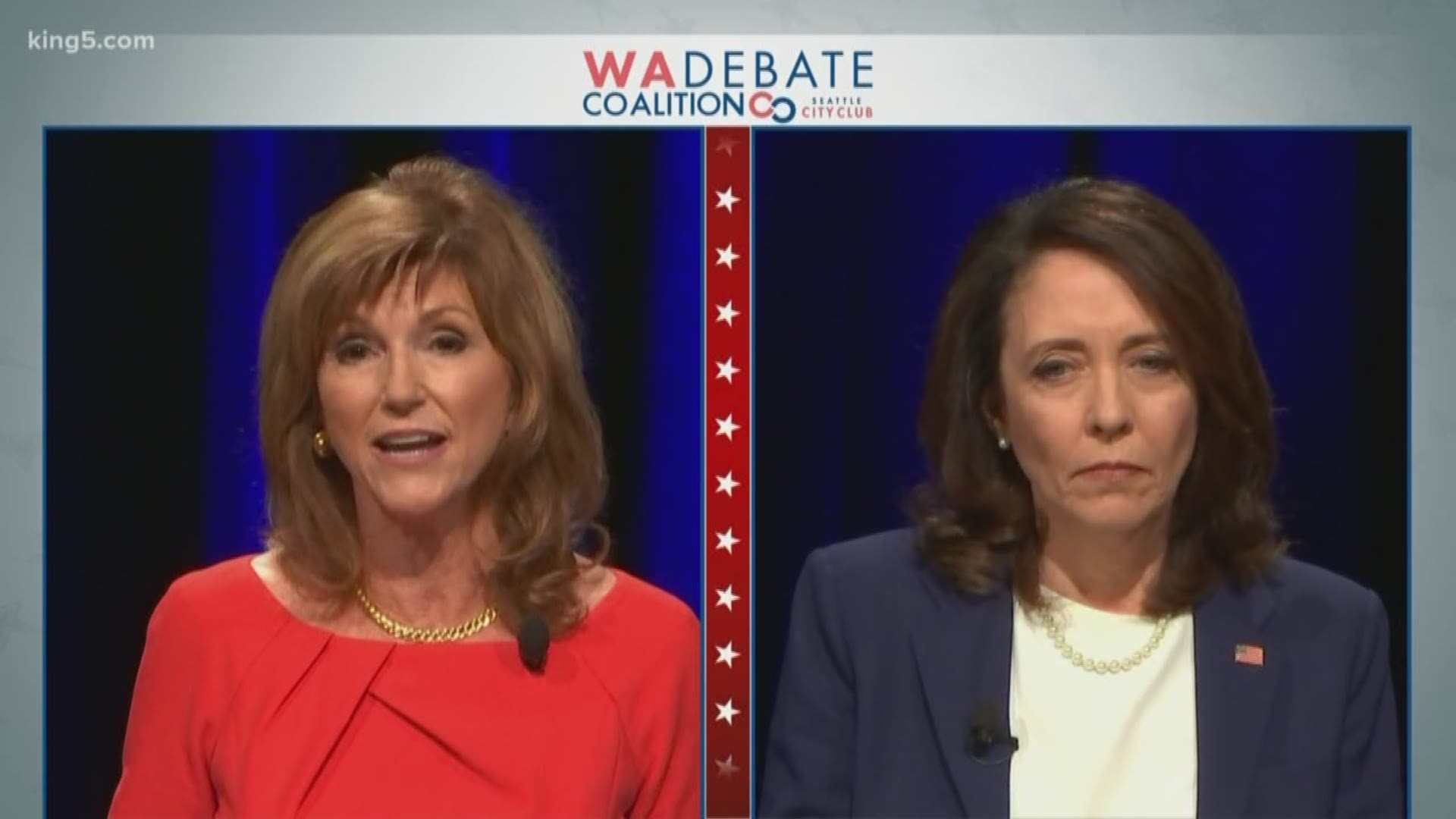 The candidates largely fell along party lines when debating a variety of topics, including trade and tariffs, gun policy, immigration, and border policy, health care, and foreign policy.

Cantwell, who is seeking her fourth term in office, agreed to the debate last month after initially declining due to logistical concerns with the date of the debate.

Hutchison served as the Washington state Republican Party chair for six years before stepping down earlier this year. Previously she worked as a TV news anchor.

Cantwell has raised nearly $9.9 million, and Hutchison has raised over $543,000, according to the Federal Election Commission.

Cantwell stressed the cost of trade tensions and tariffs on Washington’s agricultural industry, referencing an estimated $84 million in losses for the Pacific Northwest.

"We want to open up markets, not close them," said Cantwell. "The president has got to stop using tariffs as a first line of action and use it as a last line in trade disputes."

Hutchison, who on her website says tariffs should be “discouraged,” appeared more optimistic Monday about the administration's trade tactics, referencing the recently announced deal with Canada and Mexico.

"I've talked to the cherry farmers, and you know what they say, they're concerned about the uneven playing field that was in place long before President Trump was elected," said Hutchison. "The farmers are willing to experience a little short-term pain for long-term gain." 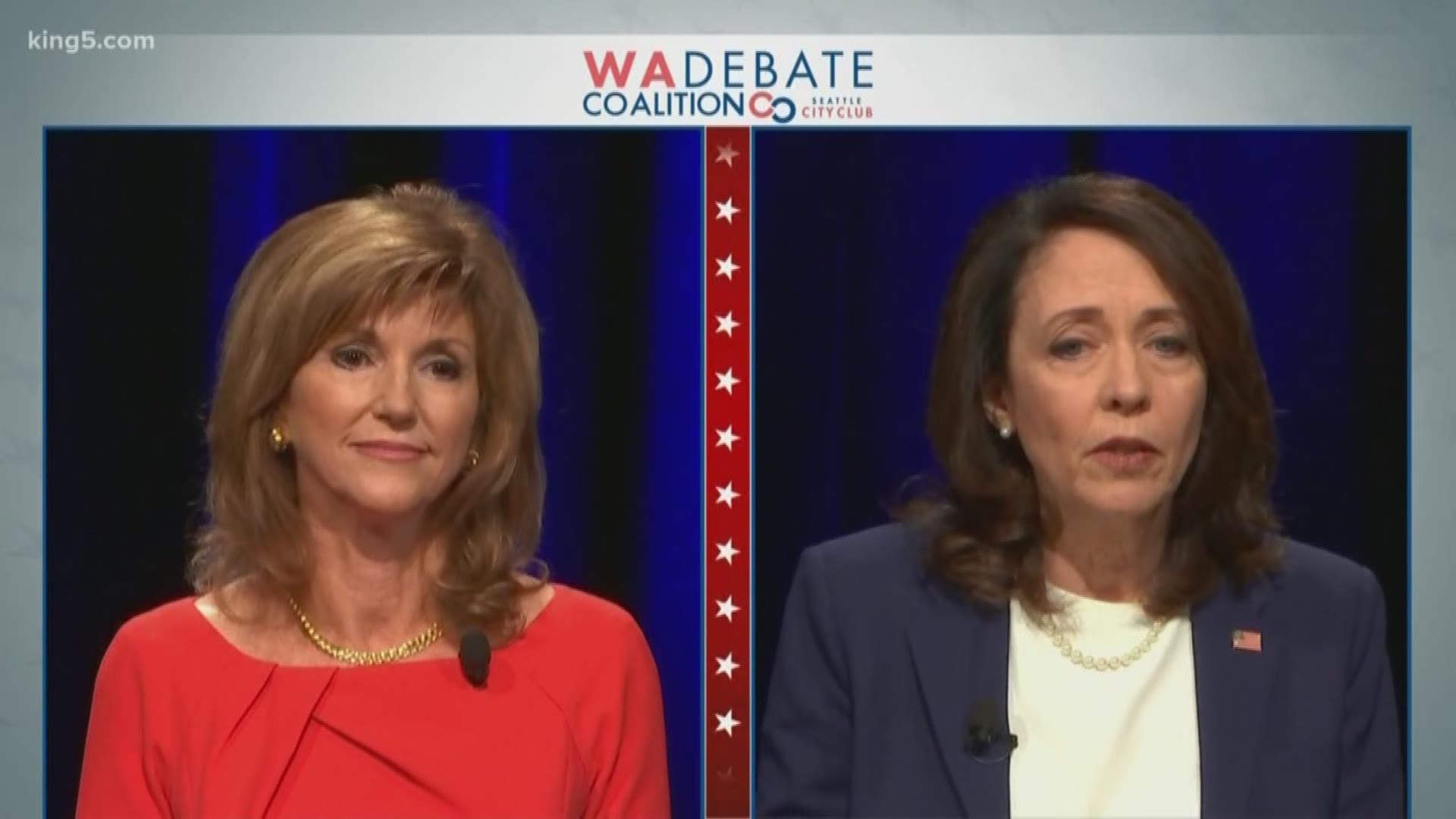 Cantwell said while border security is important, building a physical wall at the U.S.-Mexico border is a “waste of money.” Instead, she said we should invest in better technology at the border.

Whether it’s a physical wall or something electronic, Hutchison said we just need to make sure the border is secure.

On the issue of DACA, the deferred action for childhood arrival program that expired last year, Hutchison faulted Cantwell for voting against a Republican proposal to link DACA with increased border security.

"I think it’s too of important an issue to just allow the uncertainty for these children," responded Cantwell. "I would support a standalone DACA bill today, tomorrow, at any moment to make sure we resolve this issue."

Hutchison applauded President Donald Trump’s tax cuts as a win for Americans, spurring the economy. She said not only would she like to see the tax cuts made permanent, but she wants to see more tax cuts.

"We have 4 million new jobs since those tax cuts took effect," said Hutchison. “There is no denying people have more money in their pockets."

KING 5 has asked the Hutchison campaign for background on the number she cited.

A FactCheck.org article from August shows the job growth stats vary from state to state.

Related: How Strong have job gains been since the tax bill passed, via PolitiFact

Cantwell responded saying she would be happy to work to make middle-class tax cuts permanent, but that the Trump tax cuts did not benefit Washington’s middle class, because of changes to the state and local deductions.

Cantwell also said that Republicans want to privatize social security and Medicare in order to help pay for the tax cut bill.

A PolitiFact article from earlier this year found a similar claim to be false.

Cantwell called access to health care is "a universal issue and a basic right."

Hutchison, meanwhile, says believes the free market system remains the only way to lower the cost of medical care.

When asked whether she would have supported the Republican lead effort to repeal the Affordable Care Act last year, she responded "yes, but we would have to replace it with something workable."

"It has to be a bipartisan effort," said Hutchison.

"When you don’t provide solutions for the marketplace, uncompensated care runs up the cost for all of us, and makes all of our insurance more expensive," responded Cantwell.

Cantwell pushed for several gun policy reforms, including raising the purchase age for semiautomatic rifles to 21 years old, banning bump stocks, and implementing extreme person laws, which temporarily suspend a person’s access to firearms if they are at risk of harming themselves or others.

“The right to bear arm is not just about militia,” Cantwell said. “But it doesn’t mean that the United States Senate can’t do something to better protect our students at schools.”

Hutchison responded saying if an 18-year-old has the right to defend their country, they should have the right as a law-abiding citizen to own a gun. She said the real issue we should be focusing on is addressing mental illness, which could help prevent gun deaths.

She also argued a lot of gun laws “hurt women” who may need to defend themselves against a domestic abuser and want to sleep with a loaded gun next to their bed.

“For every attempt to curtail the legal rights of gun owners, we are putting some people at risk,” Hutchison said.

The candidates were asked about whether they support withdrawing the troops from Afghanistan, 17 years into the conflict.

"I think the troops we have there now are trying to protect the foothold we have in stabilizing that region, and when (Defense) Secretary Mattis says they should come home, those limited troops, what he’s trying to do now is trying to get this discussion between all parties to happen, and that’s what I support," said Cantwell.

Hutchison, meanwhile, pointed to Cantwell's votes on funding the war and said she would not "cast votes without being absolutely sure that when we go to war, we have an exit strategy and know why we're there."

She evaded directly answering a follow-up question on whether she would vote against funding troops in Afghanistan.

"I trust the President and General Mattis, our Secretary of Defense, and I trust, most of all, our armed forces and our well-trained military that knows how to fight and is ready to be called up when they’re needed, as long as it’s the right war," said Hutchison.

Senator Cantwell, who opposed Justice Kavanaugh's confirmation, called the FBI investigation into the allegations against him as "rushed and incomplete."

"We didn’t have a full investigation. We had an investigation once various people came forward, not a complete investigation and given the challenges we face in society with institutions ignoring this evidence—I wanted to make sure we didn’t rush to curtail that investigation," said Cantwell.

Hutchison, meanwhile, has accused Democrats of rushing to judgment without corroborating evidence or due process. She called the confirmation hearings "a national disgrace."

"The Democrats had knowledge of a woman’s letter two months before it was investigated, and I put the disgracefulness of that hearing squarely at the feet of the Democrats," said Hutchison.

Cantwell, meanwhile, has said she believes Dr. Christine Blasey Ford, who accused Justice Kavanaugh of sexual assault decades ago when the two were in high school. 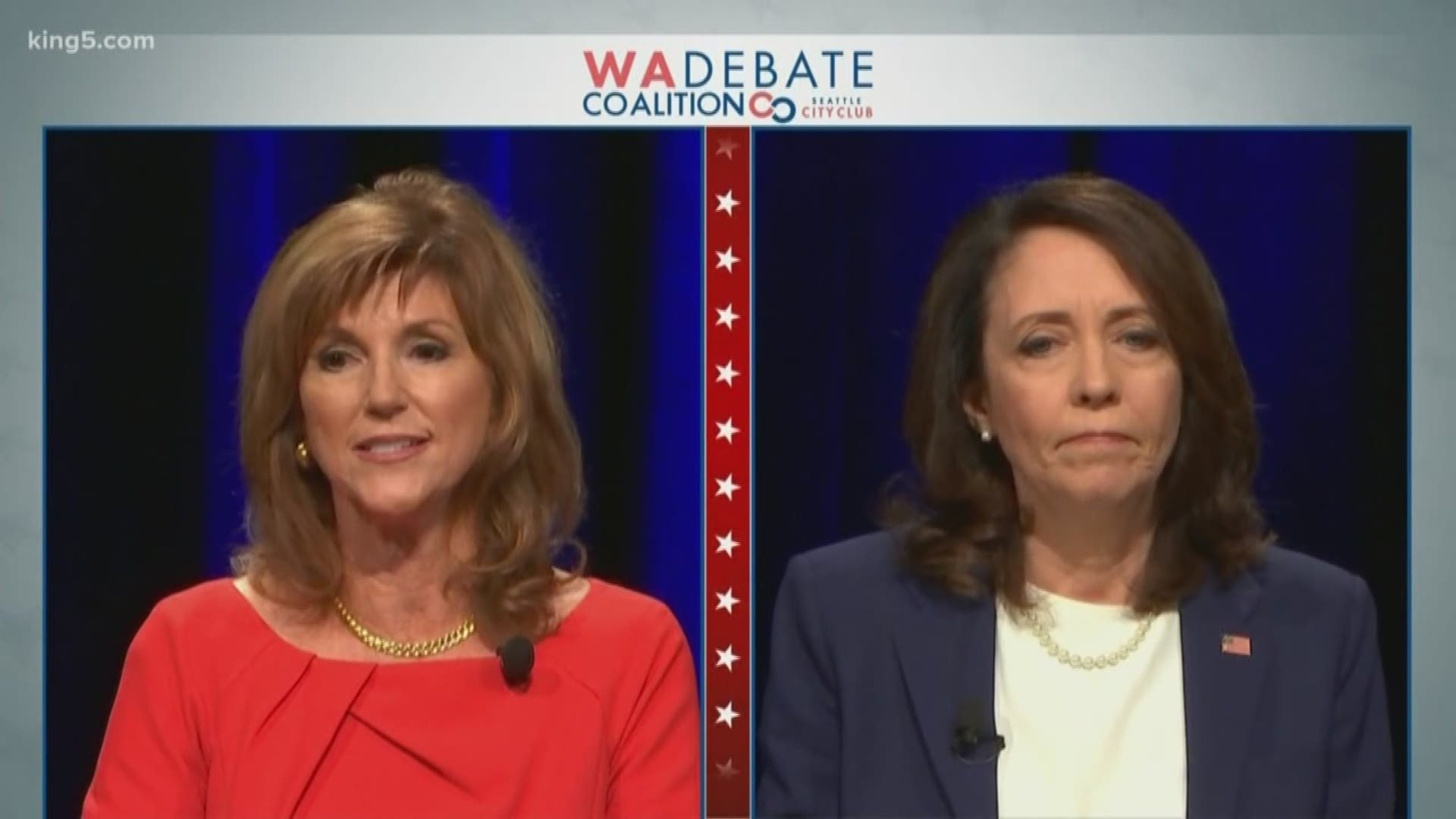 KING 5 and dozens of other media partners are part of the Washington Debate Coalition founded in 2016. The Coalition has hosted previous U.S. Senate debates, a gubernatorial debate, and a mayoral debate, since launching.