Heidi Wills and Dan Strauss are looking to replace Mike O'Brien in Seattle's District 6. But their cordial campaign has taken a turn. 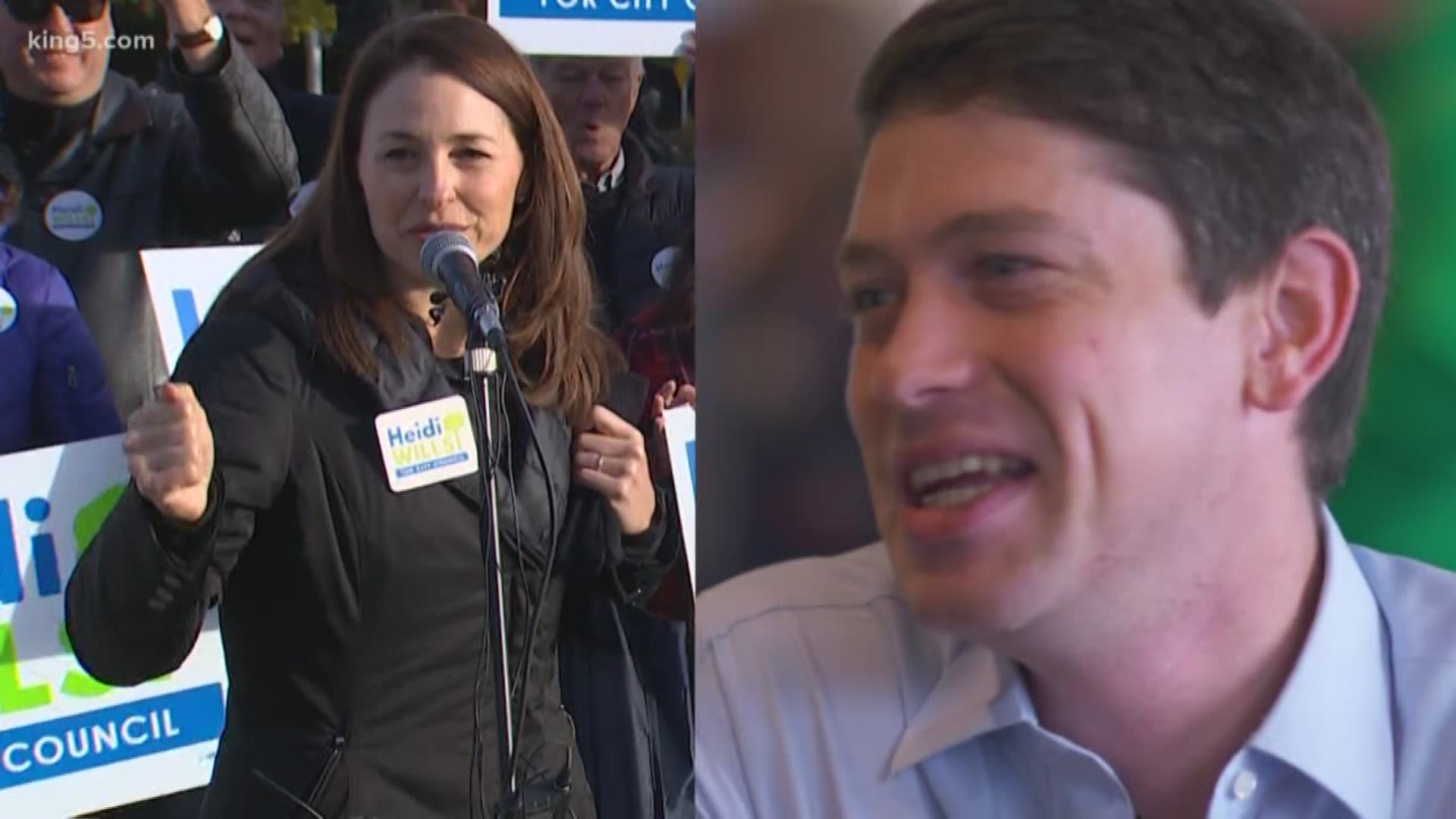 The Seattle City Council race to replace Mike O'Brien has gone from polite to nasty in the span of a few weeks.

The District 6 race between Heidi Wills and Dan Strauss also leads all the open seats in the amount of money spent from independent expenditures, or PACs. It seems the spike in money has happened concurrently with the rise in tensions.

Seattle Police Guild President Kevin Stuckey was also there. Wills said it's clear now: there is a sharp division between she and Strauss on how to handle safety and homeless encampments. She also made it clear at the event how she viewed the outside money.

"I think that really speaks to the fact that people are engaged around these issues and want change. He has some of the same endorsers as council member Sawant," she told the crowd.

Those are sharp words from Wills in these parts, where Sawant, according to a Chamber-backed poll, has a 25% approval rating. Her council ally, O'Brien, decided not to seek re-election.

Yet Strauss has countered, after a cordial round of debates in October, with a series of mailers which paint a different picture. In fact, the flyers have his specific campaign seal of approval, and tout Wills 2003 City Hall 'Strippergate' scandal as a reason not to elect her.

She paid a $1,500 fine, along with two other council members, after accepting donations from an organization looking for a rezone near the Lake City Ricks' strip club.

Strauss had been reluctant to bring it up on the campaign trail until now. The aide to current city council member Sally Bagshaw has gone on the attack, and appears to have also loosened his position on cleaning unauthorized encampments, and using city navigation teams for outreach.

"Heidi is trying to distract voters, but the real issue here is that with nearly $1 million of special interest spending in District 6, special interests are trying to buy a seat on Council for Heidi again. Time and time again, she has proven her vote is for sale to the highest bidder, no matter if it's Strippergate, or giving millions to downtown developers, or receiving the largest corporate expenditure in Seattle's history. I will be accountable to our community because I can't be bought and my vote is not for sale," he wrote in a statement.

But the flyers even caused Seattle Mayor Jenny Durkan to jump into the fray. She said she's not endorsing either candidate, but adds that the insinuation that Wills was involved in illicit activity to be false.

"I was the federal prosecutor who investigated, jailed, and seized the properties. Mentioning the (Rick's owners) Colacurcio's and Heidi Wills in the same sentence isn't right." Durkand added, "(to) imply that there was criminal conduct there, is wrong."

Perhaps it's the strain of the campaign, or as many have pointed out, that Wills has financial backing of nearly 4-to-1 over Strauss. One thing is for sure, it'll be interesting to see what word the candidates use to sum up the race, come Tuesday night.

Get real-time elections results on the new KING 5 app