Health care repeal may be on life support, but protesters take no chances. 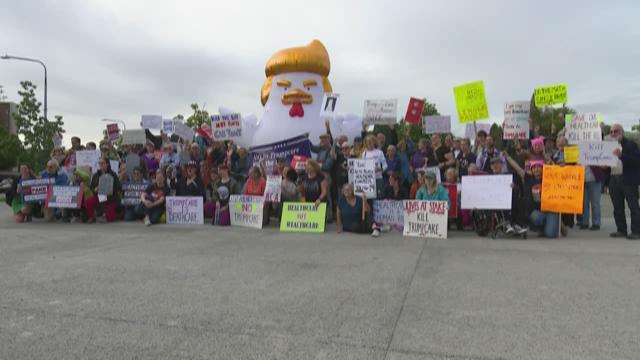 Even though the Graham-Cassidy Bill’s fate is in serious doubt after Senator Susan Collins declared ‘no’ on Monday, community members in Seattle are no taking any chances until there is a vote.

Dozens of protesters showed up to the University of Washington Medical Center campus to ask passersby to ‘Honk for healthcare!’

Brain cancer survivor Amy Provenzano says two brain surgeries, a lengthy stay in the hospital and chemotherapy would have amounted to close to a $1 million if not for the Affordable Care Act.

Protesters had planned a die-in, in which participants simulate being dead, to protest the current attempt to repeal and replace Obamacare.

“I had made a pledge that I was going to refuse medical treatment if the ACA was going to be repealed in July,” Negrin said, explaining she did this to encourage people to write to their lawmakers.

Negrin did not renew her pledge for the repeal efforts’ third act.

“I didn't feel like I needed to do something that extreme this round,” Negrin said.

The die-in didn’t happen either, as the pressure seems to be far less after Senator Susan Collins of Maine publicly declared Monday she would not vote for the bill. This is causing the bill to be on the verge of collapse only a day after Republicans revised the bill to include more money for Maine, Alaska, Kentucky and Arizona.

“My suspicion is, this effort's not going to work because the fact that it's gotten this far. This is just sort of the last nails in the coffin,” Mark A. Smith, a professor of political science at the University of Washington, said.

Smith says the republicans are making it up as they go along, and their latest sweetener -- in the form of billions of dollars for states whose senators oppose the bill – is probably not going to sway them.

“Once you've taken a stand on another version of the bill and then you shift, you become a ‘flip flopper’ – that's generally a bad place to be in politics. And then you're kind of showing, well, I can be bought,” Smith said.

Smith says the controversy over Obamacare will not go away if the current repeal bill is defeated, as the public continues to want better healthcare coverage for less money. He expects another repeal bill to be back on the table sometime next year when the budget comes up once more and Senators have the opportunity to push legislation through with 50 votes instead of 60.