Trump may earn less than 35% of the popular vote, a first in 108 years, an exclusive KING 5 News poll suggests. 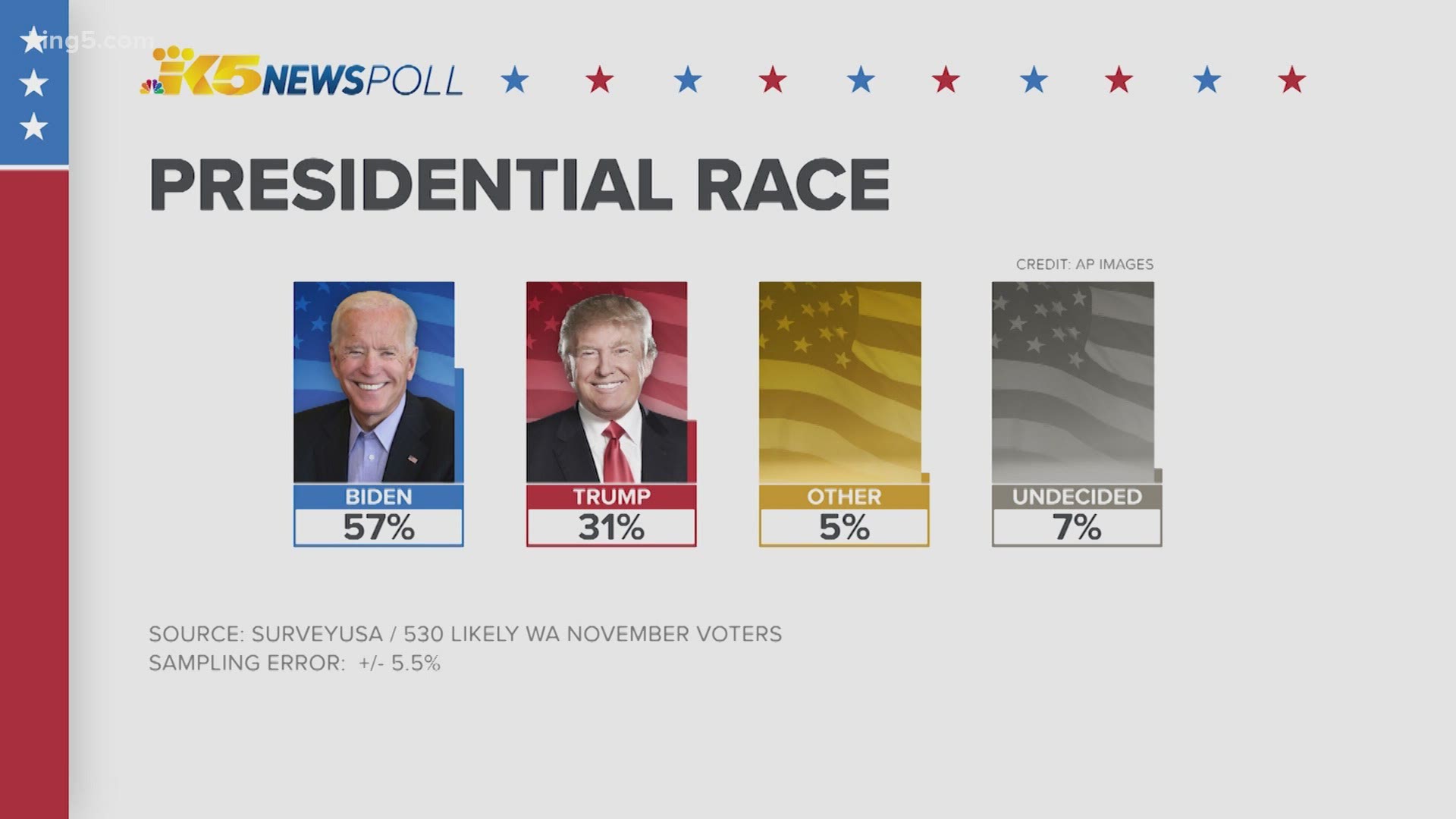 SEATTLE — An exclusive KING 5 News poll suggests President Donald Trump could be the first Republican presidential candidate to earn less than 35% of the popular vote in Washington in 108 years.

President Trump's approval rating was 33%, according to the poll.

KING 5 reached out to political analysts Scott McClellan, who was the press secretary under President George W. Bush, and Ron Sims, who was deputy secretary of Housing and Urban Development under President Barack Obama, as well as former King County Executive.

McClellan said it would be "hard" for Trump to get back to his 2016 level of support in Washington, which were about 15 points higher than his current standing in the poll.

“It means you start from a strong disadvantage because of the top of the ticket, because of the general sentiment of the public toward the Republican Party in the state of Washington at this time," McClellan said. "Now that is not to say that's the way it will be nationally. That's just the way it is in Washington state, a solid blue Democratic state."

Sims said this sentiment could also have an impact on down-ballot Republican races.

"If they have political consultants, they're going to tell them to distance themselves from the president, because those are awful numbers," Sims said. "But it also dries up people who would finance campaigns and make contributions because they're gonna look and say, to make an investment right now on a Republican candidate is a poor investment with little or no rate of return in terms of the person being able to win.”

Washington gubernatorial incumbent Jay Inslee is almost certain to advance to the general election, according to the results of the survey.

Among likely primary voters, Gov. Inslee is looking to secure about 50% of the vote, according to survey results.

The six Republicans who oppose Inslee in the primary account for 26% of the vote. Of those who took the survey, 8% say the would vote for Tim Eyman, 6% for Phil Fortunato, 6% for Joshua Freed, 4% for Loren Culp, 2% for Raul Garcia, and 1% for Anton Sakharov.

Another 23% say they are undecided.

Inslee's approval rating is 61%, according to the poll.

McClellan said the past few gubernatorial elections have been a challenge for Republicans in Washington state.

“It's an uphill battle for any Republican candidate to win statewide. You look at 2012 and the governor's race, you had a strong, credible Republican running against Inslee, at that time, who had broad appeal," McClellan said, referring to former Attorney General Rob McKenna. "And he still came up short. It is only harder to try to run statewide in 2020, given the current climate." 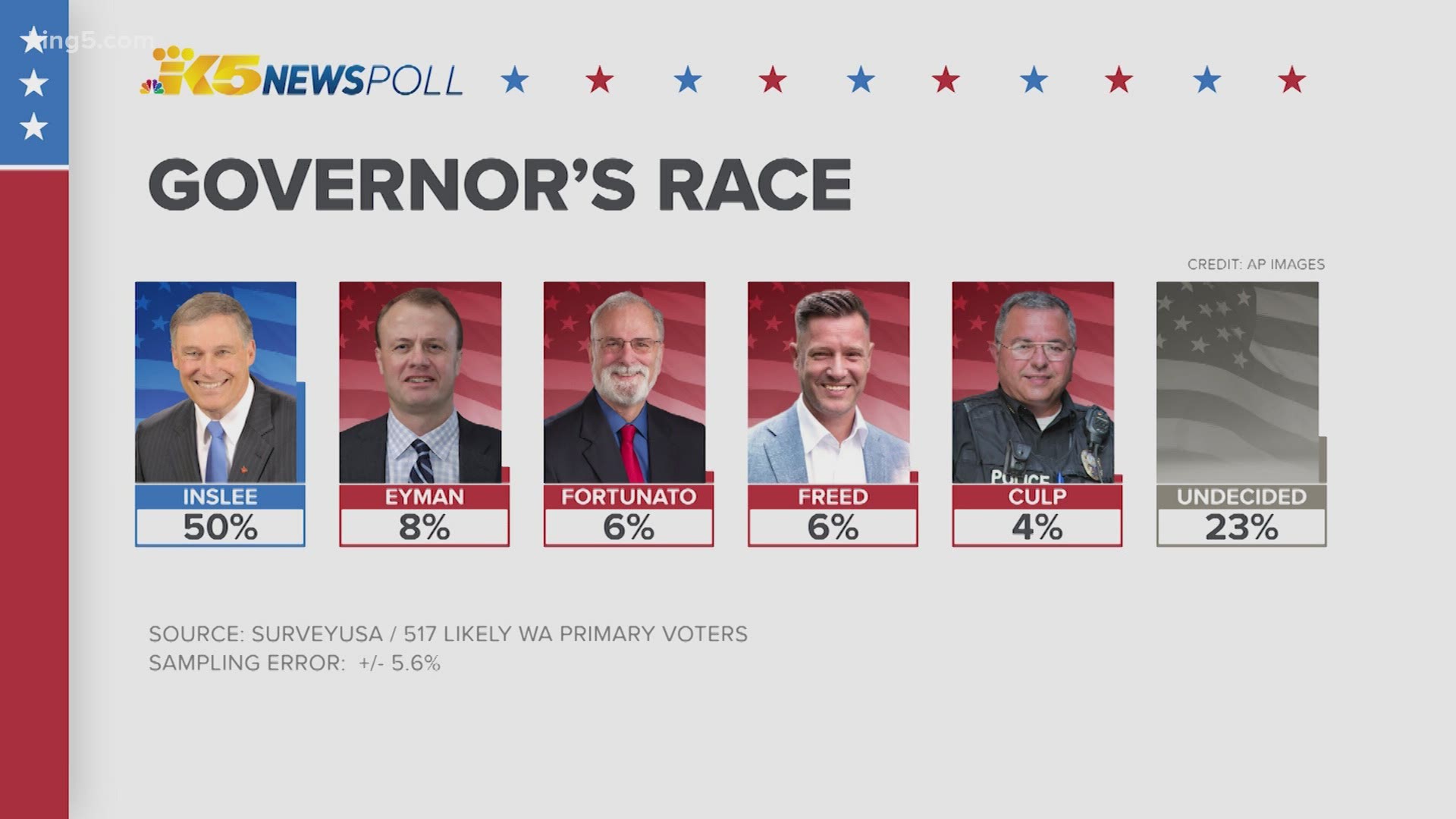 Sims believes that Inslee is in a good position.

“I would not run against a Gov. Inslee, and if somebody came to me and said, I'll pay you a million dollars. You know, I'd say you're wasting a million dollars. I'm not I'm, you know, I just can't take your money and nobody should. So I think that the governor's race is all but decided that this we’re just waiting for the votes.”

However, Washington State Republican Party Chair Caleb Heimlich argued if Inslee garnered 50% of the primary vote, that puts him in a vulnerable position.

"It's no secret that Washington state leans blue, especially at the federal level, but on down-ballot and statewide races and state legislative races, Republicans are very competitive,” Heimlich said.

Heimlich pointed to the 1964 presidential race when Barry Goldwater received "one of the lowest amounts of a Republican presidential candidate in Washington state history," but Republican Dan Evans won the governor's race.

“There's still a lot of campaign left between now in the August primary and the November election. And I still believe Jay Inslee is vulnerable,” Heimlich said.

Attorney General Ferguson will receive around 47% of the vote, according to the results. Matt Larkin and Brett Rogers each would receive 8%, followed by 4% for Mike Vaska.

Another 32% say they are undecided.

The campaign for lieutenant governor is more uncertain, with 50% saying they are undecided. U.S. Rep. Denny Heck leads with 15% approval from likely primary voters who took the survey.

The seat for lieutenant governor is open after Cyrus Habib announced he would not seek re-election.