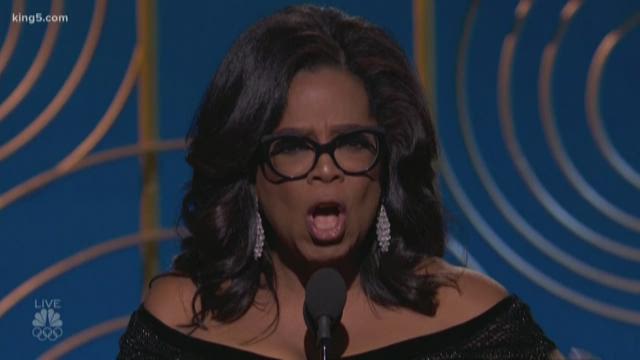 The first day of Washington state's 2018 legislative session started with a new majority in the Senate. Senator Manka Dhingra's win in November gave Democrats a one-seat advantage in the upper chamber and full control of state government.

“Go get 'em,” Governor Jay Inslee told Dhingra while delivering flowers to her desk on the Senate floor Monday.

Dhingra, of Redmond, says she was inspired to run in large part because of President Donald Trump's surprise upset in 2016, and also encouraged by her teen children who led Monday's pledge of allegiance before their mom took the oath of office.

“To me, you have to look at next generation to see where we're at,” said Dhingra.

It's a generation that she says values respect and equality, whether in politics or the workplace.

“I think the #MeToo movement and women coming up and speaking out about the way they have been treated was the next thing bound to happen after the women's march,” said Dhingra. “I think it really has been awakening that we've seen in last few years, and I hope it will continue.”

Oprah Winfrey captured the emotion of the moment with her speech at Sunday night's Golden Globes, proclaiming “a new day is on the horizon.”

Her speech elicited a standing ovation from Hollywood and caused social media to speculate whether she'll run for president in 2020.

While Oprah's longtime partner told the LA Times “it's up to the people,” a source told NBC News she “has no intention of running.”

“I think there's lots of people who might get in race—might be Oprah, might be The Rock (Dwayne Johnson),” said State Senator Dough Ericksen (R-Ferndale). Ericksen, who worked on President Trump's 2016 campaign and said he would be interested in working for his reelection campaign, downplayed the possibility of a Trump-Oprah matchup in a couple of years.

However, the larger issue of MeToo -- a movement that Hollywood is now transitioning into “Time's Up" -- is one that has bipartisan support and attention, even in Olympia.