The proposed tax of $20 per metric ton of carbon emissions would begin in 2019. 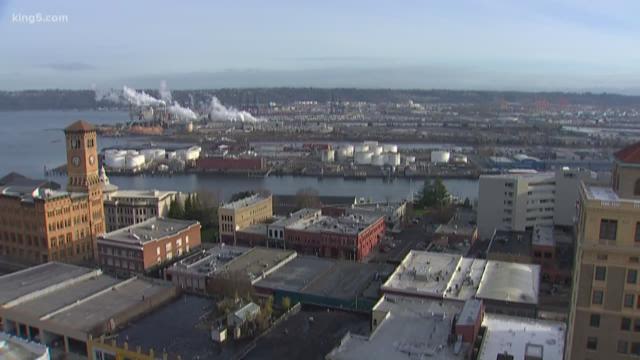 Democratic Gov. Jay Inslee has unveiled details of his latest effort to get legislative approval on a new tax on carbon emissions from fossil fuels.

Under bills introduced in the House and Senate Tuesday, a proposed tax of $20 per metric ton of carbon emissions would start on July 1, 2019 and increase annually by 3.5 percent over inflation.

Half of the money from the tax - which would be paid by power plants and fuel importers but would ultimately affect consumers - would go into efforts to reduce greenhouse gas emissions, such as programs to expand opportunities for renewable energy at both homes and utilities, and research of clean energy technology. An additional 35 percent would go into flood management and storm water infrastructure, and would also be used to reduce risks of wildfires.

Some money would offset taxes to eligible business and help low-income families, according to the proposal. However, exact details and a percentage are unclear.

“So, yes there will be impacts on fuel and energy prices, but we expect these to be modest and fully within the range of what would be expected by normal price fluctuation,” said Lauren McCloy, a senior energy policy advisor in Inslee's office.

Impact is also expected to vary from business to business, but the governor's new bill also includes a number of exemptions and credits, including for aircraft fuels and certain industries.

“We want to protect jobs in this state, and that's why our bill protects them with energy intensive, trade exposed companies,” Governor Inslee told reporters Tuesday afternoon.

Rep. Joe Fitzgibbon (D-Burien), who supports the plan, said the bill would set up a process for the department of commerce to evaluate individual businesses that might be most impacted.

“Generally, businesses we've identified at the top of that list at the past have been steel manufacturers, aluminum, glass, cement, those types of businesses that make a product that there's a price on the global market that is set that are very energy intense to manufacture,” Fitzgibbon.

The Governor, Democratic leaders supporting the bill and a handful of environmental, labor and business leaders met Tuesday afternoon, including Microsoft, Puget Sound Energy and Avista.

However, Republican lawmakers call the bill short on policy, heavy on taxes.

"If you run the numbers on it, it's a 19 or 20 cent per gallon gas tax. You're looking at your heating and utility bills go up, you're looking at food prices going up, manufacturing prices go up," said House Minority Leader Dan Kristiansen who argues middle and low income residents will be hit particularly hard.

Senator Doug Ericksen (R-Ferndale), one of the loudest critics on a carbon tax, called the Governor's proposal a "death tax" on Washington.

The Association of Washington Business has also expressed concern about the impact to the manufacturing sector hard.

“Those additional costs would also further erode the state's global competitiveness, possibly moving jobs and industries to locations outside of Washington, or even the U.S, without a carbon tax and the stringent environmental protections our state has in place," Association of Washington Business President Kris Johnson said in a statement.

The Governor counters that his bill will gain more support as it works through the legislative process; a hearing is scheduled for next week.

“This is not the first time it's been done. The world has proven it works. We ought to join rest of world with something that works," Inslee said.

The proposal comes at the start of a 60-day, short legislative session where Democrats hold slim majorities in both the House and Senate. The Senate's new majority leader Sharon Nelson acknowledges an uphill battle, saying "we have a lot of work to do in a limited time, but we must start the conversation now."

I applaud the leadership demonstrated today by my friend @GovInslee & Washington state with the announcement of a plan to reduce carbon emissions & embrace the Sustainability Revolution through carbon pricing. #WeGotThis