Gov. Inslee was one of two Democrats to address President Trump publicly. 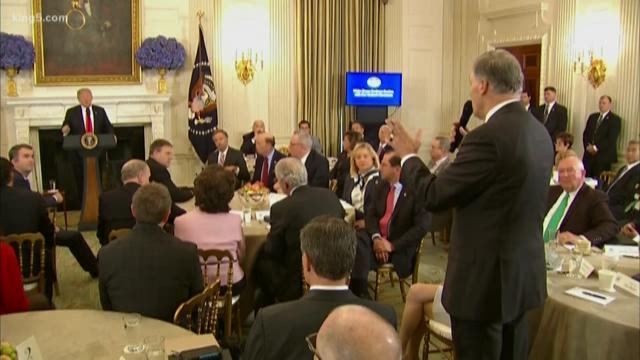 The exchange occurred during a meeting with the nation’s governors at the White House.

Gov. Inslee was one of two Democrats to address President Trump publicly.

President Trump defended the proposal, saying he believes arming a small portion of teachers could serve as a deterrent. 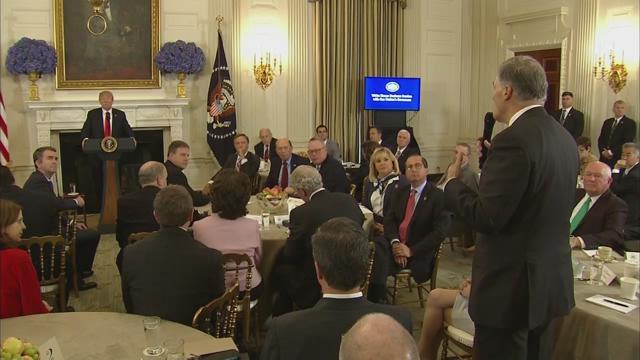 You can read the transcription below:

“I know that you have suggested arming our teachers,” said Governor Inslee.

“No, no no,” interrupted President Trump. “Arming a small portion that are very gun adept, that truly know how to handle it. I do feel Governor, it’s very important that gun free zones… you have a gun free zone, it’s like an invitation for very sick people to go there. I do think that there has to be some form of major retaliation if they’re able to enter a school.”

“I have listened to the biology teachers, and they don’t want to do that at any percentage,” Governor Inslee continued. “I’ve listened to the first-grade teachers that don’t want to be pistol-packing first-grade teachers. I’ve listened to law enforcement who have said they don’t want to have to train teachers as law enforcement agencies which takes about six months. Now, I just think this is a circumstance where we need to listen, that educators should educate and they should not be foisted upon this responsibility of packing heat in first-grade classes. I understand you have suggested this, and we suggest things, and sometimes then we listen to people about it, and maybe they don’t look so good a little later. I just suggest we need a little less tweeting here and a little more listening and let’s just take that off the table and move forward.”

Inslee is a former Congressman, now being talked about as a 2020 Dem candidate for President

A spokesperson for Inslee gave a one-sentence statement in response to that speculation.

“Governor Inslee is focused on a job he loves — being governor of the state of Washington," Jamal Raad wrote in an email.

The measure allows families or law enforcement to ask a judge to temporarily block a person’s access to firearms if there’s evidence the individual is threatening harm to themselves or others.

“It’s been in operation for a year; it’s been extremely successful. I would commend it to you,” Governor Inslee told the President.

The White House meeting with governors comes 12 days after 17 people were killed in the shooting massacre at Marjory Stoneman Douglas High School in Parkland, Florida.

The Trump administration has talked about different proposals from enhancing the gun background check system, to raising the age limit to buy assault weapons, to the controversial idea of arming trained teachers and staff.

“WEA believes that educators should not be armed and that guns and other weapons should not be allowed in schools. Further Washington state law prohibits guns and weapons on school campuses,” President Kim Mead said.

"Nobody is forcing the teachers; nobody is forcing anybody to do this," counters state Senator Phil Fortunato, R-Auburn. "I have teachers calling me and they’re saying I want this to pass, because currently, I’m packing now, and I want to be legal."

Senator Fortunato has proposed a bill that would establish a training program if teachers want to be armed and if school districts opt into the program. It's one of a few gun and school safety measures being floated in Olympia with less than two weeks until the current legislative session ends.

"We need to come together and do something for school safety in Washington," said Sen. Frock, D-Seattle whose bill on enhanced background checks for assault weapons stalled earlier this session.

"I would say the issue was dead, unfortunately, but for what happened at Parkland, and I think that has renewed the conversation around school safety and what we can do to make Washington safer," Frockt continued.

The bill would also increase the age of purchase to 21 for certain semiautomatic rifles or shotguns with tactical features, as well as require a state background check along with the federal one, something that's already required for handgun purchases.

"Republicans and Democrats across the nation, at every level of government, are advancing legislation to raise the age to purchase semi-automatic rifles from 18 years of age to 21 years of age," said Exec. Director Renee Hopkins. "Washington State has the chance to become the first state in the nation to pass such legislation."

It's unknown at this point whether the proposal, as written, has the necessary votes to advance through both the state senate and house by March 8, when the session ends.