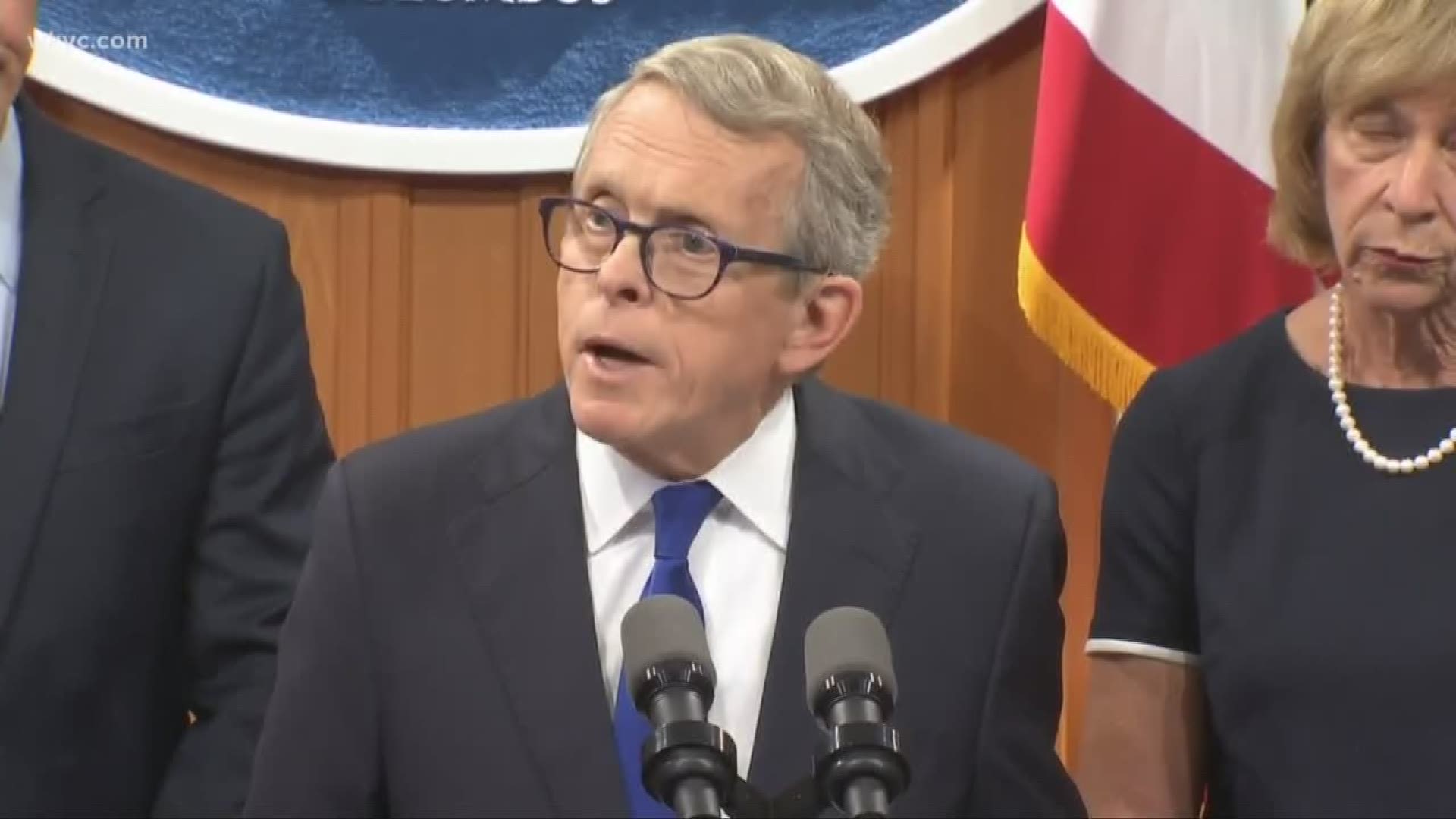 COLUMBUS, Ohio — After facing chants of "do something" while addressing a vigil for the Dayton mass shooting earlier this week, Ohio Gov. Mike DeWine unveiled a plan to reduce gun violence in the state. 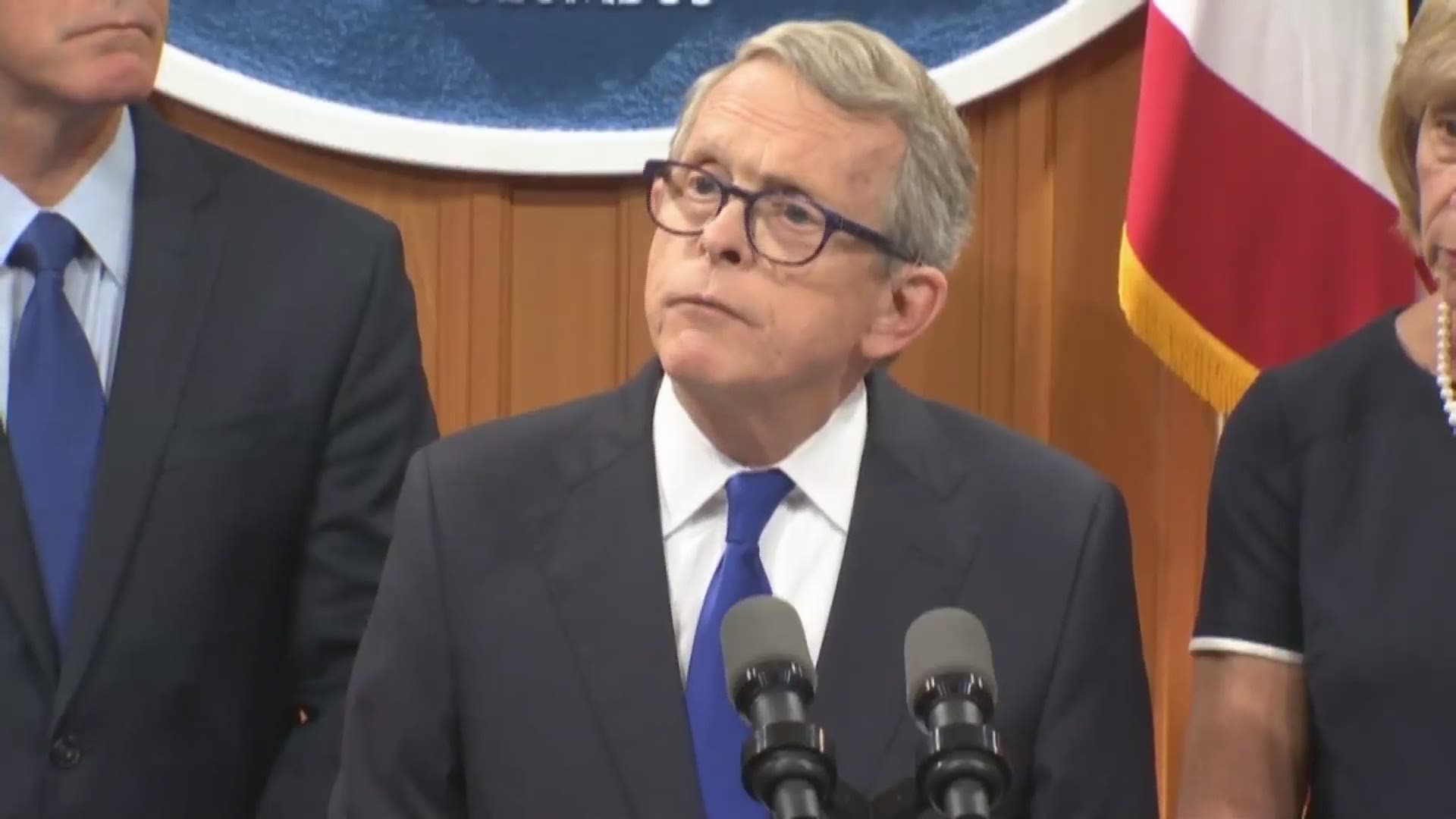 He announced details of his multi-step proposal from the Ohio Statehouse on Tuesday morning. The plan includes requiring background checks on most gun sales and a so-called "red-flag" law, which would allow police or family members to petition a court to remove guns from people they believe could harm themselves or others.

Dean Rieck, Executive Director of the Buckeye Firearms Association, said he is waiting to review the specific language of DeWine’s proposed “red-flag” legislation before reacting.

Rieck said his organization was among the gun-rights groups DeWine’s office consulted about the proposed bill.

Rieck said his organization opposes other “red-flag” laws because he believes they make it too easy for the government to seize guns from citizens without due process.

“We understand what people are trying to get at,” he said. “But such laws are avenues for terrible abuse.”

DeWine never described his proposal as a “red-flag” law. Instead, he called it a "safety precaution orders." He stressed it would allow police to remove the person, not the gun.

About background checks, DeWine said, "I am asking the General Assembly to pass a law that requires background checks for all firearm sales in the state of Ohio with the exception for gifts between family members and certain other limited uses."

Rieck and his organization opposes expanding background checks on all gun sales. Rieck didn’t explicitly criticize DeWine’s proposal but said background checks will not prevent mass shootings like the one in Dayton.

DeWine offered lengthy descriptions of his action plan, which we have detailed in full below... 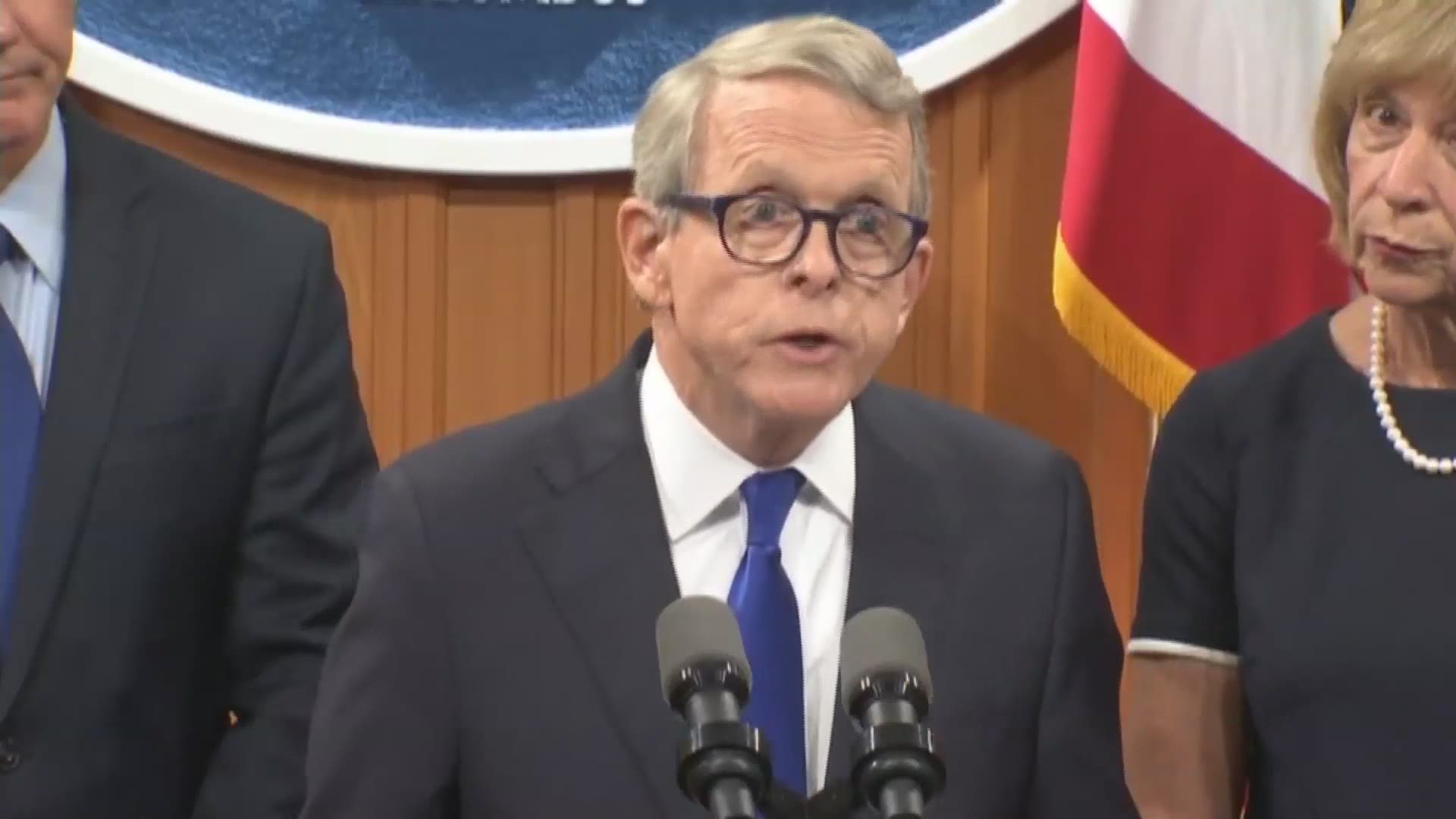 These orders, which would be granted upon clear and convincing evidence would allow the removal of firearms from potentially dangerous individuals and get them the mental health treatment that they need. Get them whatever help that they need.

Individuals could be subject to a safety protection order if they present an imminent risk of injury to themselves, suicide for example. Or they present that risk to another person because of mental health issues because of drug dependency, chronic alcoholism or other serious conditions. These concerns must – and our Constitution demands it – be balanced against the individual’s right to keep and bear arms and their due process rights. My proposal will allow the state of Ohio to file for temporary orders.

A hearing from my proposal, this ultimately will be up to the General Assembly, will be held within three days of the filing – or sooner. The individual would have all the traditional due process rights. … If a temporary order is granted, it would require the person to surrender all firearms to law enforcement. If granted, a second hearing would be held within 14 days to determine if an extended safety protection order should be granted. In this hearing, all the same traditional due process rights would apply. If the court would then find by clear and convincing evidence that the person is a danger to themselves or to others, the extended order will be issued.

In lieu of law enforcement keeping firearms, an individual could have them sold on their behalf to a federally licensed firearm dealer. Extended orders would last for a period of six months, and could be extended with another petition and another hearing. An individual could apply to the court anytime after three months for return of his firearms only if the person could prove by clear and convincing evidence that they were no longer a danger to themselves or others. 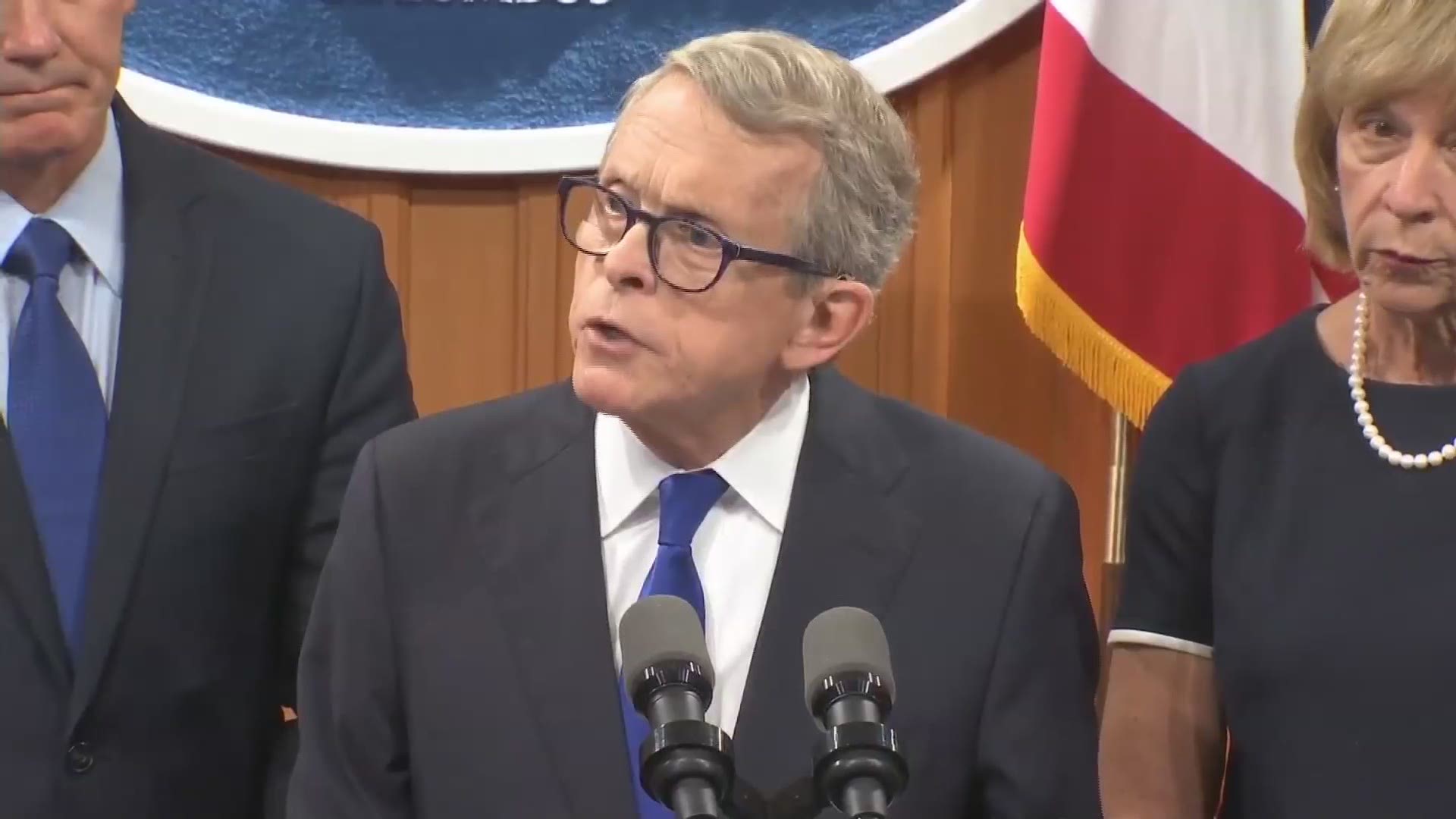 We must have increased access for the citizens of the state of Ohio to our state psychiatric hospitals. We have a problem in this state. We have a problem with people who are not violent, who have been sent there by a court who could be sent someplace else. These individuals are occupying space that we urgently need today. I’m calling on the General Assembly to take action in this area.

Inpatient psychiatric care is limited in Ohio, making it difficult for individuals and families to access the level of care when it is needed. Over the past several years, Ohio’s state psychiatric hospital capacity has become predominantly used by patients who are court ordered to the hospital for restoration to competency to stand trial. This week, for example, 79 percent of the adults in our state psychiatric hospitals are court ordered there. Many of these patients are non-violent offenders. Many are misdemeanors. They are there simply in the hospital pursuant to court order to learn how the court process works.

Surely, together we can find another place for these individuals to obtain that help so they can proceed with trial. This education certainly can be done outside of these hospitals, freeing up critical beds for people who in fact do need hospitalization. The people I’m talking about coming out of the hospital are people who don’t need inpatient psychiatric care, but there are other people in Ohio who clearly do. To accomplish this, the General Assembly will need to pass changes to the revised code to create community-based misdemeanor competency restoration process. 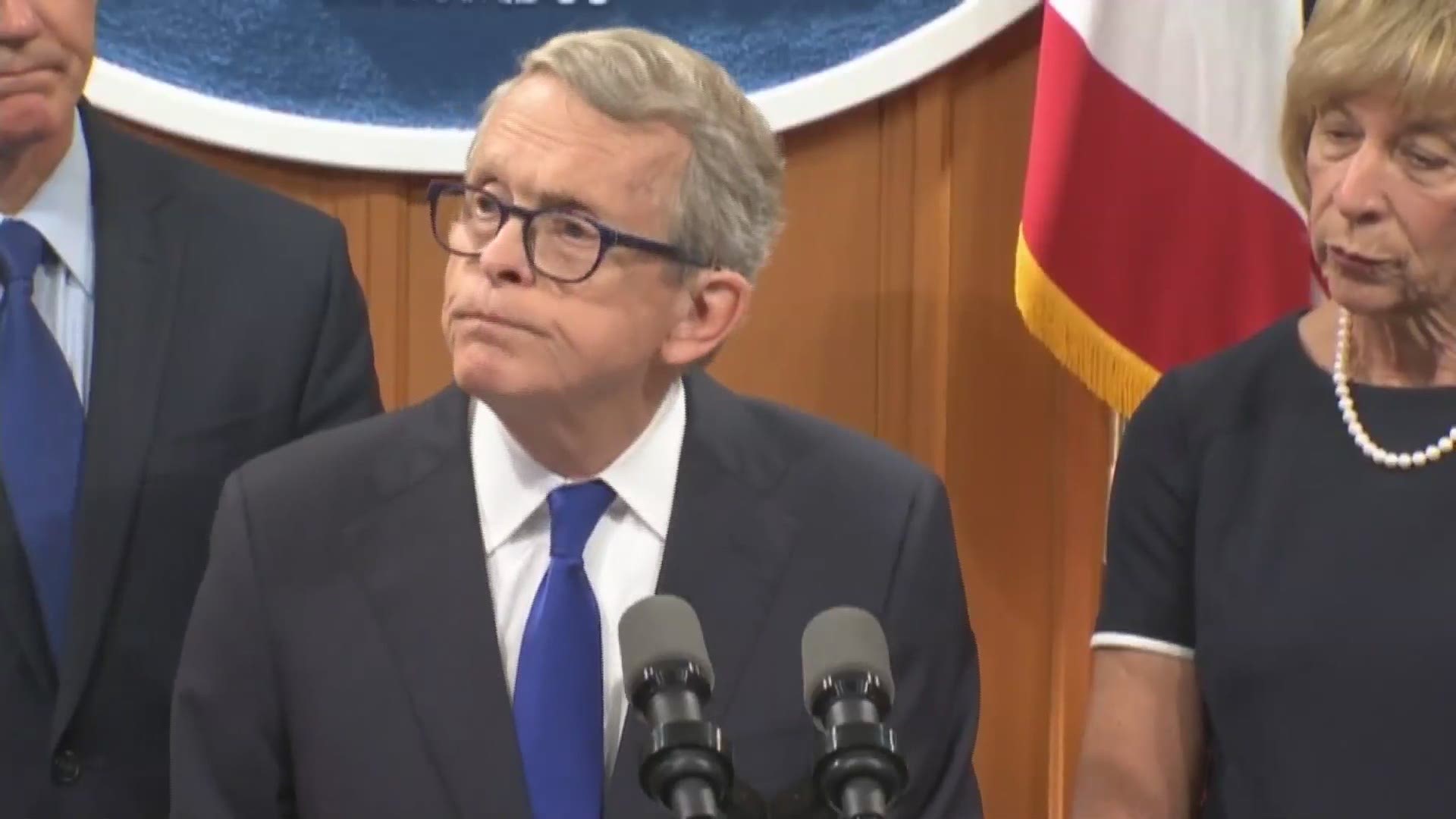 We have a serious mental health crisis among many of our children in the state of Ohio today. It is growing worse. So many of our children have been negatively impacted by trauma. Trauma can take many forms. It can be living with a different parent. It can be seeing violence on the streets, seeing violence in the home. It can be from all the problems that come from horrible poverty. The result is the suicide rate among our young people today breaks your heart. It just breaks your heart.

All the facts of the Dayton tragedy are not yet known, and they will be coming out in the days and weeks ahead. It is clear that the assailant, while in high school, clearly exhibited anti-social behaviors that should have alerted anyone who knew about them that there was a problem -- a serious problem -- with this high school student.

I’m told by the specialists that half of mental health problems start by the age of 14, and 75 percent are identified by age 24. Providing early intervention helps young people recover more quickly and have better outcomes with their education, it helps them build positive relationships with family and friends, and it helps them have healthier lives throughout adulthood. ... Under this budget we are investing $675 million for what we are calling "wraparound services." These clearly can be used, and it’s our intent for much of them to be used for mental health services for children. …

By providing funds to every school district, these schools can design tailored programs working with local mental health providers or other social service agencies to help these kids earlier in life. The earlier that we can intervene in children’s lives and make a positive difference, clearly the better it is. 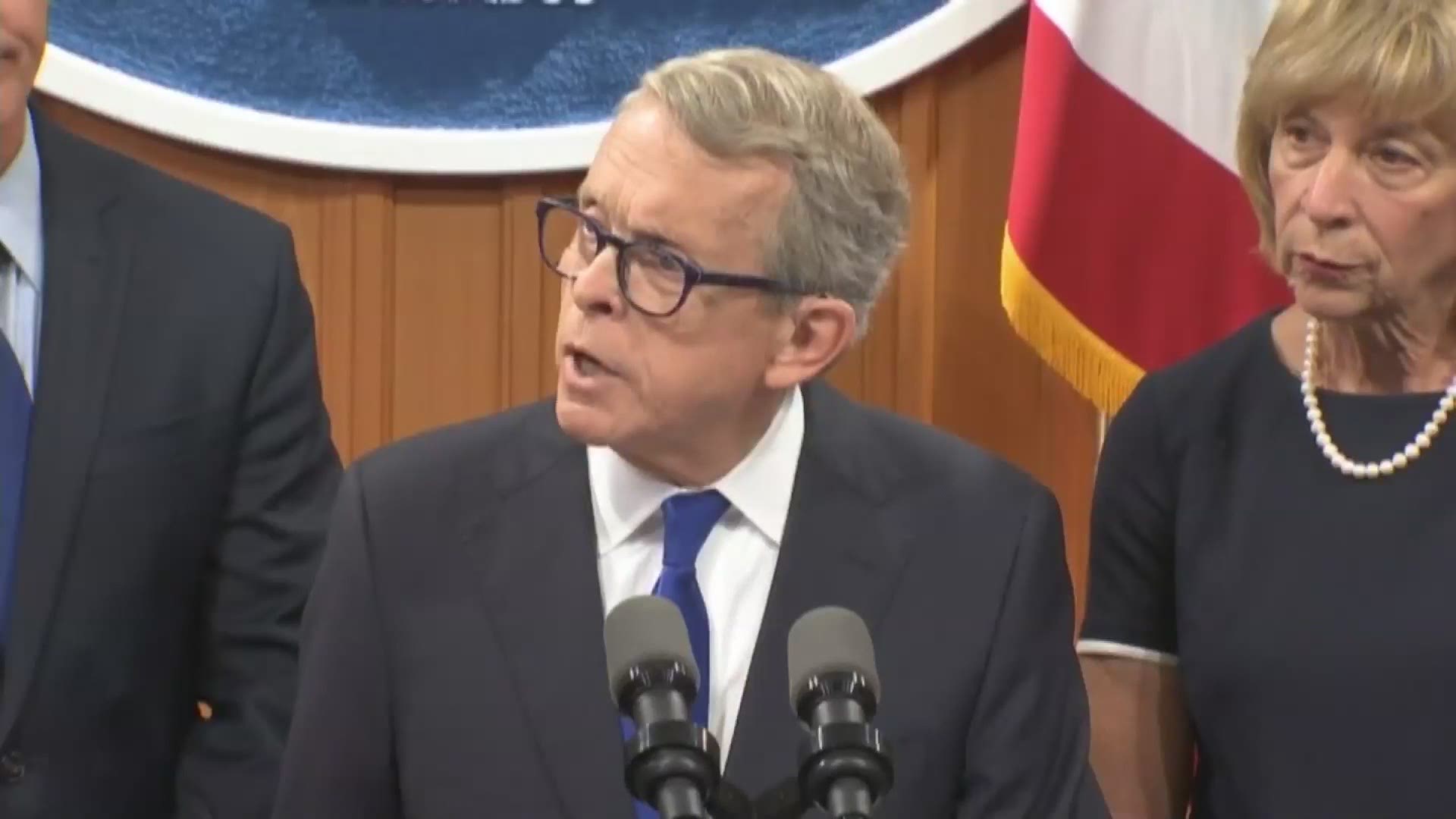 We’re also increasing access under this budget to behavior help professionals in our schools with $15 million in Medicaid funding to provide mental health services to students so that no matter where a child lives in the state of Ohio – no matter how remote it is – they have access to high-quality mental health care. This coupled with the “wraparound services will make a huge, huge difference. 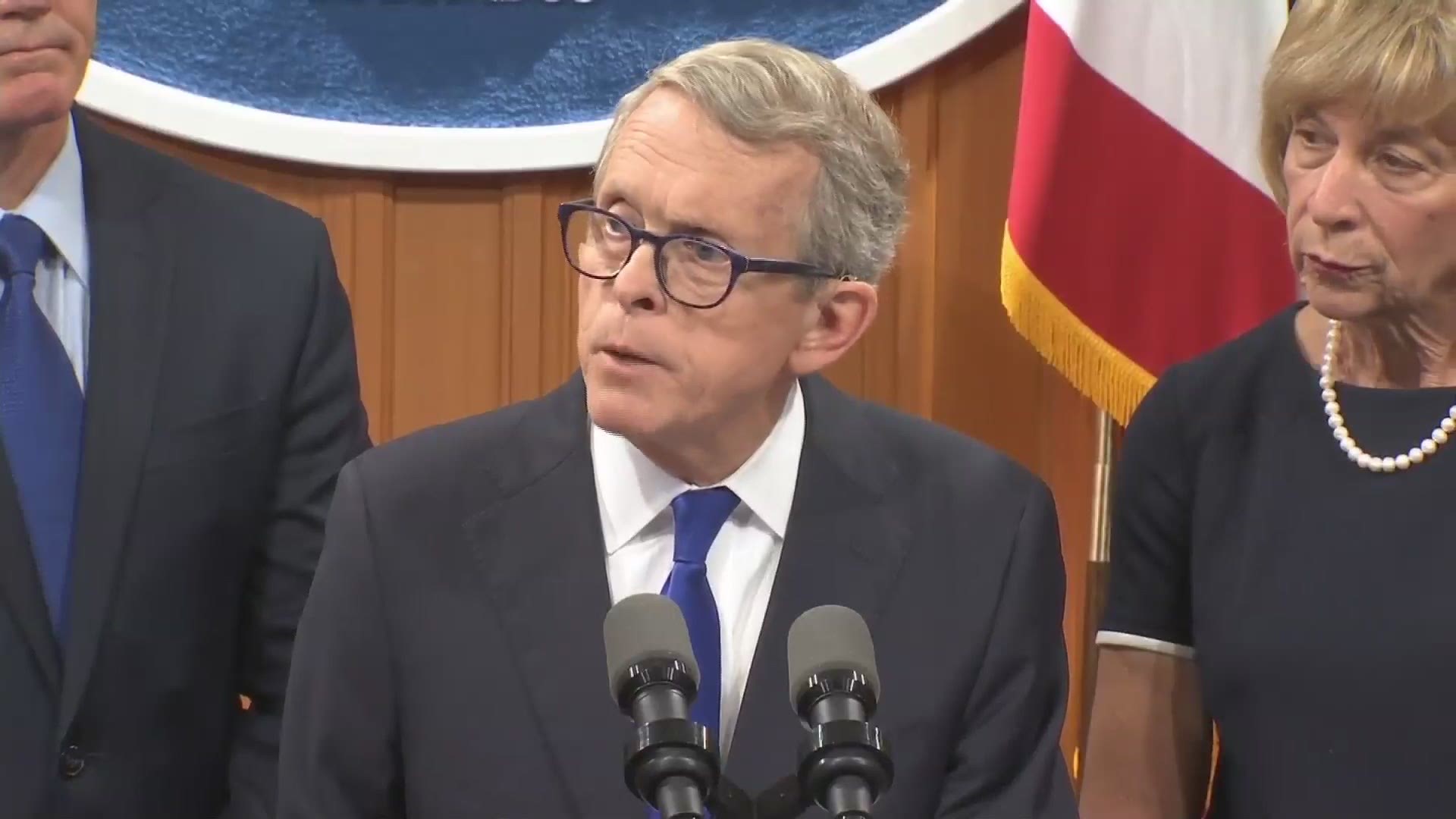 I am asking the General Assembly to pass a law that requires background checks for all firearm sales in the state of Ohio with the exception for gifts between family members and certain other limited uses.

An unbelievably high number of Ohio’s citizens are being killed as a result of chronic gun violence in the streets and neighborhoods of our cities. While we mourn those who were killed in Dayton, we should not forget the other Ohio citizens -- our citizens, our brothers and sisters -- who are innocent victims of random violence and not-so-random violence. We cannot forget those individuals who are dying every day in our cities and across our state. We have to deal with those individuals who are inflicting that violence.

Law enforcement officers have told me for years that the majority of violence in the community is being perpetuated by a relatively small number of individuals. … We must target those who commit the violent crime. We must go after them, and we must take them out of our communities. Far too often, criminals who have absolutely no right under Ohio law to possess a gun, are using guns nonetheless. That’s who we have to go after. The criminals. This must stop, so I’m asking the General Assembly to increase penalties on violent felons who continue to illegal possess or use guns.

We must increase penalties for violent felons and other people who are found with a gun that they do not have the legal right to possess. The crime of having weapons while under a disability, which is what it's called, is currently a third-degree felony punishable by a maximum of three years in prison. I believe that this is a crime that for a first offense should be second-degree felony punishable by two to eight years in prison, and for a subsequent offense should be a first-degree felony, which is three to 11 years.

We must increase penalties for those who buy guns illegally for other people, a practice known as straw purchasing. Straw purchasing is illegal under both Ohio and federal law today, however, Ohio law must be toughened and I intend to do that. All too often, firearms obtained through these straw purchasers are used in serious violent offenses. I am asking the General Assembly to increase the penalties for those who purchase a gun illegally for another person. ... We must increase the penalty for a straw purchaser to at least a second-degree felony punishable by two to eight years in prison. ... When a person possesses a firearm they know was fraudulently obtained, that person should be punished in the same manner as the person that bought the firearm.

We should increase penalties for people who illegally furnish firearms to minors. ... We find too many of our kids are carrying guns on the streets, often with tragic consequences. So adults who illegally furnish firearms to minors must be held accountable. Today, improperly furnishing a firearm to a minor is only a fifth-degree felony and up to 12 months in prison. I'm asking the General Assembly to make the crime at least a third-degree felony punishable by up to three years in prison. 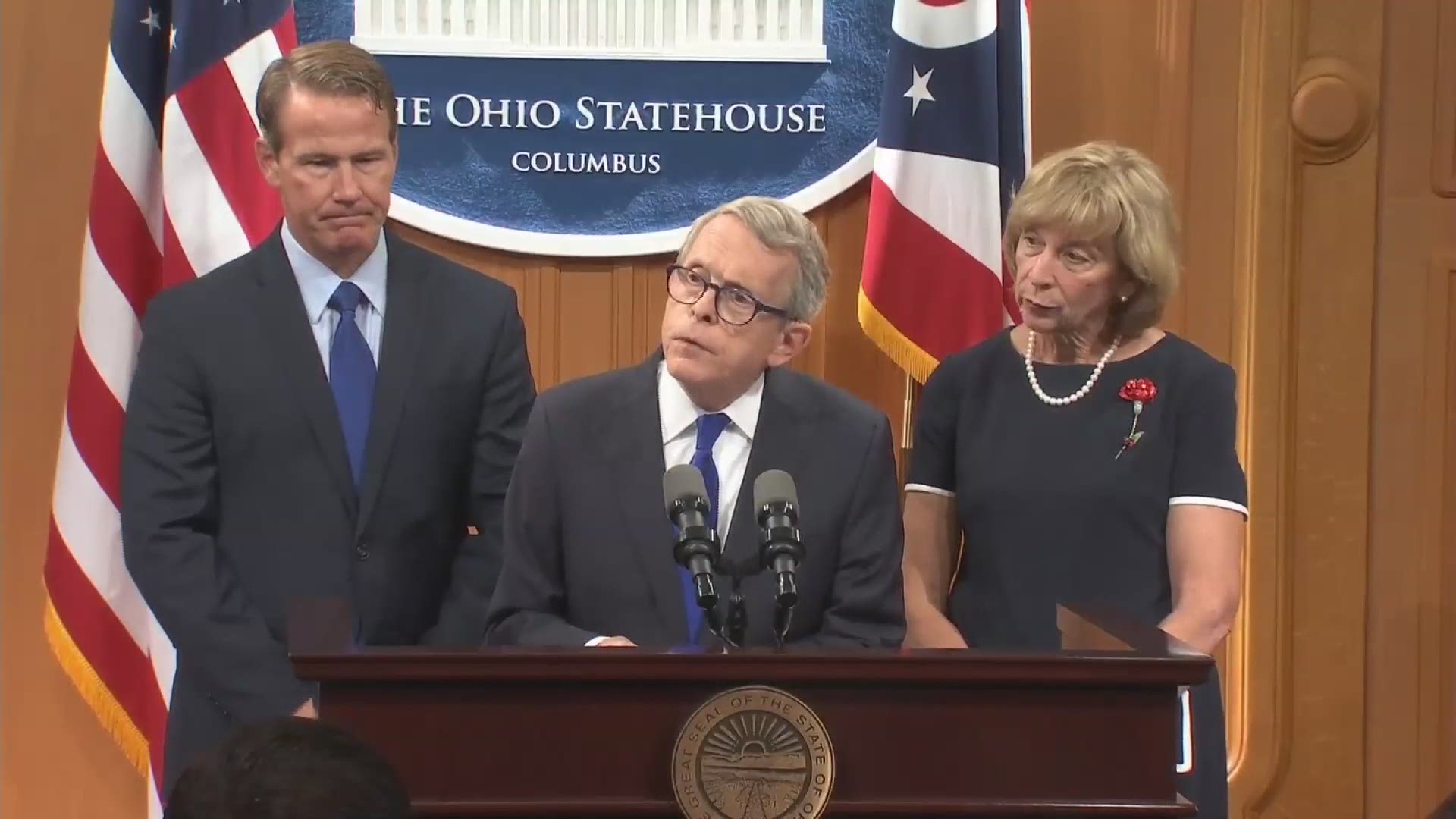 We are expanding our school safety tip line where kids and adults can call or text anonymously with tips about potential school violence. I'm calling on Ohioans today to utilize that tip line. The number is 844-723-3764.

We're asking for people to step up. When you see something, when you hear something, do something. We want to make sure people understand they have the ability to make that call. They can certainly always call their local police, they can call their local sheriff. Call somebody.

MORE | Ohio Rep. Tim Ryan: 'Mitch McConnell needs to get off his ass and do something'