Gov. Jay Inslee and Republic Police Chief Loren Culp will face off in the November general election for governor. 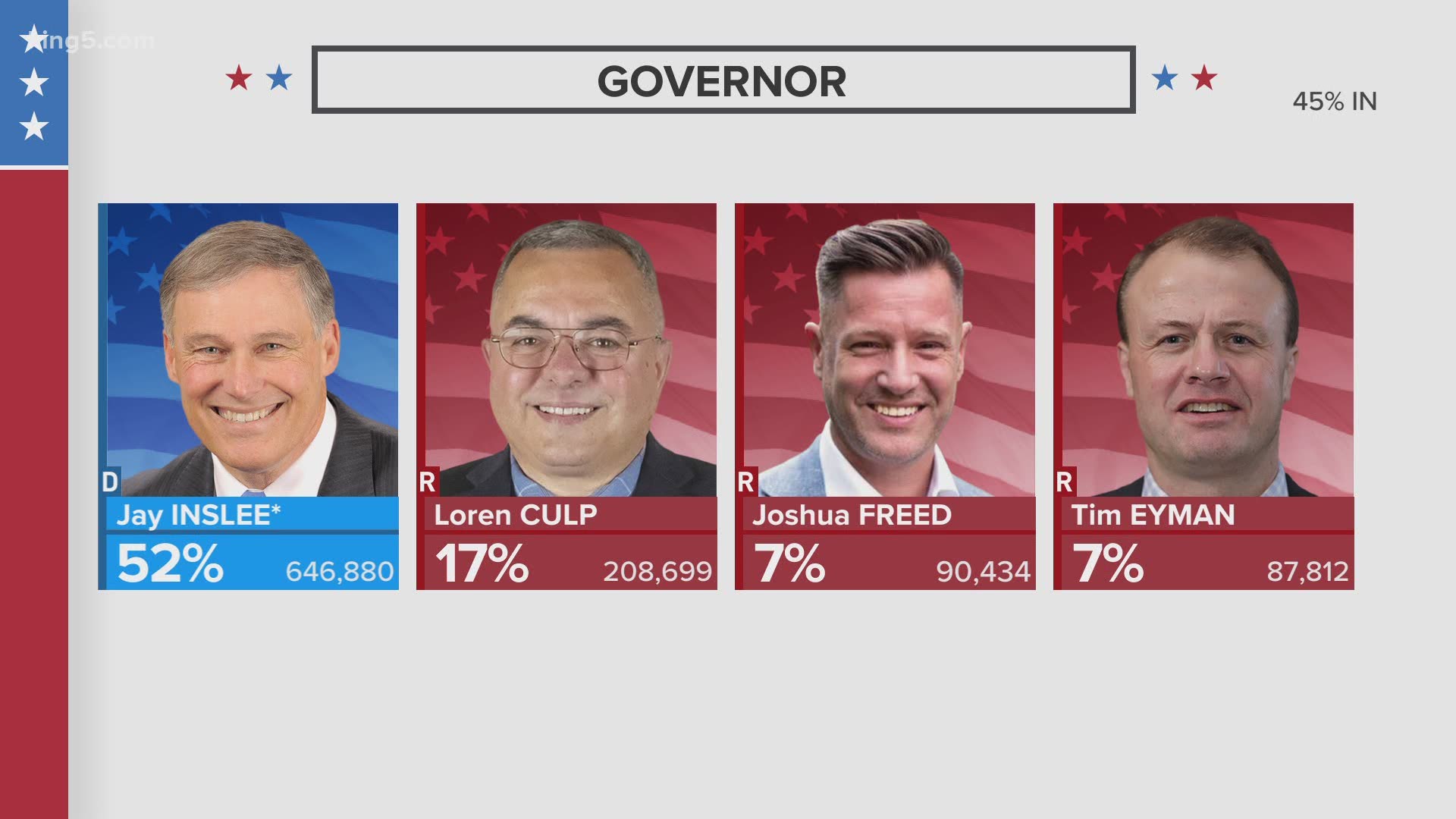 Inslee had 52% of the statewide vote as of Wednesday afternoon, with Culp at 16% of the vote.

Republican Joshua Freed was in third place with 8% of the vote, and Tim Eyman was in fourth with about 7%.

In Washington, the two candidates with the most votes will advance to the general election, regardless of party.

Inslee released a statement Tuesday after early results came in.

"It’s an honor to receive the support of Washington voters during these extraordinarily challenging times. Only by coming together as a state can we defeat this virus, reopen our economy, and build upon the progress we have made these past 8 years,” he said.

He touted the state's "bold, progressive policies" passed during his term.

"At such a pivotal moment, Washington state needs the opposite of Trump-style chaos," he said. "We need strong, steady leadership united around our common goals and values. I thank you for your support and look forward to hearing from all Washington voters and continuing to serve the people of our state.”

Culp held a rally in Plain, Wash. on Election Night. The campaign reported that about 1,500 people from all over the state attended.

A total of 36 gubernatorial candidates appeared on the ballot for the Washington state primary election being held Aug. 4.

Of those, incumbent Inslee is running for his third term as Washington state's governor.

Inslee, who began serving in office in 2012 and was voted in for a second term beginning in 2017, appears to be in a strong position to advance to the general election. A poll of likely primary voters recently found Inslee was looking to secure about 50% of the vote, with a 61% approval rating.

Political analysts Scott McClellan previously noted the past few gubernatorial elections have been a particular challenge for Republicans.

“It's an uphill battle for any Republican candidate to win statewide. You look at 2012 and the governor's race, you had a strong, credible Republican running against Inslee, at that time, who had broad appeal," McClellan said, referring to former Attorney General Rob McKenna. "And [McKenna] still came up short. It is only harder to try to run statewide in 2020, given the current climate." 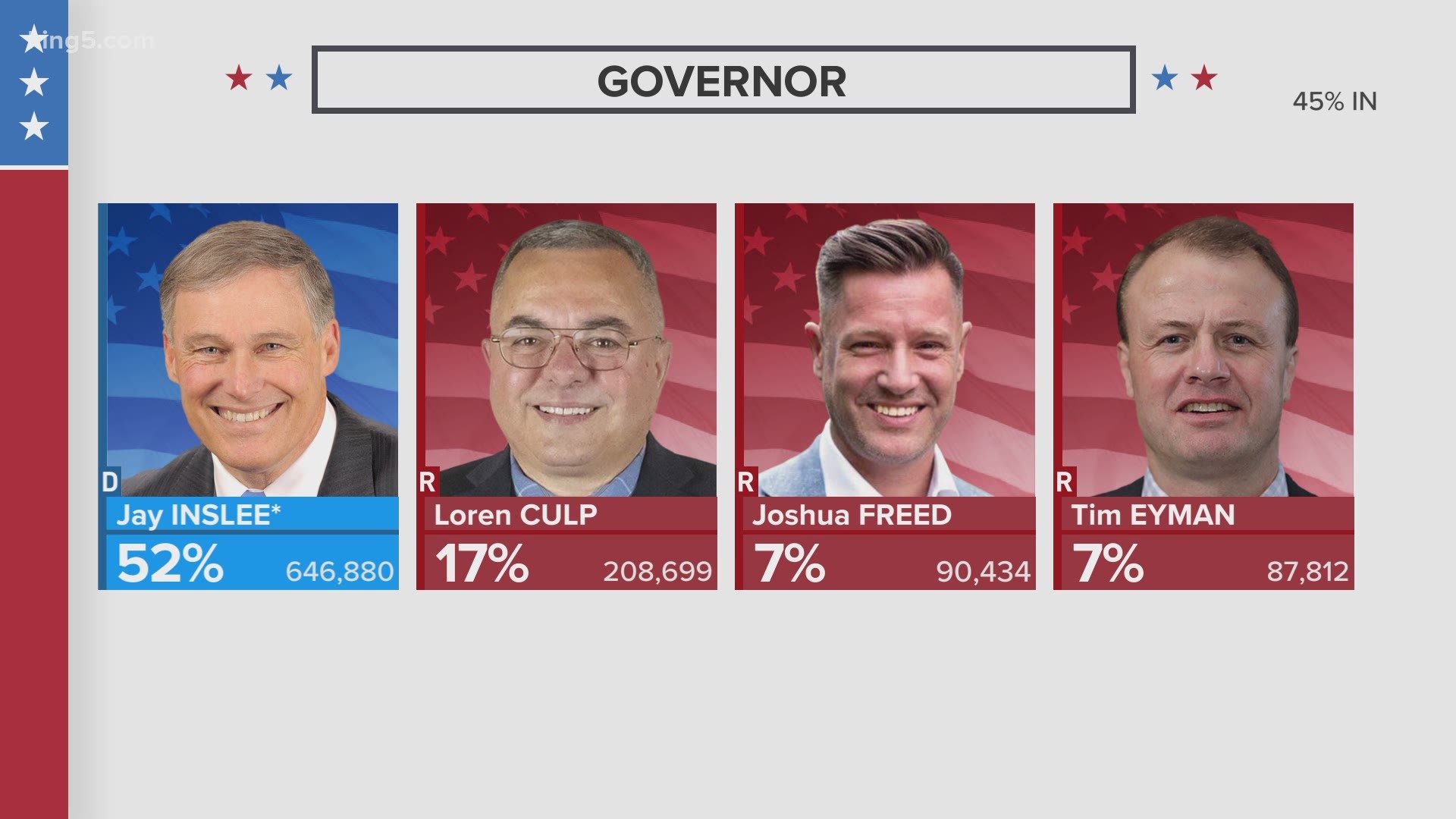 However, there are those who see Inslee as vulnerable.

Earlier in July, Washington Republican party chair Caleb Heimlich pointed to Inslee's "abject failures when it comes to managing the unemployment insurance department where we sent $650 million to Nigerian scammers and for weeks (thousands) of Washingtonians couldn't get the benefits that they'd paid into." In May, as unemployment remained high, the Employment Security Department paused payments to combat fraudulent filings that resulted in the initial loss of $650 million, though much was recovered.

Additionally, Heimlich believes Inslee should have followed the will of the voters on Initiative 976, which was last year's $30 car-tab ballot measure, and that Inslee should have done something about the protest zone in Capitol Hill in Seattle.

It is, then, anyone's race to lock up a spot to challenge him in the primary.

While I-976 sponsor and political provocateur Eyman has garnered attention, former Bothell Mayor Freed has raised the most money.

These are the gubernatorial candidates in the primary: