Gov. Jay Inslee and Republican challenger Loren Culp faced off in a televised debate that covered topics from COVID to climate change to CHOP. 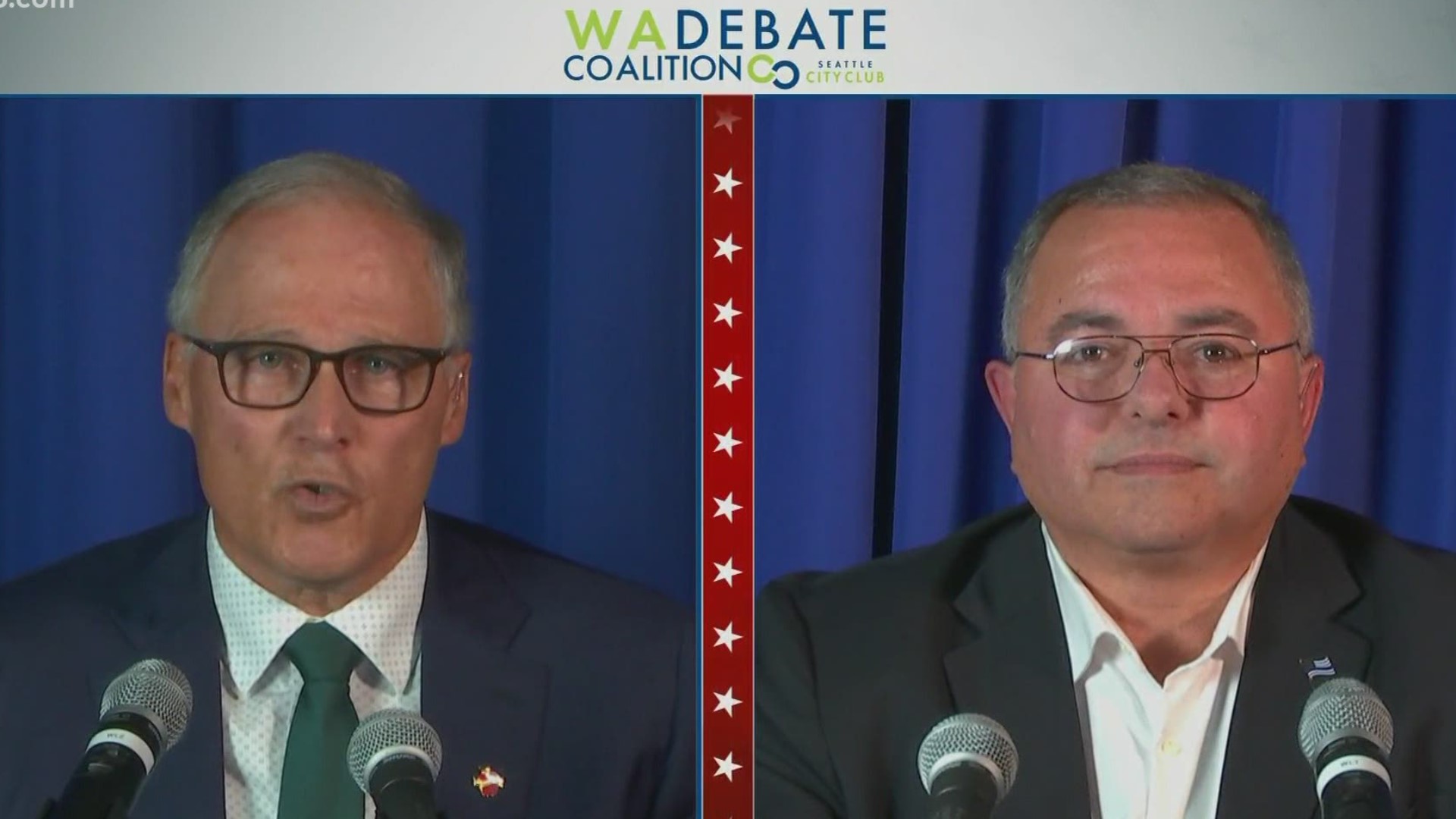 It was the only televised debate between Washington Governor Jay Inslee and challenger Loren Culp.

Inslee, a Democrat, is seeking his third term as governor of Washington state. He is being challenged by Culp, a Republican, who is the chief of police in Republic.

KING 5’s Chris Daniels served as one of the gubernatorial debate moderators.

The following is a snapshot and summary of the topics and answers in tonight's debate.

Question: Chief Culp, what do you say to those to those who believe that your approach would not only kill more people but prolong the pandemic?

Culp: I’ve never come out and spoke against wearing masks. I came out against the direction and the order from the government, a public servant, that sits in the governor’s office... As governor, I would put out the information with medical professionals. Tell them what they should do protect themselves and what might happen if they don’t.

Question: Gov. Inslee, why should voters after seven months, think you have a plan to reopen after coronavirus?

Inslee: No, we made a decision about jobs.... What’s most disappointing to me is the (Boeing) company did not give us any way to bring it back when market conditions improved... We need to look at their tax breaks and act in a responsible way so they have an incentive to come back so the next airplane is made here.

Question: Chief Culp, what would you do keep jobs in Western Washington?

Culp: The governor has lost touch with reality…. This is not a business-friendly state. He has exacerbated that with his mandates,  extra regulations and higher taxes.

Inslee: We had the highest rate of GDP growth under my leadership… If this is such a terrible place to do business, why do these businesses keep coming here and growing?

Question: Chief Culp, you said you do not believe there is systemic racism? How do you explain disparities?

Culp: The biggest way that you address disparities is to enforce the law. Let’s talk about human trafficking. What is the governor doing about these unsolved murders of Native American women?

Question: Gov. Inslee, what are you doing about systemic racism?

Inslee: Racial disparities are profound in education, money. We have a president who fans the flames. Actions are not limited to criminal justice issues... I think this is a window to do much more of a look at a way for kids of color to be ready for kindergarten so they don't fall behind. Let's look for health care. 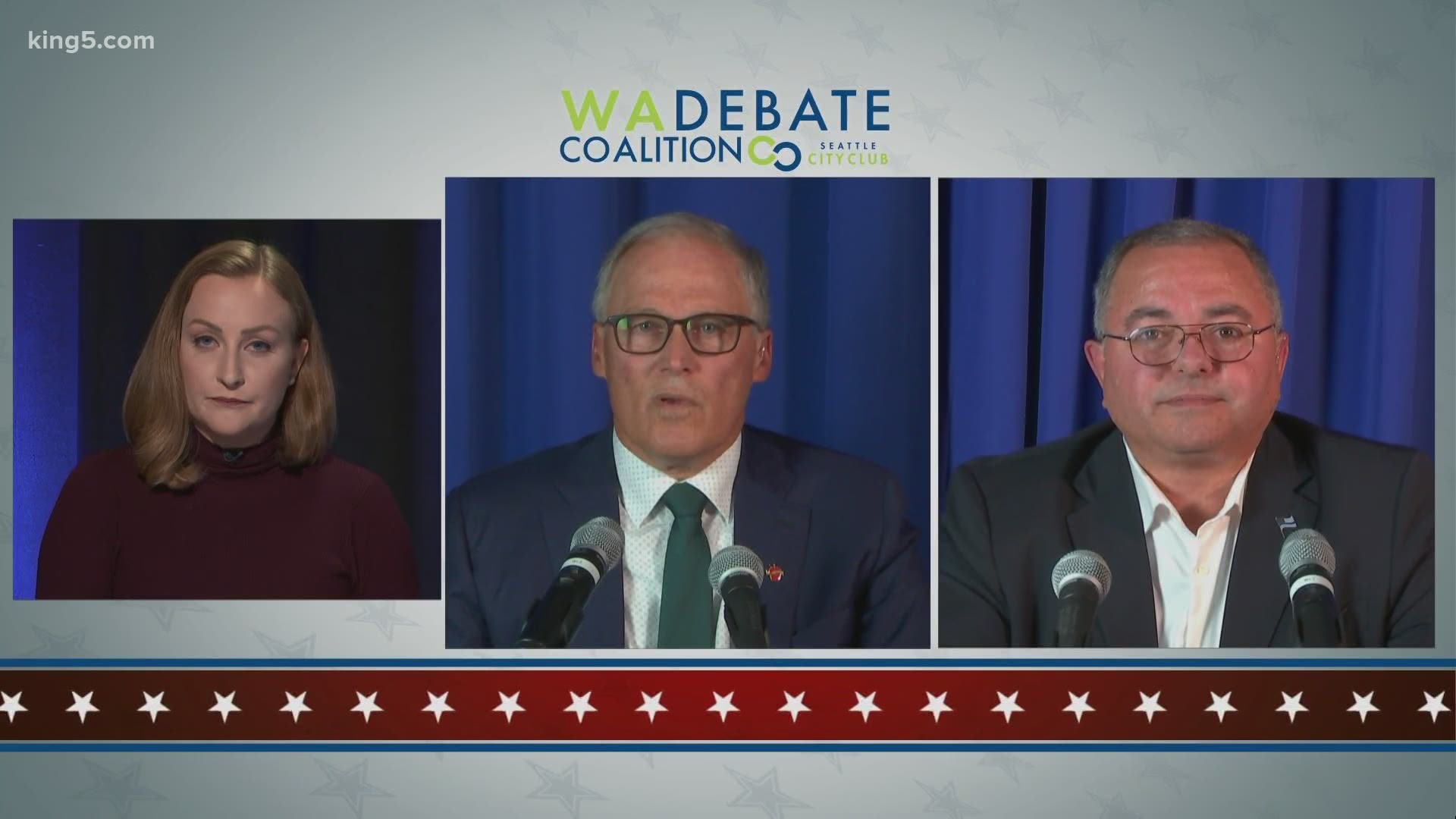 Question: Gov. Inslee, why didn't you know about CHOP when you were asked about it two days after it started?

Inslee: If you look at the facts of the situation, I could not have been oblivious to it because I deployed the Washington State National Guard. We had state troopers available at Seattle's request. It was frustration -- You had tens of thousands peacefully protesting and some came in and started violence. This violence is unacceptable at any level.

Question: Chief Culp, when you do support the presence of federal forces on local streets in response to civil unrest?

Culp: We have a right to peaceably protest. When people are throwing stuff that's not First Amendment. That is a crime, rioting he sent them in there at their request but he disarmed them...I will never ever send our men and women unarmed into that situation to arrest criminals and put them in jail.

Question: Chief Culp, how would you address necessary budget cuts?

Question: Gov. Inslee, how will you address the transportation infrastructure needs despite the state's revenue shortfall?

Inslee: I think we need a big capital budget this year so we can put people to work... I have already cut over half a billion dollars... Those were painful at times. We have $4.5 billion extra in revenue going forward.

Question: Chief Culp, you've raised the question that the wildfires were coordinated on your website.

Culp: I never said that. I don't have any evidence that the fires were coordinated. It's kind of suspect that these fires started with no storms going on. These fires are a result of poor management on the state level... We need to manage our forests and we need to clean them up.

Question: Gov. Inslee, we are more than 2 million acres behind on forest management.

Inslee: We have improved our management while I've been governor. Our investment has gone up 7 or 8 times. There are 22 million acres of forest in our state. We are increasing thinning.

Question: Gov. Inslee, how do you address the high profile mismanagement lapses, such as the unemployment fraud at the start of the COVID-19 crisis and the decertification of Western State Hospital?

Inslee: We have been moving heaven and earth to send checks to people and in the midst of that these criminals of a sophisticated international ring made off with 2%. But 98% went to Washingtonians. We’ve expanded workers comp and unemployment. We want to help them.

Question: Chief Culp, how will you go from managing a police force of just yourself to managing a state of 7 million people and more than 68,000 state employees?

I am not running to be the leader of everyone's family or your business or you. You the citizens will be the leader of yourselves. I will be a governor who understands the servant role of the government. 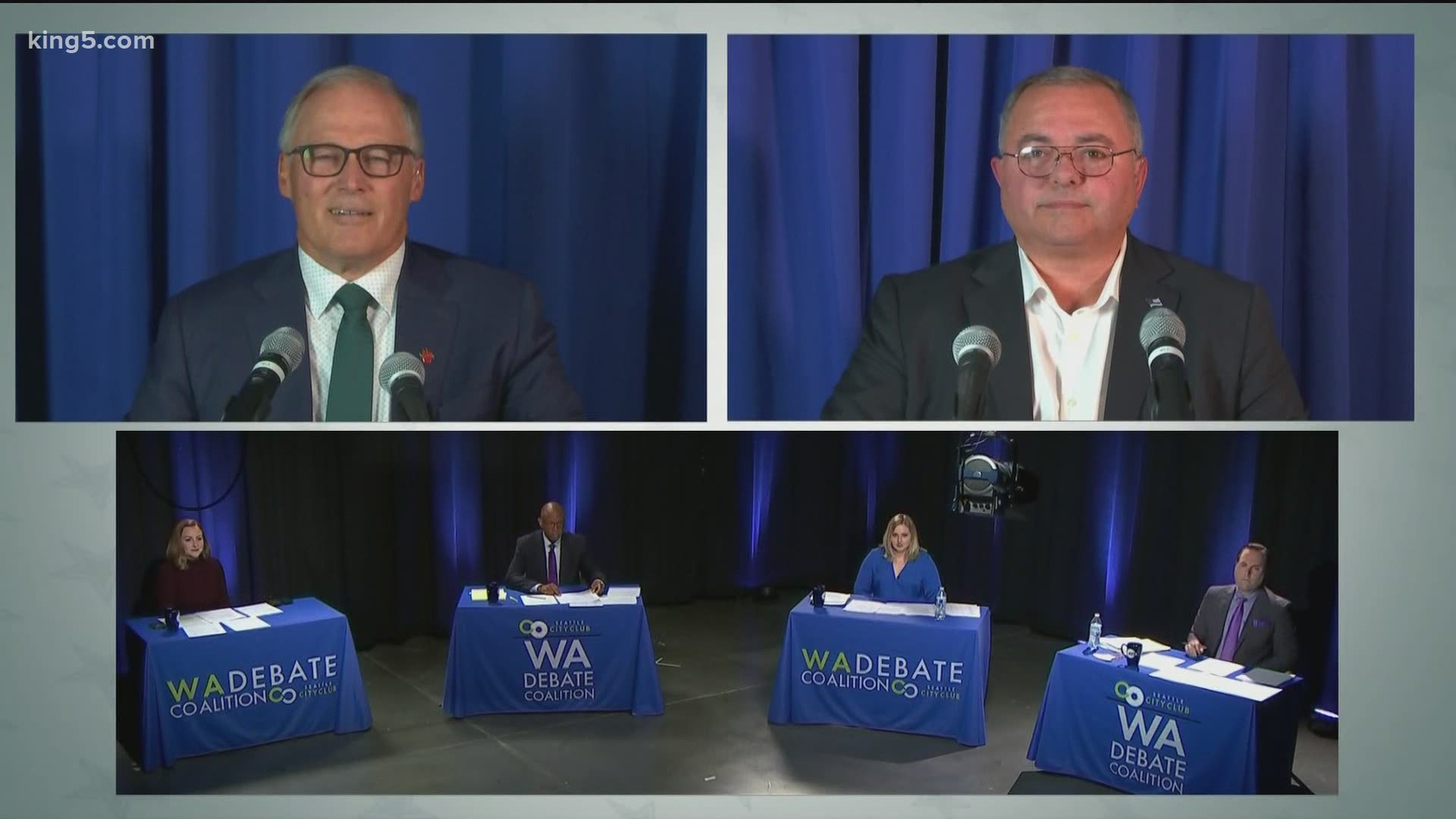