Results from Washington's top races as ballots continue to be counted

Here are the top races we're tracking in the Washington state general election on Nov. 3, including governor, lieutenant governor and attorney general. 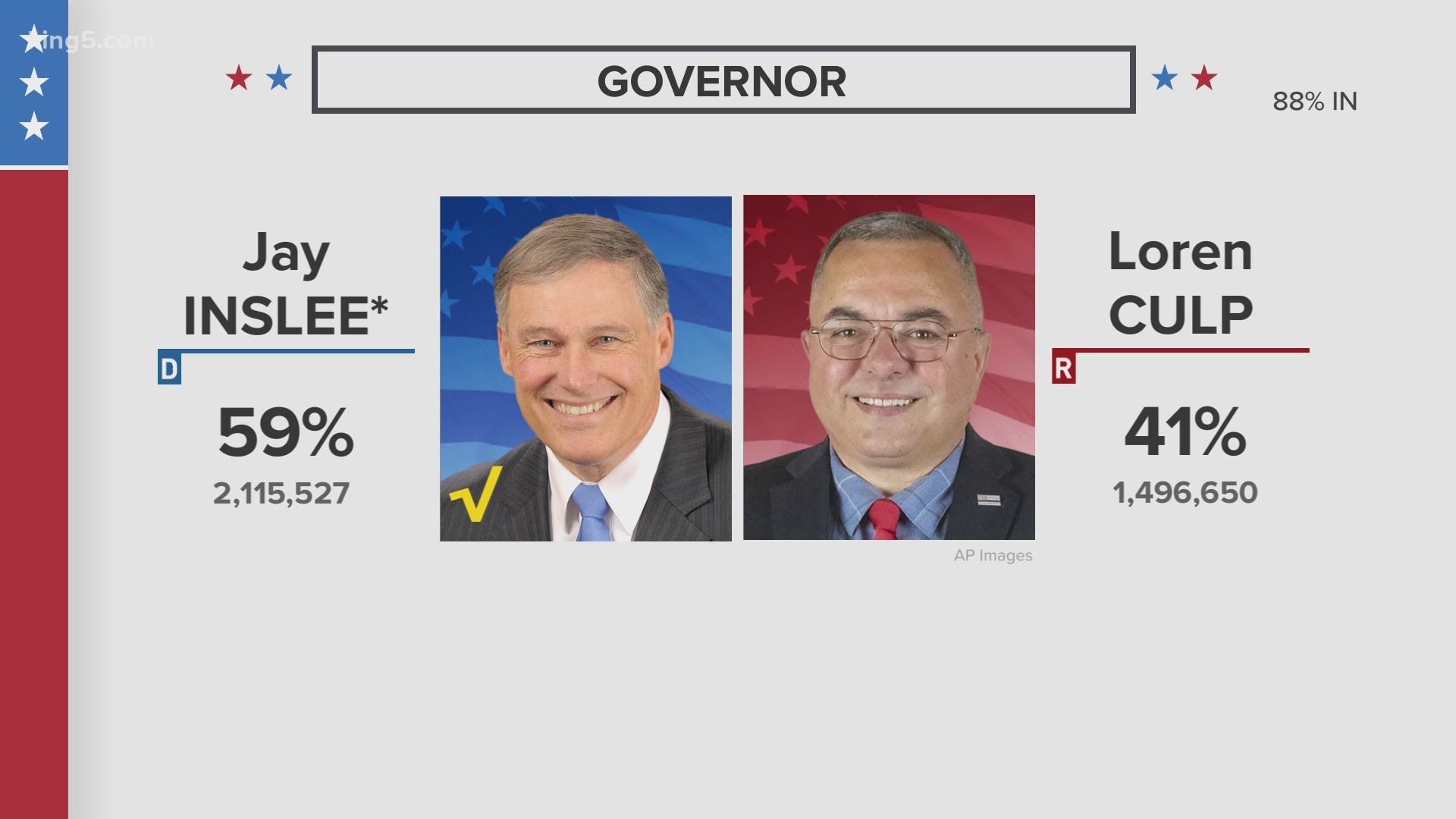 OLYMPIA, Wash — Washington Gov. Jay Inslee declared victory for a third term as governor against Republican challenger Loren Culp. Inslee will be the first third-term governor in Washington state since Dan Evans, a Republican who was governor from 1965-1977.

Democratic Gov. Jay Inslee won a third term as Washington's governor with a large portion of the vote in early results.

Inslee claimed victory over Republican challenger Loren Culp, the former police chief of Republic, Wash. Culp has yet to concede the race, despite Inlsee's 18% lead.

Heck and Liias are both Democrats.

Nearly a dozen candidates lined up in the August primary to take Lt. Gov. Cyrus Habib's seat after the Democrat announced earlier this year that he would vacate it to join the clergy.

Ferguson has been attorney general for eight years.

The race for Secretary of State is too close to call.

Initial results showed incumbent Kim Wyman and Democratic challenger Gael Tarleton were tied. But as more results have come in, Wyman has inched ahead with 52% of the vote to Tarleton's 48%.

Wyman, a former Thurston County auditor, has served as secretary of state since 2013. Tarleton, a Democrat, has served as a state representative and Seattle Port commissioner.

Wyman is one of just two Republicans to hold a statewide office in Washington. Treasurer Duane Davidson, who also faces a Democrat in the general election, holds the other office.

U.S. Rep. Kim Schrier, a Democrat, is leading in early results against Republican challenger Jesse Jensen, who's worked in health care and tech, for Washington's District 8.

Republicans hope to win back the 8th congressional seat after losing it to Schrier in 2018. It was the first time a Democrat had won District 8.

An expansive and diverse district, District 8 covers parts of King, Pierce, Chelan and Kittitas counties. The seat is held for two years.

Strickland most recently worked as the president and CEO of the Seattle Metropolitan Chamber of Commerce.

Strickland will represent parts of Pierce, Thurston, and Mason counties for two years.

Public Information Officer Ed Troyer has won the race for the position of Pierce County sheriff. He was facing off against Pierce County Sheriff Lieutenant Cyndie Fajardo.

The seat is open after Sheriff Paul Pastor announced his retirement.

Troyer has been with the sheriff's department for 35 years, including 15 years as a detective. Fajardo is a 32-year veteran of the department and served as president of the Pierce County Deputy Sheriff's Guild from 2006-2015.

Referendum 90 will require all public schools to provide comprehensive sexual health education that is medically and scientifically accurate, and age-appropriate for all students, according to the Secretary of State's (SOS) Office.