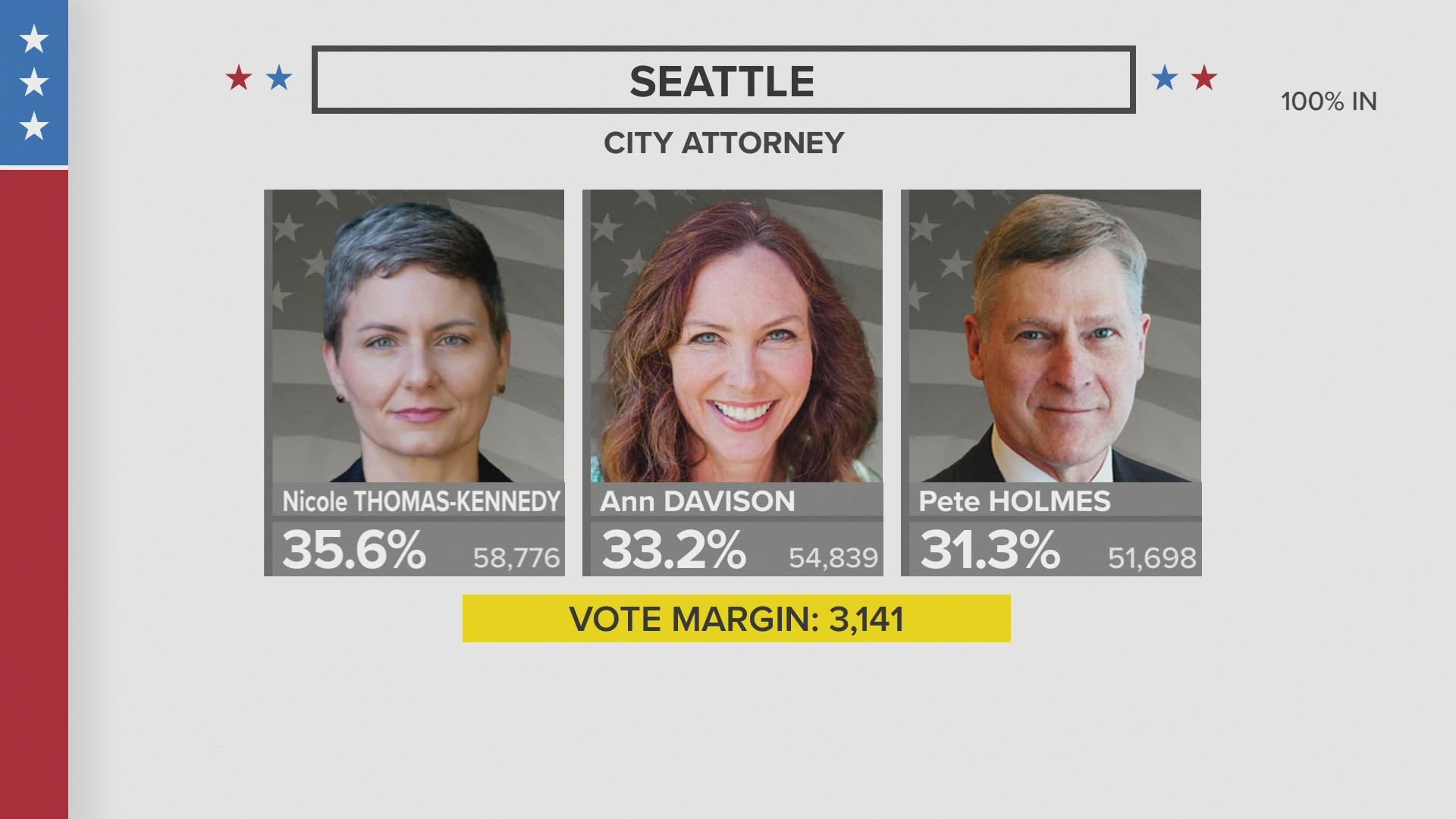 "After two decades of public service to Seattle – the last 12 as your City Attorney – it’s time to acknowledge that my opponents will be advancing to the general election. While defeat is difficult to accept, it’s inconsequential compared to the collective pain we’ve suffered as a City throughout this pandemic," Holmes said in a statement, Friday.

After a fourth ballot count Friday, public defender Nicole Thomas-Kennedy is leading the race with 36% of the vote, and attorney Ann Davison is trailing closely with 33% of the vote. Holmes had 31% of the vote as of Friday.

The top two candidates in a primary election advance to November's general election. Although Holmes will not be one of them, he said he will continue to focus on the work saying, "Looking forward, I have five months left as City Attorney, and I don’t intend to waste them."

Holmes is in his third term. Scroll down to see his full statement on conceding.

Davison, who previously worked for the Sonics, said in her campaign statement she wants to be "proactive not reactive" when it comes to crime and pledged to work collaboratively regionally to "restore public safety."

"By fixing this critical link of public health and safety, we begin to see improvement in the livability of our city," Davison said.

Davison also ran for Seattle City Council in 2019, saying she was fed up with how city hall was handling crime and homelessness.

In her campaign statement, Thomas-Kennedy argued the city should stop overspending on policing, prosecuting and jailing low-level offenses that disproportionately impact low-income people and people of color. Thomas-Kennedy also pushed for police reform.

"Changing these things will actually make our city safer, more equitable, and more environmentally sustainable," Thomas-Kennedy said. "We’ve built a system that is not working, and it is time to dismantle it from the inside."

"After two decades of public service to Seattle – the last 12 as your City Attorney – it’s time to acknowledge that my opponents will be advancing to the general election. While defeat is difficult to accept, it’s inconsequential compared to the collective pain we’ve suffered as a City throughout this pandemic.

"Looking forward, I have five months left as City Attorney, and I don’t intend to waste them. I’m already working with Seattle City Council to establish a public Victim Compensation Fund to help make crime victims whole. I’ll continue to build upon our proven Choose 180 pre-filing diversion program, which has had a 92% non-recidivism rate since 2017. And early next week, I’ll appear before U.S. District Court Judge James Robart to report on our continuing effort to reform and improve our police department.

"The City Attorney’s Office is staffed with talented and dedicated public servants, and I expect the next City Attorney will learn to rely on the expertise of the paralegals, receptionists, information technologists, legal assistants, victim advocates, and lawyers who made serving in this position the highlight of my professional career. It's with their knowledge and skills that my successor will be queued up for trial against Monsanto for polluting the Duwamish River next year, to continue defending the JumpStart tax to aid the unsheltered, and to cut the ribbon on a new criminal diversion program for older adults.

"As attention turns to the General Election, candidates can and should levy criticisms – but I hope the public holds them accountable to making accurate claims. The City Attorney’s Office does not have jurisdiction over felonies like murders, burglaries, drug offenses, or auto theft. Low-level cases like shoplifting and trespass are referred to the newly-established Community Court where intervention and restoration are the outcome, not jail. If we keep things honest, Seattleites will be rewarded with a fruitful and dynamic debate that will help define Seattle’s future for the next four years. Journalists play a key role in this process, too, and I hope that they will be true to their core responsibility to help fully inform the voters.

"After facing one candidate who considered my criminal policies too lax and another who considered them too draconian, it’s clear Seattle’s a city with fractured views, sadly reflective of the polarized politics that grips our nation. Whether the Republican candidate or the Abolitionist candidate prevails in November, they’ll face a truly daunting set of challenges, not least of which includes protecting the City from an avalanche of litigation arising out of the Durkan administration, and a thousands-deep criminal case backlog wrought by the pandemic closure of our courts.

"I’m beyond thankful to my supporters, donors, Democracy Voucher holders, campaign team, and most importantly to the voters who selected me to represent them in three citywide elections. Lastly, I want to thank my wife and fellow lawyer for tolerating life with an elected official. This Sunday we’ll celebrate our 40th Wedding Anniversary – an apt time to consider our next chapters together!

"So, congratulations, candidates, and best of luck in the General Election. With a city so ideologically splintered, whoever wins will certainly need it."