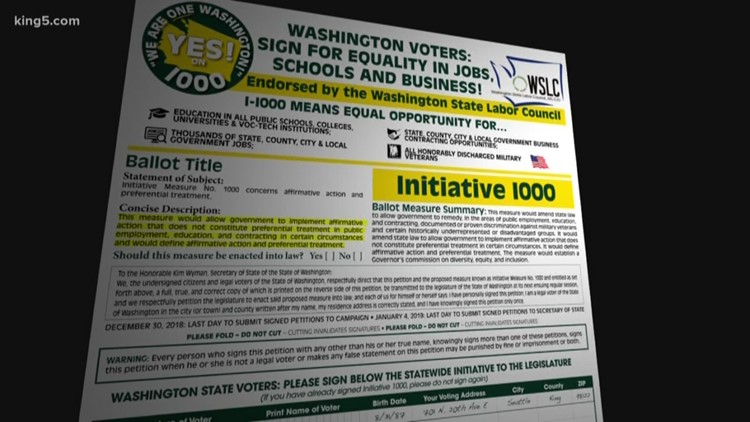 OLYMPIA, Wash. — Washington voters have narrowly rejected a ballot measure seeking to reinstate the use of affirmative action in state employment, contracting and admission to public colleges and universities.

Referendum 88 was being rejected Tuesday by 50.4% of voters with a margin of just over 14,000 votes. Counties in vote-by-mail Washington had been updating their counts daily since last week's election, and while the final margin of the loss may change as remaining votes are counted, the bulk of the approximately 2 million ballots cast have been tallied.

The measure asked voters whether they wanted to approve or reject Initiative 1000, which was passed by the Legislature in April. I-1000 amended current statutes that prohibit state government from discriminating against or giving preferential treatment to individuals or groups based on race, sex, color, ethnicity, or national origin in public employment, public education, or public contracting.

The measure would have allowed the consideration of being part of a minority group to be a contributing factor for a qualified applicant. Along with race, sex, and ethnicity, the measure allowed for consideration of age, disability and honorable discharge or military status. It would have prohibited using factors such as race as the sole qualifier and banned mandatory quotas but would have allowed state agencies and public colleges and universities to establish diversity goals and timelines. A commission would have been created to direct and oversee compliance.

RELATED: What is Referendum 88 in Washington state?

Opponents of the change argued the measure would have led to even more inequity.

"Now that we know the people want to keep the current law, it's time to talk about how to enforce the current law," I-1000 opponent Linda Yang, with the Let People Vote campaign, said. "The law is very clear. No discrimination based on race or gender."

I-1000 was supposed to take effect in July but was put on hold after opponents collected enough signatures to force a referendum.

The measure was losing in all but four of the state's 39 counties, but strong support in King County — the state's most populous — had kept the margin close.

Washington is one of eight states — including California, Florida and Oklahoma — that ban affirmative action in state government and public colleges and universities, according to the National Conference of State Legislatures. Washington's ban came with 1998's Initiative 200, which was approved by 58% of voters.

A 2017 opinion by the state attorney general said that I-200 "does not categorically prohibit all race- and sex-conscious actions regarding state contracting," stating it only prohibits situations where race or gender is used to select a less qualified contractor over a more qualified one.

April Sims, co-chair of the Washington Fairness Coalition that supported I-1000, said the amendment to current law was still needed to clarify what state agencies and universities can do to diversify their workforce.

"It's not a divisive issue, it's just a confusing issue," Sims said of the close vote. "We just need more time to have honest conversations about who we are as a state and who we are as a nation and what policies we can pass that lead to more fairness and opportunity for everyone."

RELATED: Voters to decide if affirmative action returns to Washington