A political newcomer from Bonney Lake hopes to flip the 8th Congressional District from Democrat back to Republican. 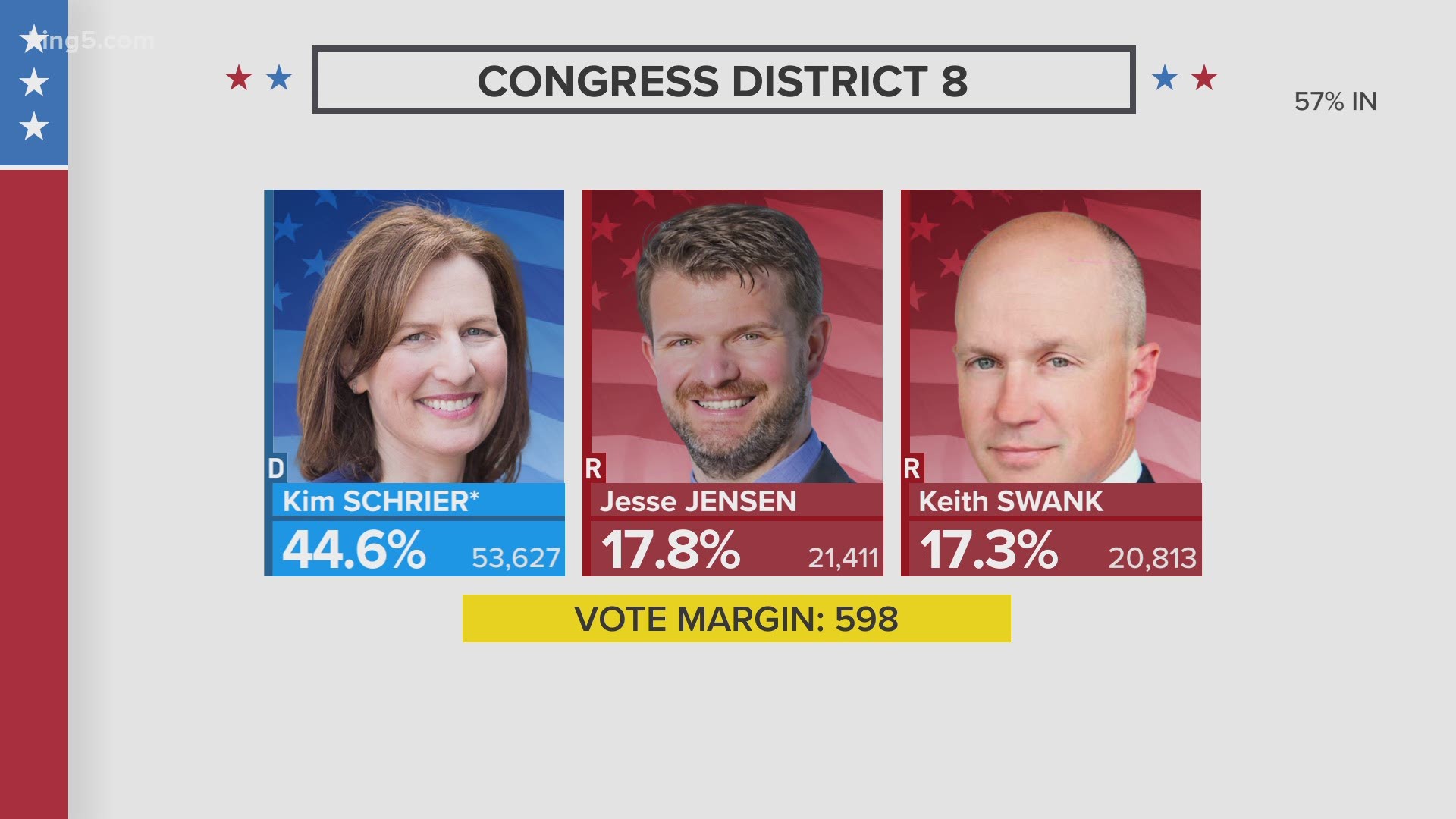 BONNEY LAKE, Wash — Democrat Kim Schrier will advance to the general election with 45% of the votes over two Republican challengers looking to flip District 8.

“I'm feeling really good about these results. I am happy to see really strong support out there from the community. I'm also really excited to see how many people participated that we had record voter turnout," Schrier said Tuesday night.

Republican challengers Jesse Jensen and Keith Swank are trailing by 18% and 17%, respectively. The two were separated by 1,080 votes after a second round of returns were released Wednesday.

Two years ago, it was considered a battleground. Now, Washington's 8th District could be a bellwether on the political climate in the region. The district stretches across east Pierce and King counties, the Issaquah and Sammamish plateaus and central Washington.

"It's all about servant leadership. I have never done this before," said Jensen.

The former Army Ranger turned tech employee did four tours in Afghanistan and hopes his military service translates in the campaign. He's racked up a list of endorsements, including from Dave Reichert, who previously represented the district.

He criticized the now freshman Congresswoman Schrier over her alignment with Speaker Nancy Pelosi as well as her positions on COVID-19 relief and expanding health care.

He admittedly faces an uphill climb in the most unusual of campaigns. Restrictions have made it tough to fundraise or meet people in a traditional sense.

"You know, it's a challenge running in the COVID-19 world,” Jensen said. “That said, we are seeing incredible response from the ground."

Jensen noted that Reichert has been willing to campaign on his behalf.

Yet, he's raised a little under $200,000 for the run, the most of any challenger, according to Federal Election Commission records. It pales to the more than $3 million war chest amassed by Schrier and the millions of dollars poured into the Schrier-Dino Rossi race in 2018. It was considered a key race then by both Democrats and Republicans and a swing district.

"The way I read it is that over the past year and a half, people have noticed that I've had 52 town halls, that I've been working with farmers in the eastern part of my district where I think they were really least confident that I could faithfully represent them, that I've just really worked hard to represent," said Schrier.

She rejected attacks on her position over Medicare for All, saying she wants to enhance the Affordable Care Act to compete with private insurance and bring down the cost of prescriptions.

The early returns on Tuesday were a litmus test on the district, its competitiveness and the impact of President Donald Trump's handling of the crises.

Jensen says as a military veteran, he does support the president.