With results certified, Seattle council members running for reelection advanced to the November ballot, but it was not a runaway for the incumbents. 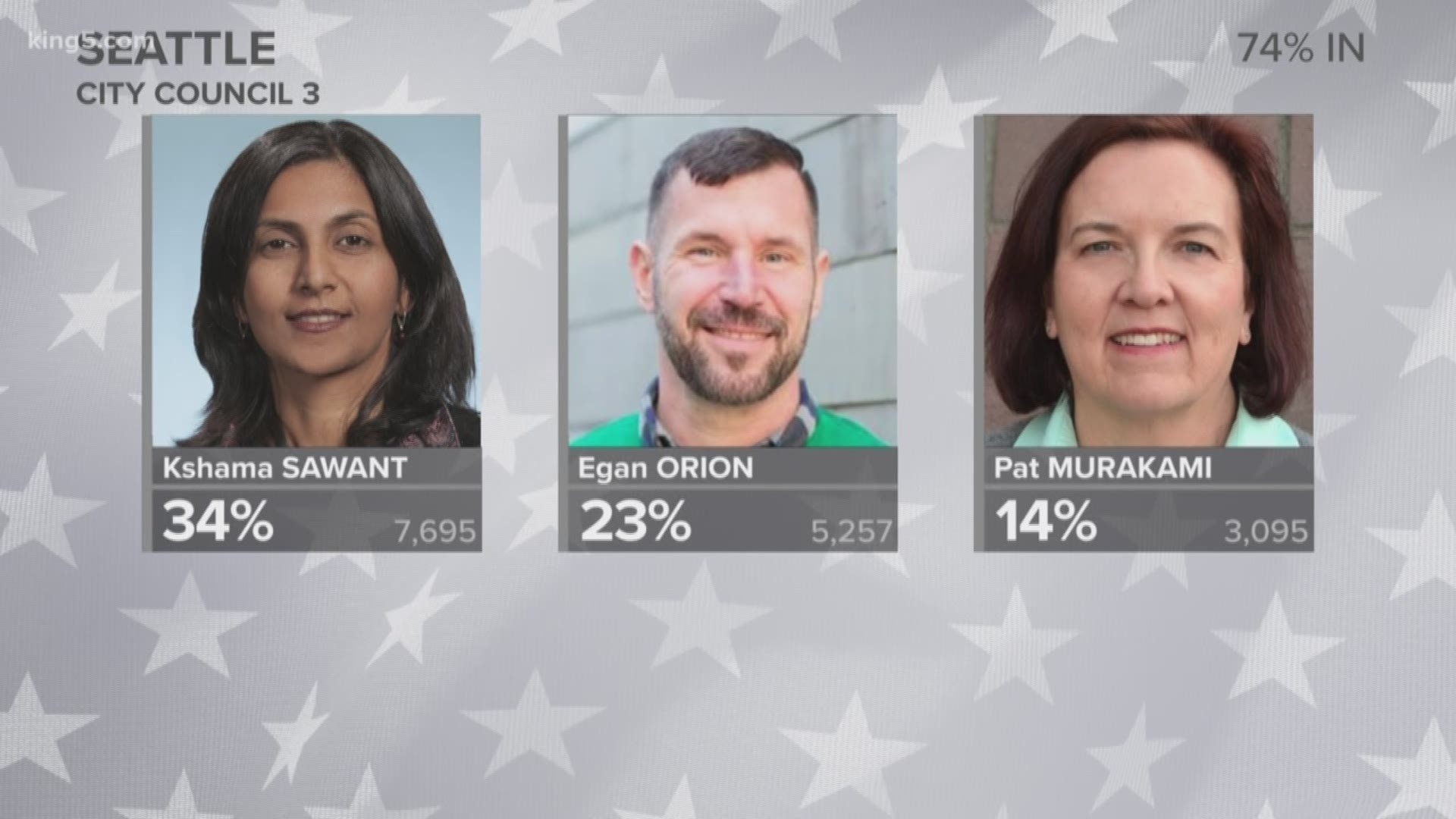 SEATTLE — Several counties in Washington have certified results from the primary election, determining which candidates will face-off in the November general election.

More than 50 people were running for seven Seattle City Council seats, four of which did not have incumbents seeking reelection. Council incumbents Kshama Sawant, Lisa Herbold, and Debora Juarez all advance to the general election.

City Council District 1: Incumbent Lisa Herbold won the primary election with 51% of the votes. Phil Tavel got 32% of the votes. The two will face each other in the general election.

City Council District 2: Tammy Morales and Mark Solomon will face each other in November for the seat of District 2 city councilor. Morales won the primary with 50% of the votes. Solomon has 23% of the votes. One of them will fill the position that will be left vacant by Council President Bruce Harrell at the end of his term.

City Council District 3: Kshama Sawant, who has been in office since 2014 and is currently serving her first full term, won the primary election with only 37% of the votes. Sawant and Egan Orion will face-off in November. Orion had 21% of the votes.

City Council District 4: Alex Pedersen won the primary election for District 4 with 40% of the votes. Pedersen will go up against Shaun Scott, who had 23% of the votes, come November. They are campaigning for a four-year term in the position left vacant by Rob Johnson. Abel Pacheco, currently serving in Johnson’s place, withdrew his candidacy.

City Council District 5: District 5’s first representative and incumbent Debora Juarez won the primary results with 45% of the vote. She and Ann Davison Sattler, who had 27% of the votes in the primary, will go up against each other in November.

City Council District 6: Dan Strauss broke out of a pack of thirteen people and won the primary with 34% of the vote. Heidi Willis was the closest one behind him in results, with 21% of the votes. The two are vying to fill the position that will be left vacant by Mike O’Brien, who has served since 2010.

City Council District 7: Sally Bagshaw, who has served since 2010, is not seeking re-election. Ten candidates were vying to replace her, and Andrew J. Lewis won the primary with 32% of the votes. He will likely face Jim Pugel, who got 25% of the votes, come November.

Position 2: Sam Cho and Grant Degginger will face-off in November's general election to see who will replace Courtney Gregoire on the Port Commission when her term ends on Dec. 31.

Gregoire, whose term began November 2013, currently serves on the Aviation Committee, along with the Puget Sound Regional Council Executive Board, Interbay Public Development Advisory Board, University of Washington Air Quality Study Advisory Panel, and the Visit Seattle Advisory Board.

Position 5: Incumbent Fred Felleman won the primary election with overwhelming support, getting 72% of the vote. Felleman, the port’s current vice president, currently serves on the Energy and Sustainability Committee and several outside board assignments. Felleman will go up against challenger Garth Jacobson in November.

Voters passed King County Prop. 1 with 70% approval in certified results. The measure will tax homeowners $0.1832 per $1,000 of assessed property value. People who own a $500,000 home will pay about $96 per year. An estimated $810 million will be generated over six years in order to improve public spaces.

The current levy expires Dec. 31 and is estimated to generate about $420 million.

Voters approved a levy to increase property taxes for seven years in order to provide library funding.  Seattle Prop. 1 will add around $1.58 a month to the average homeowner’s property tax bill for a total of about $7 per month.

Five commissioners are elected to four-year terms. The commission hires the executive director, sets policy and strategic direction, and approves all major expenditures.

Commissioner 3: Deanna Keller won the primary election with 48% of the vote. It was a close tie for who will be her opponent in November, with Frank Boykin having 28% and Justin Camarata having 23%. Keller and Boykin will face-off for Position 3 on the Port of Tacoma.

Commissioner 5: It was a tight race for Position 5 on the Port of Tacoma, but Kristin Ang kept a solid lead with 41% of the vote in the primary election. Ang will go against Dave Bryant, who got 38% of the votes.

Two Snohomish County Council positions were on the ballot, one of which was an open race without an incumbent running.

District 3: Incumbent Stephanie Wright, who has served on the council since 2010, defended her seat in the primary election and won with 79% of the vote. She will go against challenger Willie Russell in November, who only got 10%.

It’s a wide-open field for Bellingham mayor after Kelli Linville decided to retire in December and not seek a third term.

Whatcom County’s top seat is up for grabs.

The high paying and high-powered position of county executive has brought out a deep field of candidates. The four candidates vying for the position were Satpal Sidhu, Whatcom County councilmember; Jim Boyle, vice president for philanthropy at the Organization for Tropical Studies; Karen Burke, executive director of Domestic Violence and Sexual Assault Services of Whatcom County; and Tony Larson, Business Pulse publisher.

Certified results show Larson won the primary race with 37% of the vote. He will go up against Satpal Sidhu in November, who got 34%.

She had 49% of the vote with certified results.