Sen. Maria Cantwell, who is seeking her fourth term in the Senate, debated Republican challenger Susan Hutchison on Saturday. 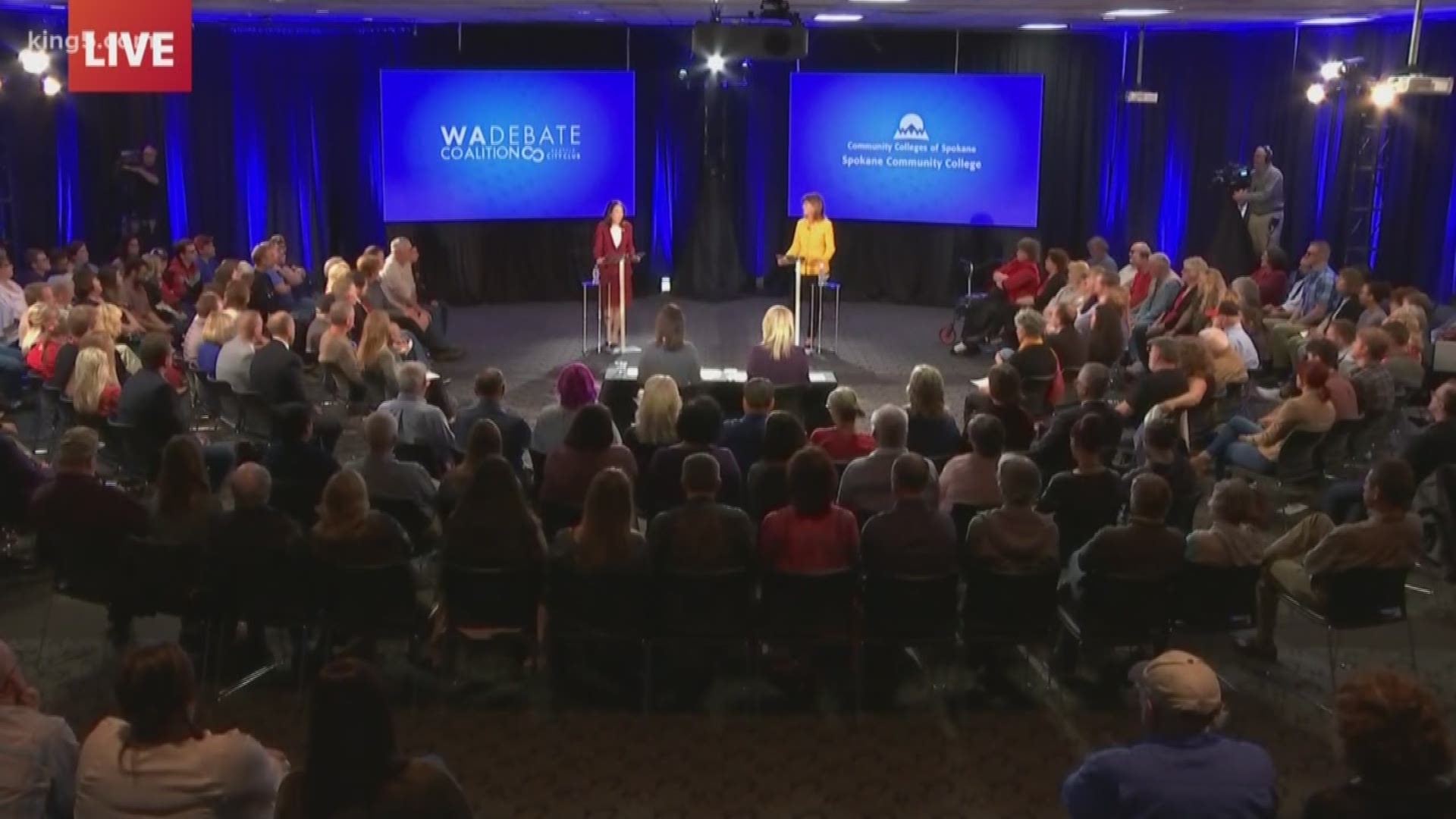 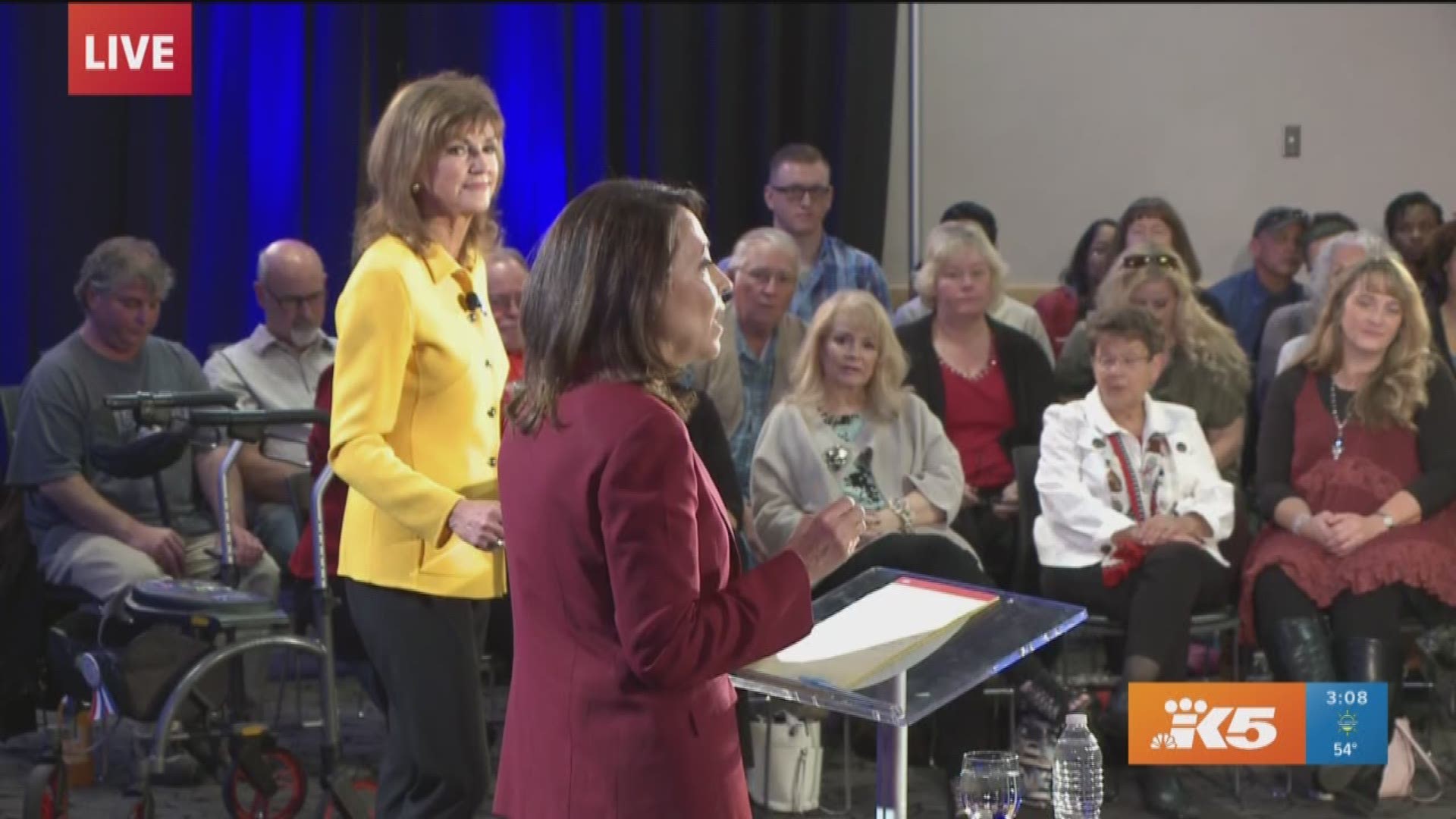 Here’s a rundown on some of the other policy areas the candidates spoke out on.

Cantwell said she supported efforts to reduce greenhouse gasses and reliance on fossil fuels, such as investing in renewable energy and preserving access to fuel-efficient cars.

Cantwell also spoke out against President Donald Trump’s withdrawal from the Paris climate accord, which aims to combat climate change.

“It is not working together with those nations that could help us,” she said.

Hutchison cautioned that any environmental decisions we make be based on science and not science and politics, which she referred to as “junk science.”

She also said balancing environmental policy with the needs of developing economies is crucial.

“We don’t want to make those who are forced to make decisions…they’re not ready to make as they’re needing a growth in energy,” Hutchison said.

Cantwell advocated for more funding on the local law enforcement level to combat the movement of illicit drugs like opioids. She also advocated for working with clinics to re-evaluate what pain management looks like.

“We’re trying to get away from this very addictive drug,” Cantwell said.

However, Hutchison said fighting the opioid crisis all starts at the U.S.-Mexico border and making sure it’s secure.

“There’s no question that drugs are flooding across the southern border,” Hutchison said.

It’s no secret the cost of living has skyrocketed in Washington, and residents are fed up with getting priced out.

Hutchison lamented the growing cost of land, saying it keeps low-cost homes from being built outside metro areas. She blamed costs related to government red tape as one of the factors in that rising cost.

“There’s too much government in the way with permitting, fees, and red tape, and we need to get rid of it,” Hutchison said.

Cantwell said it all came down to needing more supply.

“The good news is that that is actually stimulative,” Cantwell said. “To build more construction and make housing affordable is a good answer not just for the residents, but for our communities and the economy.”

Hutchison said she did not support the concept of sanctuary cities, and it wasn’t beneficial to immigration reform.

“Anytime a municipality takes the law into their own hands and disregards what the law is for the nation, we put ourselves on a slippery slope,” Hutchison said.

Cantwell wouldn’t go so far as to say she agrees with sanctuary cities, but said she supports local governments who don’t want to be penalized federal dollars while immigration reform is being worked out.

“They are on the front lines of this crisis, and they want to go after the people who are really responsible, and they are doing that,” Cantwell said.

Hutchison pushed for forestry management reforms to limit wildfire fuel, slamming Cantwell for blocking efforts in the past.

“I will fight to get logging – intelligent logging, sustainable logging back into our federal forests so they’re not tinderboxes waiting to burst into flames, and because there are no roads, unable to fight,” Hutchison said.

Cantwell also advocated for reducing wildfire fuel and pitched putting timber that’s going to be harvested in cross-laminated timber, which is made from planks of wood that are layered and glued together.

“That way people see it’s going to a dual-purpose of reducing fuel and helping us for the future,” Cantwell said.

The candidates were also asked about recent headlines including the killing of journalist Jamal Khashoggi in a Saudi consulate in Istanbul.

“I want our President and members of Congress to say clearly we do not support the killing of media by governments or their agents,” said Cantwell. “We will get to the bottom to this to make sure we’re speaking for the rule of law and freedom of the press.”

Hutchison responded that as a former journalist, she takes these incidents very seriously. She also briefly pivoted to journalists killed in Mexico in connection to the drug cartels before answering the question.

“As we move forward, we have to remember the Saudis play an important counter balance to the Iranians and Syrians in Middle East,” said Hutchison. “We have to look at all the players in the Middle East with eyes wide open.”

Turning to reports that the Trump administration may be considering a new version of a family separation policy at the border, as a caravan of migrants from Central America makes its way to the Southern border of the United States.

“It’s very important to think about what we can do to stem the tide of this porous border of ours and the entry that has been illegal,” said Hutchison.

Cantwell said she favors more technology at the border and potentially more agents, but she said stability in Central America is also needed to address the exodus of migrants from that region.

Cantwell is seeking her fourth term in office.

Hutchison served as the Washington state Republican Party chair for six years before stepping down earlier this year. Previously she worked as a TV news anchor.

Cantwell has raised nearly $11.3 million in her re-election campaign. Hutchison has raised over $1.3 million, according to Federal Election Commission data.

The debate will replay on KING on Saturday at 7 p.m.

KING 5 and dozens of other media partners are part of the Washington Debate Coalition founded in 2016. The Coalition has hosted previous U.S. Senate debates, a gubernatorial debate, and a mayoral debate, since launching.