Washington state now has a clearer picture on what laws could change this year, and what proposed laws are now dead. 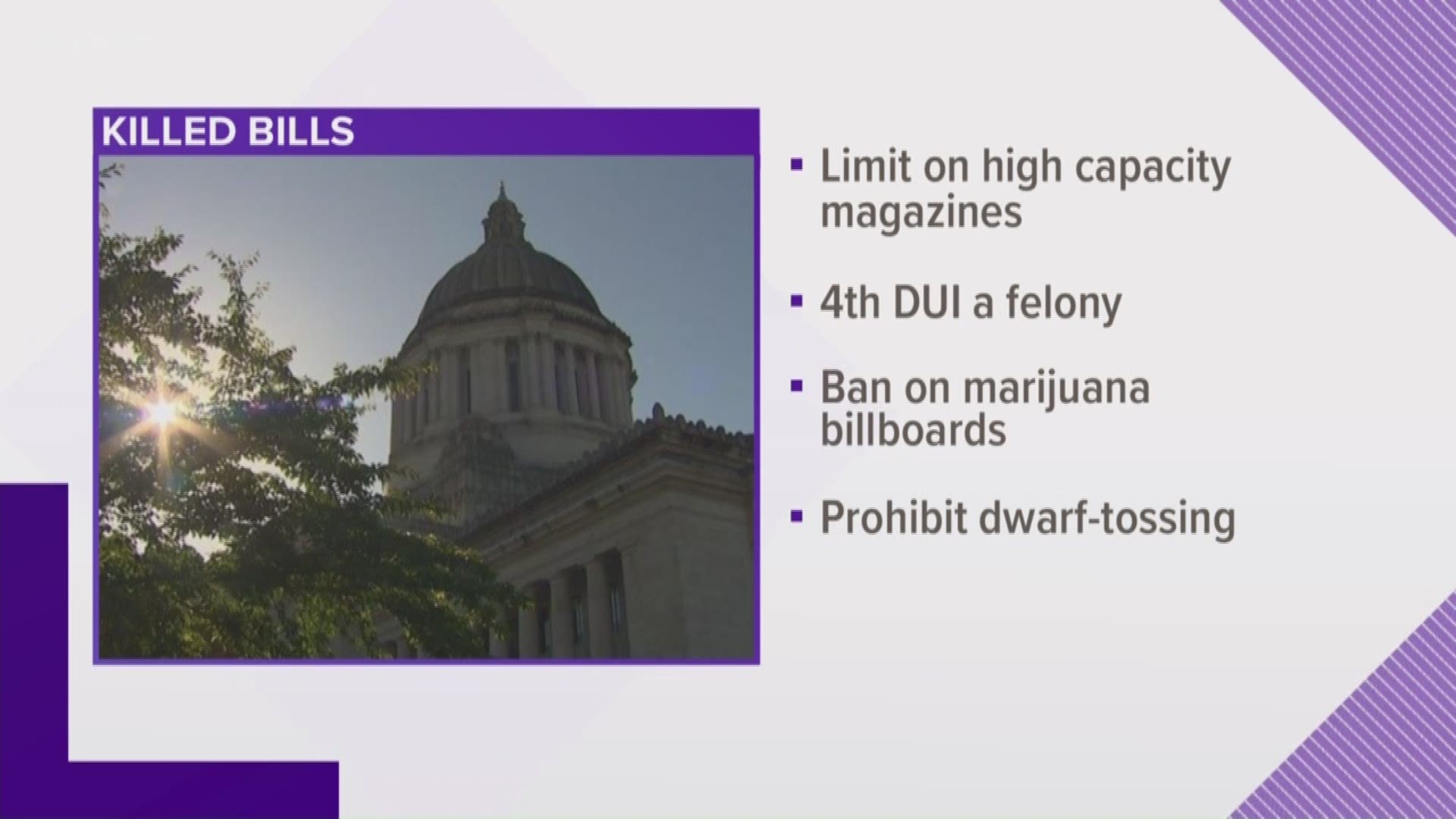 Dozens of bills died in the Washington House and Senate after lawmakers failed to pass the measures before Wednesday’s 5 p.m. deadline.

Some of the measures that failed to pass included a House bill that would have allowed the city of Seattle to use cameras to identify drivers who ‘block the box' at intersections.

A bill that would make a driver’s fourth DUI in 15 years a felony never came up for a vote on the Senate floor.

A proposed ban on dwarf-tossing events that passed out of committee never came up for debate in the Senate.

Lawmakers in the House did vote to establish a behavioral health campus at the University of Washington’s medical school. They also passed a new set of fuel standards requiring producers and importers to reduce greenhouse gas emissions.

Bills that passed out of the House or Senate now go to the opposite chambers. If they pass again, they will go to the Governor’s desk for a signature.

OTHER BILLS WHICH ARE LIKELY DEAD:

PUBLIC RECORDS: A Senate bill that sought to set limits on what the legislative branch needs to release under public disclosure laws stalled in committee. Two House bills that would limit the timeframe of records that could be released never received a public hearing.

SEXUAL HARASSMENT DATA: A measure that would have required all three branches of state government to track and submit data regarding sexual harassment of employees never came up for a vote in the Senate Ways and Means Committee. The bill would have required annual reports to include a variety of data, including the number of sexual harassment complaints made, how many were investigated, and what kind of corrective action was taken. In the wake of the #MeToo movement, four Washington lawmakers have either lost an election or resigned in the past year amid sexual misconduct allegations.

ASSAULT WEAPONS BAN: For at least the seventh year in a row a proposal to ban assault weapons, including semi-automatic rifles, appears to have stalled. Democratic committee chairs declined to schedule either of a pair of bills advancing the measure for preliminary hearings or votes.

HIGH CAPACITY MAGAZINES: Twinned proposals to ban high-capacity gun magazines were voted out of their policy committees but didn't reach full votes in either the Senate or House after Democrats who control the floor voting schedules left both off.

PSYCHIATRIC RELEASE SITING: A proposal requiring violent felons previously committed to the state's psychiatric hospitals to be released back into their own communities never made it out of its policy committee in the Senate. The proposal came from a Pierce County Senator whose district is home to one of the state's two main psychiatric hospitals, and who claimed a disproportionate number of offenders were released there.