All Boeing 737 MAX planes are built in Renton, but now they're piling up all across Puget Sound as the worldwide grounding continues. 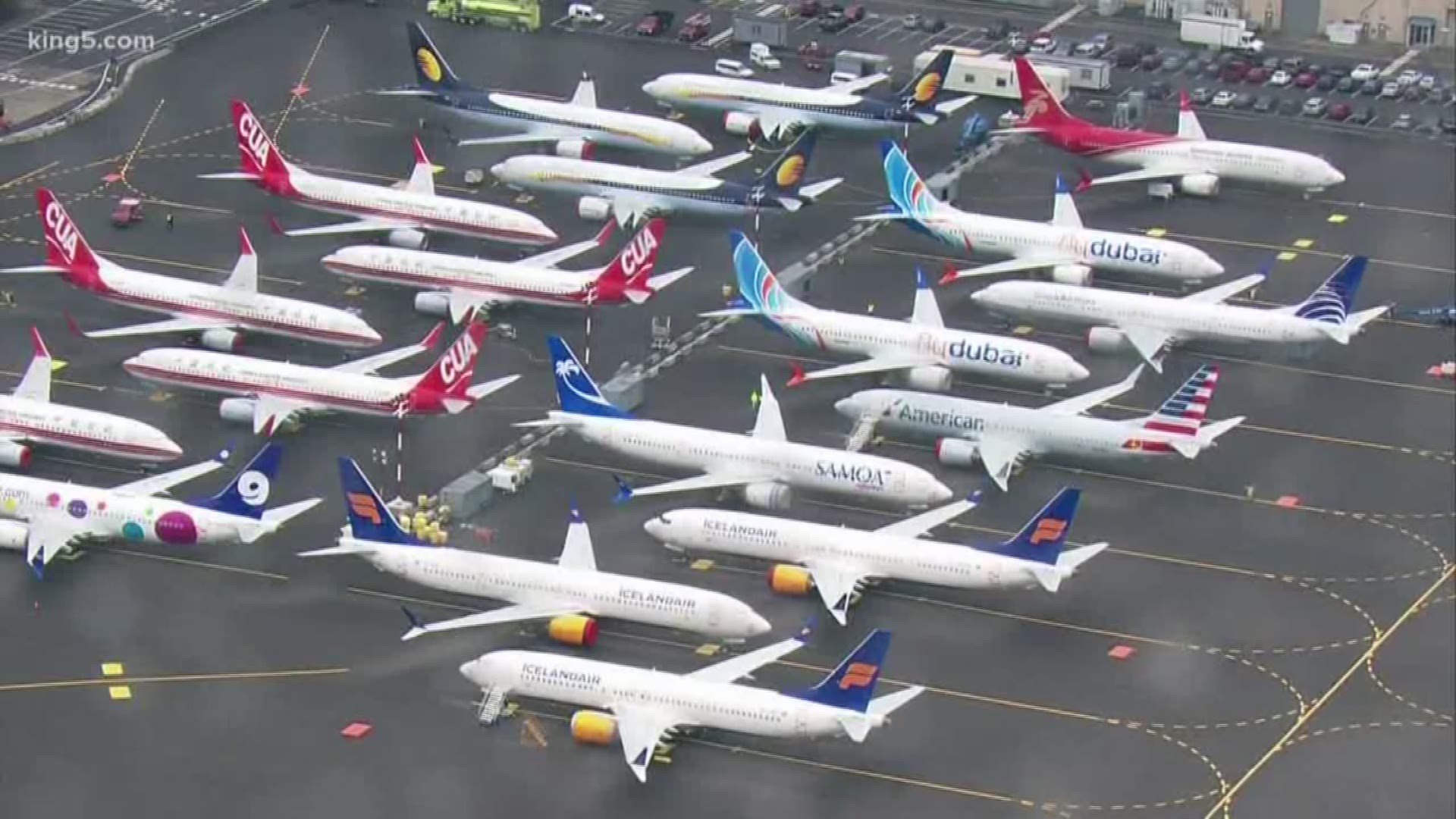 SEATTLE — The home of the Boeing 737 MAX is in Renton, Washington at the south end of Lake Washington near Seattle. Now 10 of the jets appear dressed for long-term storage much farther to the north at Everett's Paine Field, near where Boeing builds its big twin-aisle jets — from the Dreamliner to the 747.

That's ten 737 MAX jets parked on a closed runway — most with their windows, engines and tires covered and protected from the elements.

Back at Boeing Field, a giant airplane parking lot is rapidly running out of room to house more planes. On this lot, not all the 737s are MAX jets, but most are. Over the past week, the storage ramp has rapidly filled up.

While the 737 MAX is grounded worldwide by regulators, in the U.S., the Federal Aviation Administration allows Boeing and airlines that already have possession of their own jets to fly them for testing and re-positioning. Once Boeing runs out of room in Puget Sound, it could fly them to other airports around the country, from Moses Lake, Washington to Victorville, California, for storage, until they can be legally delivered. 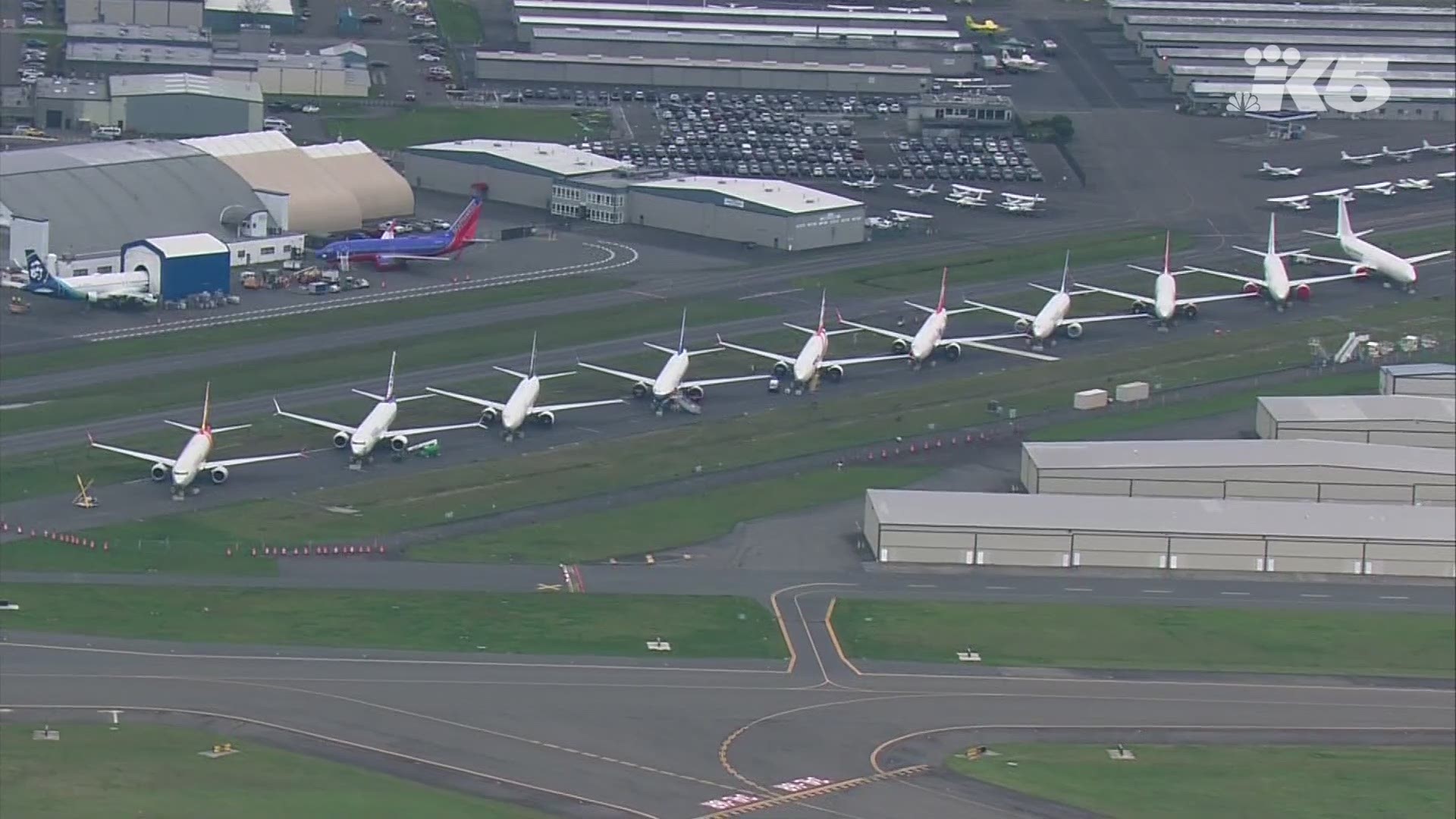 Production of new MAX jets has not stopped, though Boeing said last week it would drop the rate of production from 52 jets a month now to 42 jets each month. To put that in perspective, the line-up of 10 jets at Paine Field represents just under one-fifth of an average month's production.

"I think it's going to be much longer for this plane getting back in the air than people believe," said Bob Toomey, Vice President of Research for S.R. Schill & Associates on Mercer Island. Toomey has tracked and analyzed Boeing as an investment for more than three decades and continues to do so for the financial planning and advising firm. He is not involved in the shareholder litigation.

Two weeks ago, there was optimism about a fix sign-off by regulators, as   Boeing brought 300 airline pilots, regulators and executives to Renton and Seattle to walk through software fixes to the plane's MCAS system, which is believed to have been central to the crash of a Lion Air 737 MAX 8 in Indonesia on October 29 and an Ethiopian Airlines jet in Africa on March 10. In total, 346 people died in those crashes.

But a quick sign-off by the FAA now appears less likely, and a potential indicator came last week as Boeing announced it was going to cut 737 production by ten airplanes each month. The company said no layoffs are expected.

The FAA is also under pressure. After the second accident in Ethiopia, regulators grounded the MAX in their respective countries in rapid succession, with the U.S. Federal Aviation Administration the last to do so. The agency has been rebuked for waiting to ground the fleet, and also for being seen as not taking a stronger oversight role as Boeing worked through the MAX's certification.

The plane entered service in 2017. The FAA said it made the grounding once it was presented black box and physical evidence indicating the cause of both crashes appeared similar.

Those critiques of the FAA may drag out the plane's return to the skies worldwide, even if the FAA signs off soon on the fix. Foreign regulators may be less likely to follow the FAA's lead.

"I think the airlines themselves are going to be scrutinizing these fixes, if you will," said Toomey. "That's where I'm concerned this could result in a longer delay for that plane flying again," which he said may not come until the fall.