A federally-funded advocacy group issued a report that found, despite repeated warnings, the Rainier School in Buckley continues to keep residents at risk. 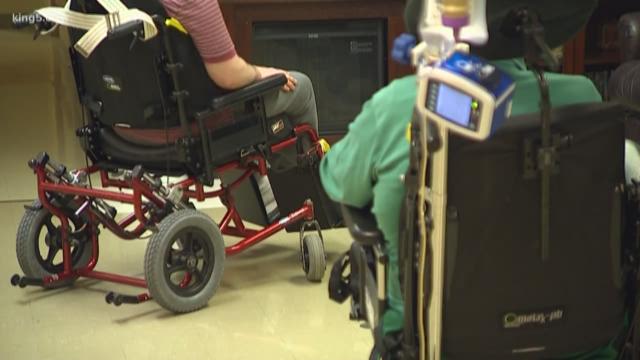 A report released Tuesday by the federally-funded advocacy group Disability Rights Washington (DRW) found that despite repeated warnings and promises from the state of Washington to rectify deficiencies, the Rainier School in Buckley continues to put residents at risk.

“We still find that the conditions at Rainier are dangerous for people to be there,” said DRW attorney Elizabeth Jimenez, who authored the report.

The Rainier School is home to approximately 250 adults with developmental disabilities including autism, cerebral palsy and Down syndrome. It is one of four state-run facilities in Washington where adults with disabilities are cared for and, by statute, are to receive “active treatment” to assist them in becoming more independent with the goal of moving the residents into community settings with proper supports.

But the majority of residents have lived at the facility for years, even decades, and according to DRW are not properly safeguarded or receiving meaningful treatment.

“…disorganized leadership and lack of critical communication persist at Rainier. These failures continue to seriously endanger people with developmental disabilities and it is imperative that the state address the current situation immediately. The state is risking the health and safety of Rainier residents,” wrote DRW in the report entitled “Chaotic and Dangerous: How the state’s poor management of Rainier harms residents with developmental disabilities.”

Since 2015, the KING 5 Investigators have been reporting on problems at Rainier. The institution has a rocky history with federal inspectors finding chronic problems. The state has lost millions of dollars in federal funding because of it.

Some examples include a staff member raping resident Maryann Stallone in 2016. Stallone has severe autism and is non-verbal. Last year the staff member, Terry Wayne Shepard, was sentenced to 24 years in prison for the crime.

In 2015, a resident choked to death at Rainier after staff failed to follow dietary instructions. A second resident died of choking under similar circumstances in 2016.

In 2016, a man strapped to a wheelchair on a dock nearly drown when staff walked away from the resident and the wheelchair rolled into water.

In 2017, 33-year-old resident Johanna Pratt died after suffering a blood clot in her lung. According to the state’s mortality review, Pratt complained to her care providers of difficulty breathing, but Rainier staff failed to call 911 until the next day.

In addition, a series of federally mandated surveys in recent years docked Rainier for failing to engage residents in meaningful activity, called “active treatment.” Instead, residents were found for long stretches wandering around or staring at the wall.

The new DRW report found Rainier leadership, as well as administrators at the state’s Department of Social and Health Services (DSHS), who oversee the facilities, have failed to implement necessary changes to keep residents safe.

DRW reviewed state surveys that found in 2018 one resident was “put at severe risk of choking four times.” In these instances, staff discovered the man had eaten food outside of his approved diet.  Also in 2018, a woman had a “choking incident” when staff fed her food outside her prescribed diet. According to the DRW report, state surveyors found another man eating food outside of his approved diet twice in a week. “The latter incident involved him eating whole apples he found on the facility grounds.”

“Rainier residents remain at serious risk of choking to death or other forms of abuse or neglect,” wrote Jimenez in her report.

DRW found that in 2018, staff continued to fail to provide legally required services such as encouraging residents to be as independent as possible in activities of daily living such as tying shoes and brushing one’s own teeth.

“This results in individuals being warehoused instead of learning new, important skills. The federal government de-certified portions of Rainier last year, due in part to its repeated, pervasive failure to provide legally-mandated treatment. There are no signs that Rainier has substantially improved,” wrote DRW report authors.

Representatives from DSHS provided a statement that acknowledged problems at Rainier, but said improvements have been initiated.

“We are aware of the issues brought up in this report and we have been sharing information about our difficulties to pass the federal surveys at Rainier School for months. Active treatment has been a challenge for Intermediate Care Facilities nationwide,” wrote Lisa Copeland, media relations specialist with the Developmental Disabilities Administration (DDA), within DSHS. “The Department hired WestCare to assess Rainier’s operations and to make recommendations for improving services. Following WestCare’s assessment, Rainier acted on their recommendations.”

Washington is an outlier in the country in operating four large facilities. Every state in the west has closed all of its facilities or has concrete plans to do so, except Washington. Continued funding and operation of the facilities has been a hot button topic within the state legislature for years. Disability advocates have clashed with unions representing state workers and family members with loved ones living in the facilities, who advocate to keep the institutions open.

Jimenez said their new report points to the need for the state to provide more resources to move people out of the state’s institutions into community settings with proper supports to allow for more independent living.

“(The residents) deserve a good life in the community, integrated, and not in some far away crumbling institutions. These are people like our loved ones. They are like other members of our community and that’s why we need to care about what happens to them,” said Jimenez.

When told of the new report, the sister of Johanna Pratt said she was not surprised by the findings. Johanna Pratt is the resident who died under Rainier’s care in 2017.

“Things need to change so people there are safe,” said Julie Matthews of Washougal, Washington. “Not many places will take people with disabilities in the state of Washington. It’s sad. So the places like Rainier that are available need to improve.”