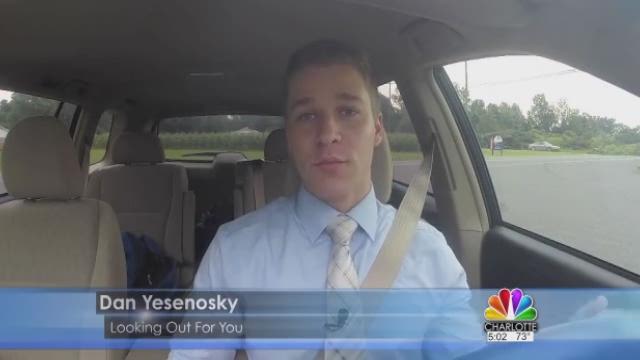 New Orleans, LA - Wind your way through the avenues in this city of the dead, St Louis Cemetery #1, and you will find it . A 9 foot tall pyramid smothered in lipstick kisses. It's the future tomb of actor Nicholas Cage.

Strange yes. But is there a city that treats its dead better than New Orleans?

"This is the city that invented the jazz funeral, " says Florence. "They will bring a body to a cemetery with a band who plays a dirge --a somber minor key song--and then they bury the body and start playing the most raucous uptempo music. Jazz funerals can be a blast!

And Florence says walking through New Orleans cemeteries can be fun too.

"The idea is not to come here and grieve and get out, " says Florence. "It's a place that's welcoming and people feel comfortable and they'll sit here as if they're in a beautiful park."

Most will. But others have scratched "X"'s on tombs mistaken for the one belonging to the late Voodoo priestess Marie Laveau.

Marie Leveau's real tomb repeatedly has to be repainted and repaired.

"Her family doesn't call it voodoo, " says Florence. "They call it vandalism. How is it destroying tombs becomes part of a religious tradition that reveres the deceased? It's bull****".

Voodoo remains a part of the New Orleans mystique and from a French Quarter courtyard,you can visit a real voodoo priestess in her temple. Miriam Chamani's reading of the bones promises no dramatic upheaval in my immediate future.

"Life plans for you and it brings you out into the plan that has already been administere " says Chamani.

But in New Orleans, life is only one side of the coin. New Orleans psychic Cari Roy has been seeing ghosts since she was 9 years old.

"This city really is the magnet to the supernatural.We don't let our spirits go.They're here to welcome you the same way we are. This is hospitality central even for the folks who have gone on to the other side."

After several paranormal incidents at Muriel's Restaurant, including an unexplained smashing of bar glasses against a wall,.the owners invited Roy to investigate. When she entered a room in the old slave quarters she sensed something horrifying.

"I felt the room get heavier, " says Roy. "I felt a sorrow that was just palatable. I just welled up in tears I felt as if somebody had hit me in the solar plexus."

With no historical knowledge of the restaurant Roy described a French nobleman who had died in a calamity. Records showed a man named Pierre Antoine Jordan had hung himself in this room after losing his house gambling.

Every day Muriel's sets a table and pours wine for Jordan and a guest.

In New Orleans you live among ghosts so you might as well treat them well.

"It is that supernatural here. " says Roy. "And people perceive that when they come.