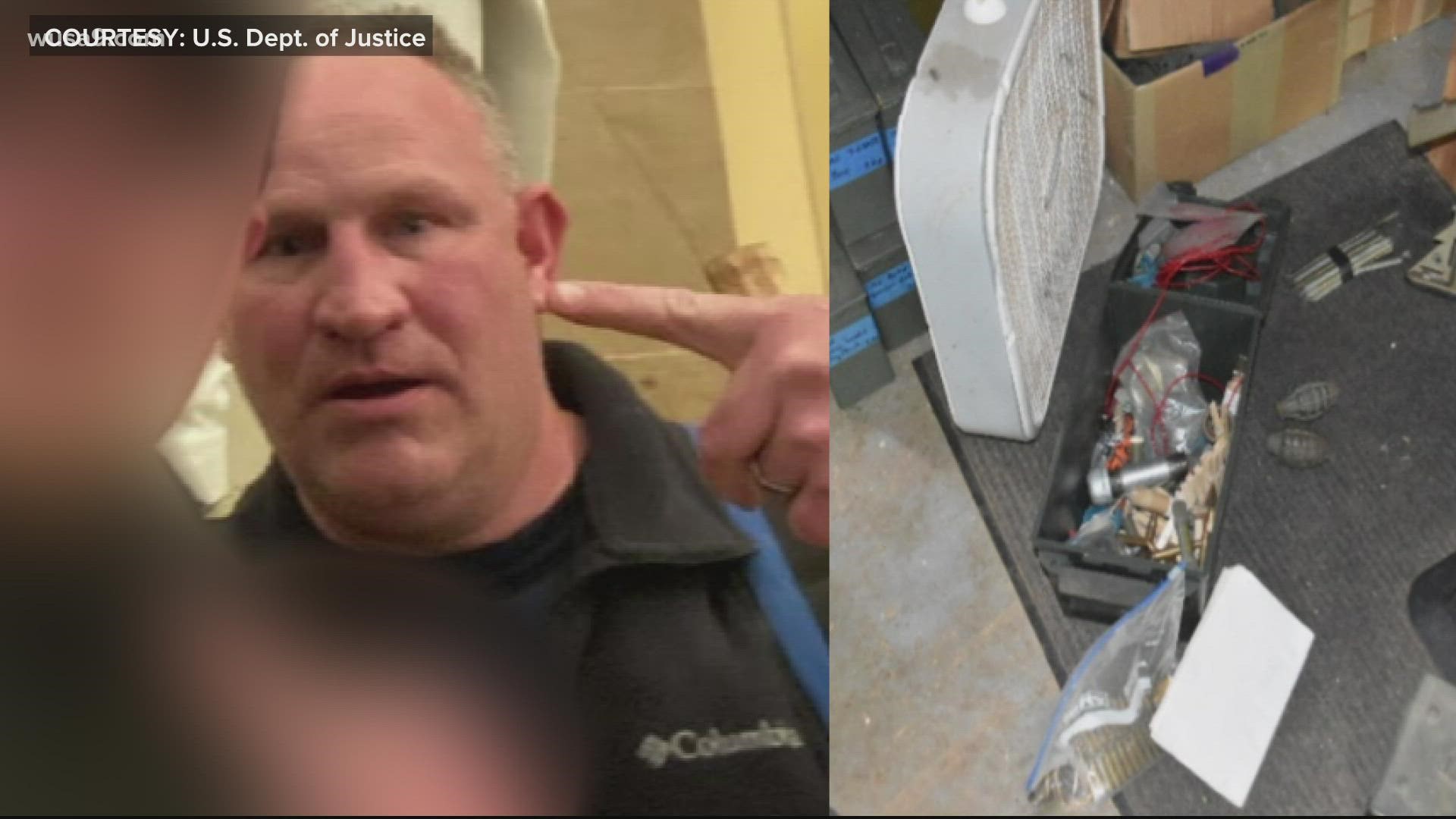 WASHINGTON — A former Rocky Mount, Virginia, police officer indicted in the Capitol riot has been ordered back to prison after a judge found he committed a federal felony by purchasing more than 30 firearms while on pretrial release.

The Justice Department requested and received a new warrant earlier this month for the arrest of Thomas Robertson after a search of his home turned up an M4 rifle, a partial pipe bomb and two M228 fuzes used on training grenades. The DOJ also said it had obtained records showing Robertson purchased 37 firearms since his release and had them shipped on his behalf to a nearby firearms dealer.

Robertson and another Virginia police officer, Jacob Fracker, were charged in January with violent entry and disorderly conduct for their alleged participation in the Capitol riot. A federal grand jury indicted the men in February. As part of their pretrial release, the men were ordered not to possess firearms. Federal law also prohibits anyone under federal indictment for a crime with a sentence of more than 1 year from shipping or transporting firearms or ammunition.

#CapitolRiot: NEW: Prior to a detention hearing later today, the DOJ has filed new photos of two M228 fuzes allegedly found in Thomas Robertson's home. The fuzes are used on training grenades and require a Federal Explosive License to own. @wusa9 @EricFlackTV https://t.co/KnvrOG1ndR pic.twitter.com/X87ZYziADB

In a hearing earlier this month, Robertson’s attorney argued that his client wasn’t actually involved in the shipment of the firearms and didn’t possess them because they were sent to a firearms dealer – although the DOJ presented testimony from the owner of the gun shop that Robertson had visited it to handle the guns. Robertson’s son also testified that the M4 rifle found in his father’s home belonged to him.

But on Wednesday, U.S. District Judge Christopher Cooper ruled against Robertson, finding that he had both violated the terms of his release and likely committed a new felony offense by having the firearms shipped on his behalf. Cooper also said it appeared Robertson knew he was violating the law, based on his efforts to conceal a $3,700 Venmo transaction for firearms.

“It appears that Robertson may have attached the label ‘Wedding Photos’ to a Venmo transaction that was actually for ammunition, suggesting an effort to avoid detection,” Cooper wrote.

Cooper also pointed out that this wasn’t Robertson’s first offense – a previous search of his home in January had turned up other firearms after he’d already been ordered to move them off his property – and that in social media posts after his arrests he appeared to mock the charges against him and suggest further acts of violence.

#CapitolRiot: Robertson's attorney says his client's social media posts about January 6 were more "like his team doing it... not him... you know, 'we' did it. His team did it." For context, here are some of the posts. @wusa9 pic.twitter.com/uwHIDJTE1d

“The undisputed facts demonstrate a concrete risk that Robertson might participate in or provide material support to acts of ideologically motivated violence if released at this time,” Cooper wrote. “His recent social media posts may contain elements of bravado and hyperbole, but they provide evidence that Robertson is sympathetic to calls for a violent ‘revolution.’ Coincidentally or not, Robertson has also embarked on a remarkable shopping spree for high-powered assault weapons.”

Cooper ordered Robertson continue to be held in federal custody while he awaits trial. It was unclear whether he would remain in D.C. or be transferred back to a facility in Virginia, where he lives. As of Thursday, the DOJ had not yet filed new charges against Robertson in connection with the firearm purchases.

We're tracking all of the arrests, charges and investigations into the January 6 assault on the Capitol. Sign up for our Capitol Breach Newsletter here so that you never miss an update.