'I don't care if you believe it or not!' | Judge tells Proud Boy he's going back to jail if he keeps refusing to wear mask

Daniel Goodwyn could soon be facing a new warrant for his arrest if he continues objecting to masking up during pretrial check-ins. 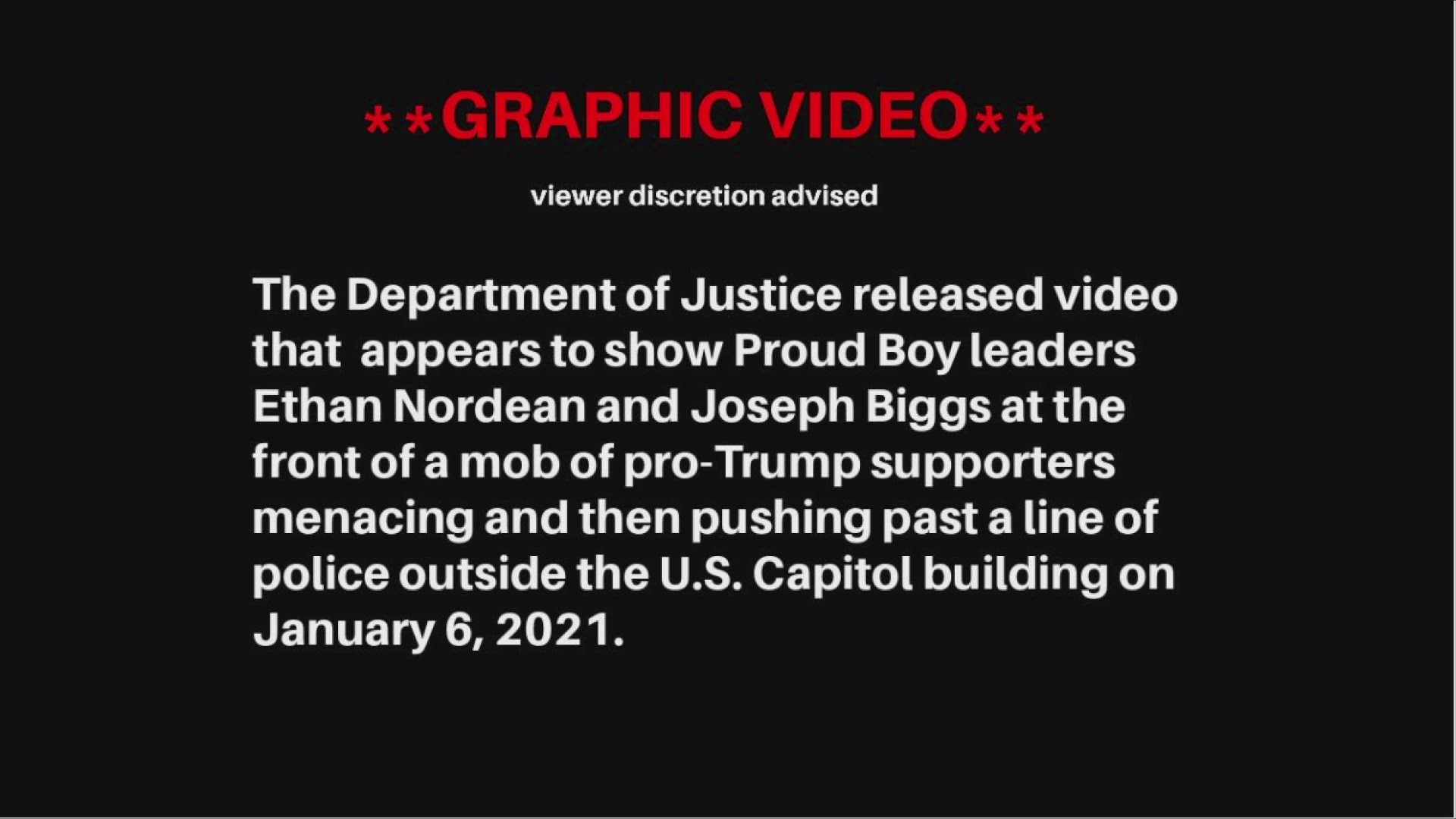 WASHINGTON — A Texas Proud Boy could be facing a new warrant for his arrest if he continues refusing to wear a mask during pretrial check-ins, a federal judge warned him Friday.

During a contentious hearing Friday afternoon, Daniel Goodwyn, of Corinth, Texas, repeatedly suggested to U.S. District Judge Reggie Walton that he was not planning on abiding by a policy – or Walton’s order – requiring him to wear a mask during check-ins with pretrial services. Goodwyn claimed – despite ample evidence to the contrary – that he didn’t believe masks worked or that he could transmit the COVID-19 virus asymptomatically.

“There have been over 600,000 people who have died as a result of coming into contact with this virus, so I don’t care if you believe it or not,” Walton told him. “I’m not going to be a part of other people dying because of what you don’t believe.”

#CapitolRiot: Judge Walton: "You have to understand, sir, that we have a virus that's killing people. And people don't have to put their lives at risk just by coming into contact with you because you're part of the court system." @wusa9 @EricFlackTV pic.twitter.com/TWLZJlaWVE

Goodwyn was indicted in February on multiple charges, including a felony count of obstruction of an official proceeding that carries a potential maximum sentence of 20 years in prison. According to court documents, Goodwyn is a self-described Proud Boy who was captured on video inside the U.S. Capitol on Jan. 6 calling an officer an “oathbreaker.”

Goodwyn was granted pretrial release in March, but on Wednesday, the Justice Department filed a motion asking Walton to revoke that release. In its filing, the DOJ said Goodwyn had repeatedly refused to wear a mask during a June 21 visit to pretrial services and then refused to appear for a July 2 meeting.

The government also noted that during his initial arrest on Jan. 29, FBI agents learned that at least one member of Goodwyn’s household believed they had COVID-19 – however Goodwyn allegedly refused to answer if he was positive, take a COVID-19 test or to wear any personal protective equipment.

Goodwyn eventually agreed to wear a mask for his initial hearing, but since then has returned to “petulant and insolent behavior,” the DOJ said.

“In lieu of complying with the Court’s conditions, the defendant has flouted the conditions, making clear that he does not appreciate the privilege of pretrial release provided to him by the court,” the DOJ said.

Goodwyn’s attorney, John Daniel Hull IV, attempted to explain his client’s behavior by saying he believes he is on the autism spectrum and that forcing him to wear a mask will likely cause him to “flip out.” Goodwyn’s mother also testified that Goodwyn had been seen by an autism specialist, and that she believed he had Asperger’s syndrome, but said she had no documentation of that diagnosis.

Walton said he understood the issues autism might cause, but said he would need paperwork to show a doctor’s diagnosis. He also chastised Hull for a letter he wrote to pretrial services calling an employee “arrogant” and “prissy."

“It’s not your prerogative to chastise an employee of the court,” Walton told Hull, warning that he would be fined next time. “You come to me! You’re supposed to be a respected member of the bar! It better not happen again!”

#CapitolRiot: Pretrial services says they're willing to do home visits for Goodwyn, but that he'll have to wear a mask. Goodwyn: "I understand but I'm not going to do that, sir." Walton tells him he's going to jail if he won't comply. @wusa9 pic.twitter.com/eFgbSdxIWS

Walton told Hull that Goodwyn would either have to wear a mask or be vaccinated; Goodwyn refused to answer a question about his vaccination status in court, but Hull said he did not believe he was vaccinated. He also told Goodwyn that he would issue an arrest warrant for him if he heard he had again refused to wear a mask during home visits, which pretrial services agreed to do in his case.

“I understand, but I’m not going to do that, sir,” Goodwyn replied, saying Texas law didn’t require him to wear a mask in his home.

“I don’t care what the law in Texas is, I’m telling you what my ruling is,” Walton said. “If you don’t do that, I’m going to issue a warrant for your arrest.”

Goodwyn then began protesting further but was stopped by his attorney, who interjected and warned him, “Daniel… you can’t do this.”

Walton ended the hearing with a week’s window for Hull to provide documentation of Goodwyn’s autism diagnosis and another reminder to pretrial services to alert him if Goodwyn again refuses to follow mask rules.

“Let me know if there’s any noncompliance and I will issue a warrant,” Walton said. "I have given Mr. Goodwyn fair notice.”

We're tracking all of the arrests, charges and investigations into the January 6 assault on the Capitol. Sign up for our Capitol Breach Newsletter here so that you never miss an update.