Law enforcement officials are starting to plan for the possibility of armed protesters returning to the nation's capital when the trial starts in 2 weeks. 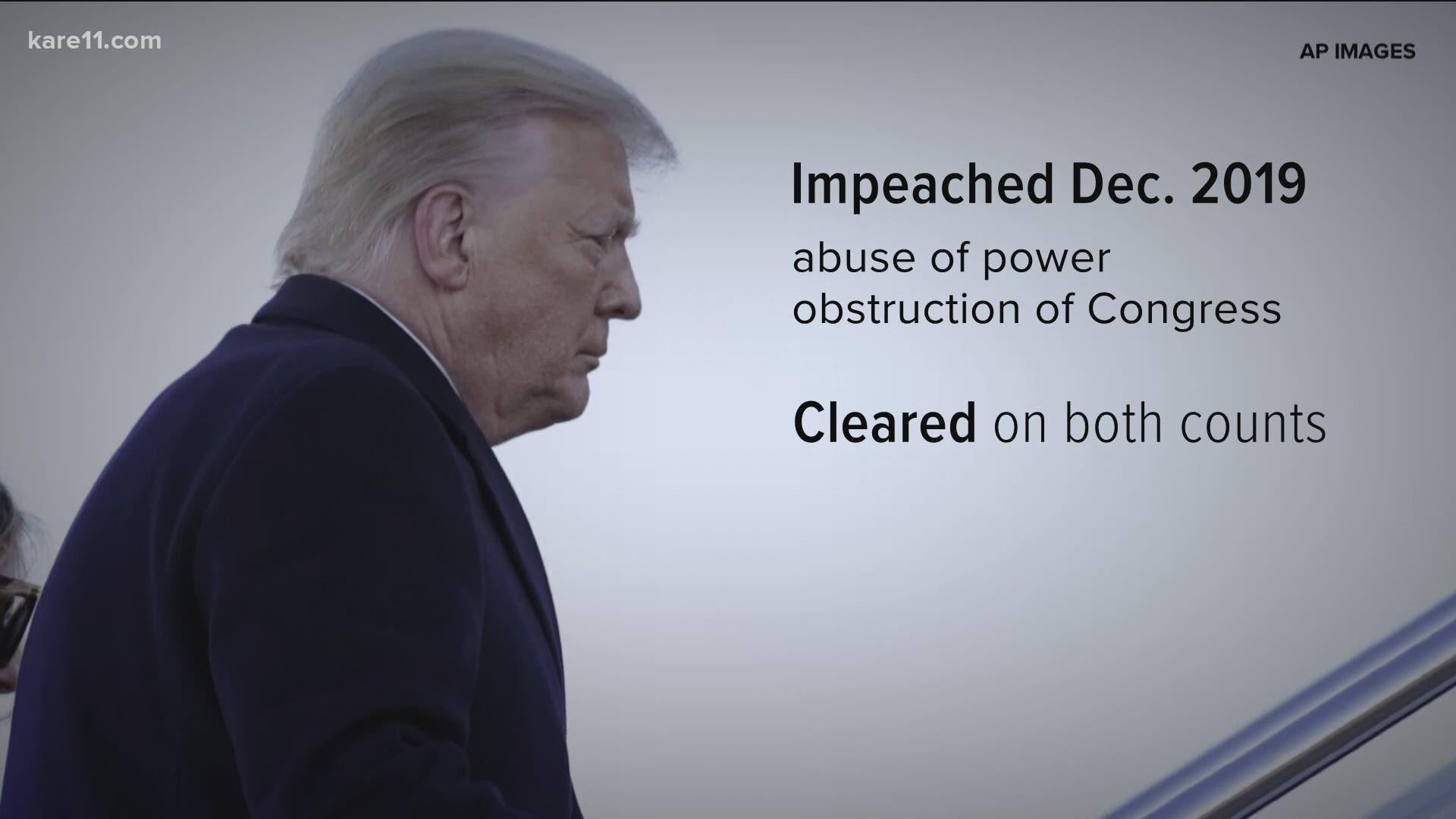 WASHINGTON — Federal law enforcement officials are examining a number of threats aimed at members of Congress as the second trial of former President Donald Trump nears, including ominous chatter about killing legislators or attacking them outside of the U.S. Capitol, a U.S. official told The Associated Press.

The threats, and concerns that armed protesters could return to sack the Capitol anew, have prompted the U.S. Capitol Police and other federal law enforcement to insist thousands of National Guard troops remain in Washington as the Senate moves forward with plans for Trump's trial, the official said.

The shocking insurrection at the Capitol by a pro-Trump mob prompted federal officials to rethink security in and around its landmarks, resulting in an unprecedented lockdown for Biden's inauguration. Though the event went off without any problems and armed protests around the country did not materialize, the threats to lawmakers ahead of Trump's trial exemplified the continued potential for danger.

Similar to those intercepted by investigators ahead of Biden’s inauguration, the threats that law enforcement agents are tracking vary in specificity and credibility, said the official, who had been briefed on the matter. Mainly posted online and in chat groups, the messages have included plots to attack members of Congress during travel to and from the Capitol complex during the trial, according to the official.

The official was not authorized to discuss an ongoing investigation publicly and spoke Sunday to the AP on condition of anonymity.

Law enforcement officials are already starting to plan for the possibility of armed protesters returning to the nation's capital when Trump’s Senate trial on a charge of inciting a violent insurrection begins the week of Feb. 8. It would be the first impeachment trial of a former U.S. president.

Though much of the security apparatus around Washington set up after the Jan. 6 riot and ahead of Biden’s inauguration — it included scores of military checkpoints and hundreds of additional law enforcement personnel — is no longer in place, about 7,000 members of the National Guard will remain to assist federal law enforcement, officials said.

Gen. Dan Hokanson, chief of the National Guard Bureau, said Monday that about 13,000 Guard members are still deployed in D.C., and that their numbers would shrink to 7,000 by the end of this week. John Whitley, the acting secretary of the Army, told a Pentagon news conference that this number is based on requests for assistance from the Capitol Police, the Park Police, the Secret Service and the Metropolitan Police Department. Whitley said the number is to drop to 5,000 by mid-March.

Thousands of Trump’s supporters descended on the Capitol on Jan. 6 as Congress met to certify Biden as the winner of the 2020 presidential race. More than 800 are believed to have made their way into the Capitol during the violent siege, pushing past overwhelmed police officers. The Capitol police said they planned for a free speech protest, not a riot, and were caught off guard despite intelligence suggesting the rally would descend into a riot. Five people died in the melee, including a Capitol police officer who was struck in the head with a fire extinguisher.

At least five people facing federal charges have suggested they believed they were taking orders from Trump when they marched on Capitol Hill to challenge the certification of Biden’s election victory. But now those comments, captured in interviews with reporters and federal agents, are likely to take center stage as Democrats lay out their case.

More than 130 people have been charged by federal prosecutors for their roles in the riot. In recent weeks, others have been arrested after posting threats against members of Congress.

They include a Proud Boys supporter who authorities said threatened to deploy “three cars full of armed patriots” to Washington, threatened harm against Sen. Raphael Warnock, D-Ga., and who is accused of stockpiling military-style combat knives and more than 1,000 rifle rounds in his New York home. A Texas man was arrested this week for taking part in the riot at the Capitol and for posting violent threats, including a call to assassinate Rep. Alexandria Ocasio-Cortez, D-N.Y