The researchers said the whales sometimes eat other species, including halibut, lingcod and steelhead, but they depend most on Chinook. 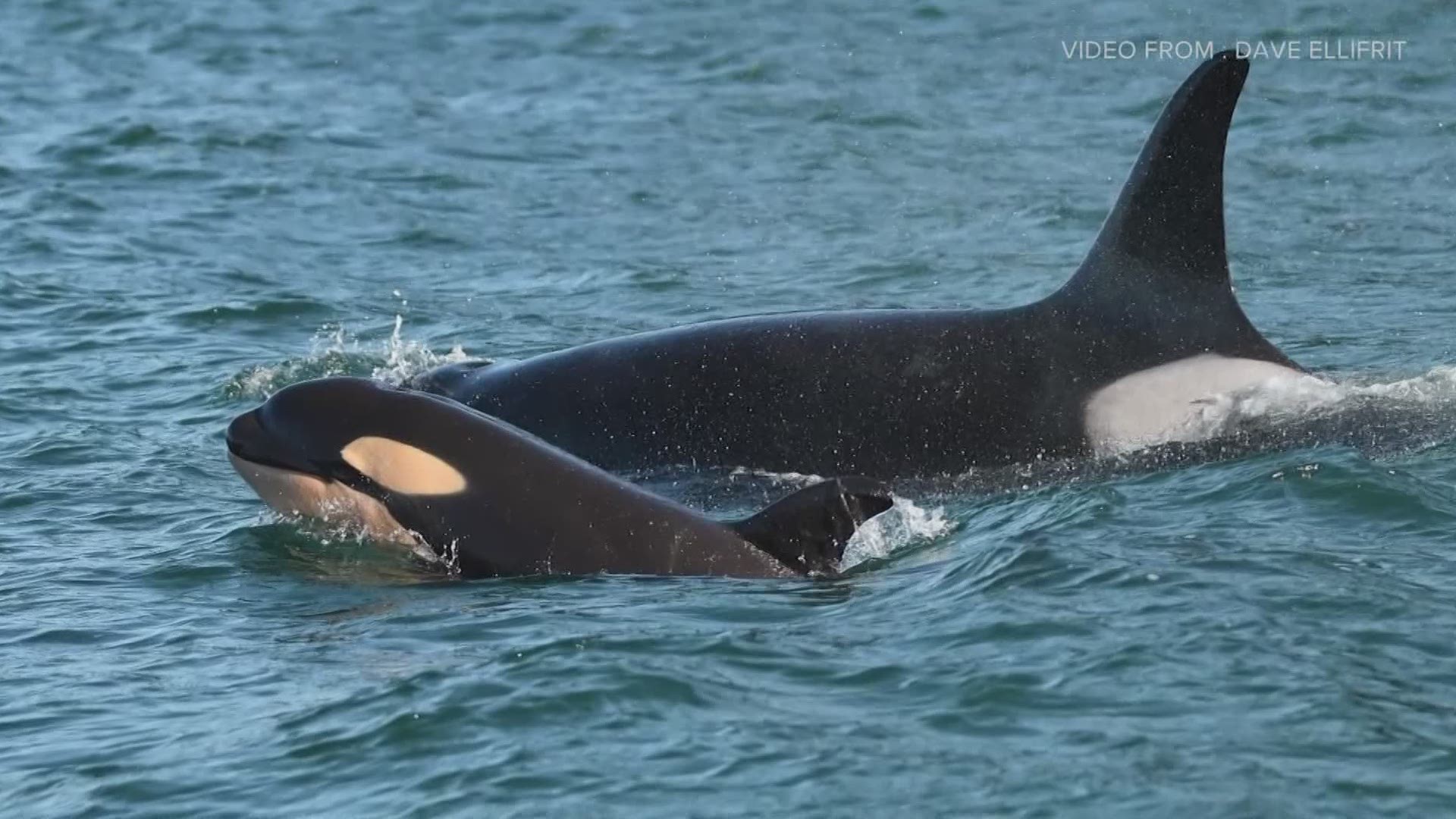 SEATTLE — For more than a decade, Brad Hanson and other researchers have tailed the Pacific Northwest's endangered killer whales in a hard-sided inflatable boat, leaning over the edge with a standard pool skimmer to collect clues to their diet: bits of orca poop floating on the water, or fish scales sparkling just below the surface.

Their work established years ago that the whales depend heavily on depleted runs of Chinook, the largest and fattiest of Pacific salmon species, when they forage in the summer in the inland waters between Washington state and British Columbia.

But a new paper from Hanson and others at the NOAA Fisheries Northwest Fisheries Science Center provides the first real look at what the whales eat the rest of the year, when they cruise the outer Pacific Coast — data that reaffirms the central importance of Chinook to the whales and the importance of recovering Chinook populations to save the beloved mammals.

By analyzing the DNA of orca feces as well as salmon scales and other remains after the whales have devoured the fish, the researchers demonstrated that the while the whales sometimes eat other species, including halibut, lingcod and steelhead, they depend most on Chinook. And they consumed the big salmon from a wide range of sources — from those that spawn in California's Sacramento River all the way to the Taku River in northern British Columbia.

“Having the data in hand that they're taking fish from this huge swath of watershed across western North America was pretty amazing,” Hanson, the study's lead researcher, said Wednesday. “We have to have hard data on what these whales are actually doing.”

There are officially 74 whales in the three groups of endangered orcas, known as the J, K and L pods of the southern resident killer whales. Three calves have been born since September, but those are not yet reflected in the count because only about half of the babies survive their first year.

Facing a dearth of prey, contaminants that accumulate in their blubber, and vessel noise that hinders their hunting, the whales are at their lowest numbers since the 1970s, when hundreds were captured — and more than 50 were kept — for aquarium display. Scientists warn the population is on the brink of extinction.

The paper, published Wednesday in the journal PLOS One, suggests that efforts to make Chinook more abundant off the coast in the non-summer months could especially pay off, and that Columbia River Chinook hatchery stocks are among the most important for the whales. It also suggests that increasing the numbers of non-salmon species could help fill the gaps for the whales when Chinook aren't available in the open ocean.

RELATED: Despite recent births, 'a long way to go' to save Southern Resident orcas

RELATED: Give orcas extra space on the water to protect calf, experts say

NOAA has already used some of the data, which has been available internally as scientists awaited the study's publication, in proposing what areas to designate as critical habitat for the whales. Officials could use it in prioritizing certain habitat restoration efforts or in timing hatchery production of salmon to best benefit the whales, said co-author Lynne Barre of the National Marine Fisheries Service's Protected Resource Division.

The information could also be key in setting limits for fisheries; the Pacific Fisheries Management Council has recommended that NOAA curtail fishing if Chinook abundance is forecast to drop below a certain level.

The researchers encountered the whales 156 times from 2004 to 2017, with most of the fecal and prey samples from the outer coast being collected in 2013 and 2015 — when the whales were easier to find because they were satellite tagged. There were big runs of Chinook those years, which might have been reflected in their findings; since then, Chinook numbers have fallen up and down the coast due to drought in California and warmer ocean conditions.

Credit: AP
This Sept. 2008 photo provided by the Center for Whale Research taken near Washington state's San Juan Islands shows scientists looking for clues about the diet of the Pacific Northwest's endangered orcas using a pool skimmer to collect the scales or other remains of salmon the whales had eaten. (Ken Balcomb/Center for Whale Research via AP)

In the summer, when the whales forage in the inland waters of the Salish Sea, their diet is almost entirely Chinook — mostly those that return to spawn in Canada’s Fraser River, the paper said. By September, as coho salmon return to spawn in the region's rivers, they make up about half of the orcas’ diet, with a mix of Chinook, chum and coho providing sustenance through the fall.

In the winter, when the whales spend more time on the outer coast, they turn to non-salmon species, apparently because Chinook are more spread out and harder to find.

Barre said it may be surprising that the orcas focus so much on Chinook when there are so many other fish in the sea, but research has also suggested that the whales might target them because the nutritional value of the big, fatty fish is worth the calories burned catching them.

“It would certainly make our lives easier if they were eating a lot more of the other things that are available,” she said.

RELATED: VERIFY: Can we and should we feed the orcas?