Cesar Sayoc is an amateur body builder and former male stripper with a history of financial problems and an extensive record of past arrests. Cesar Sayoc is an amateur body builder and former male stripper, a loner with a long arrest record who showed little interest in politics until Donald Trump came along.

On Friday, he was identified by authorities as the Florida man who put pipe bombs in small manila envelopes, affixed six stamps and sent them to some of Trump's most prominent critics.

Records show Sayoc, 56, of Aventura, has a history of financial problems and extensive record of past arrests, including a stint served on probation for making a bomb threat. He was born in New York City and attended college in North Carolina before moving to the Miami suburbs in the late 1980s.

Florida voter records show he first registered in March 2016 as a Republican and cast a ballot in that November's heated presidential election. Sayoc's social media accounts are peppered with memes supporting Trump, denigrating Democrats, and promoting conspiracy theories about George Soros, the billionaire political donor who was the first targeted this week by a package bomb.

Sayoc has also tweeted and posted on Facebook videos that appear to show him at Trump rallies.

Credit: Broward County Sheriff’s Office
The suspect in the mail bomb investigation has been identified as Cesar Sayoc.

At the auto parts store in Plantation, Florida, where Sayoc was taken swarmed by officers and arrested on Friday, authorities towed away a white van covered with stickers supporting Trump and criticizing media outlets that included CNN, the news channel also targeted by a mail bomb this week.

"I know the guy is a lunatic," said Lenny Altieri, Sayoc's cousin, told The Associated Press on Friday. "He has been a loner." He confirmed that Sayoc had been a stripper.

Court records in Florida show that Sayoc was arrested in 2002 and served a year of probation for a felony charge of threatening to throw or place a bomb. Court records available online did not immediately provide further details about the case, but his lawyer in the case told The Associated Press the case involved a heated conversation with a Florida utility representative.

Ronald Lowy, a Miami attorney, said Sayoc became frustrated about a lack of service and told a Florida Power and Light employee "something to the effect that you're not taking care of my problem and I bet you would if I threw a bomb at you." Lowy said Sayoc showed no ability at the time to back up his threat with any bomb-making expertise.

The lawyer went on to describe Sayoc as "a confused man who had trouble controlling his emotions."

Florida records show Sayoc was also convicted in 2014 for grand theft and misdemeanor theft of less than $300, and in 2013 for battery. In 2004, he faced several felony charges for unlawful possession of a synthetic anabolic steroid often used to help build muscles. He also had several arrests for theft in the 1990s and faced a felony charge for obtaining fraudulent refunds and a misdemeanor count of tampering with physical evidence.

Lowy said he recalled that Sayoc also had a run-in with authorities over possession of steroids and another case in Broward County where he was charged with possessing a fake driver's license after altering his birthdate to make him appear younger.

"His mind doesn't seem to operate like most peoples'," Lowy said. "It shows in his anger, his emotion and his behavior." 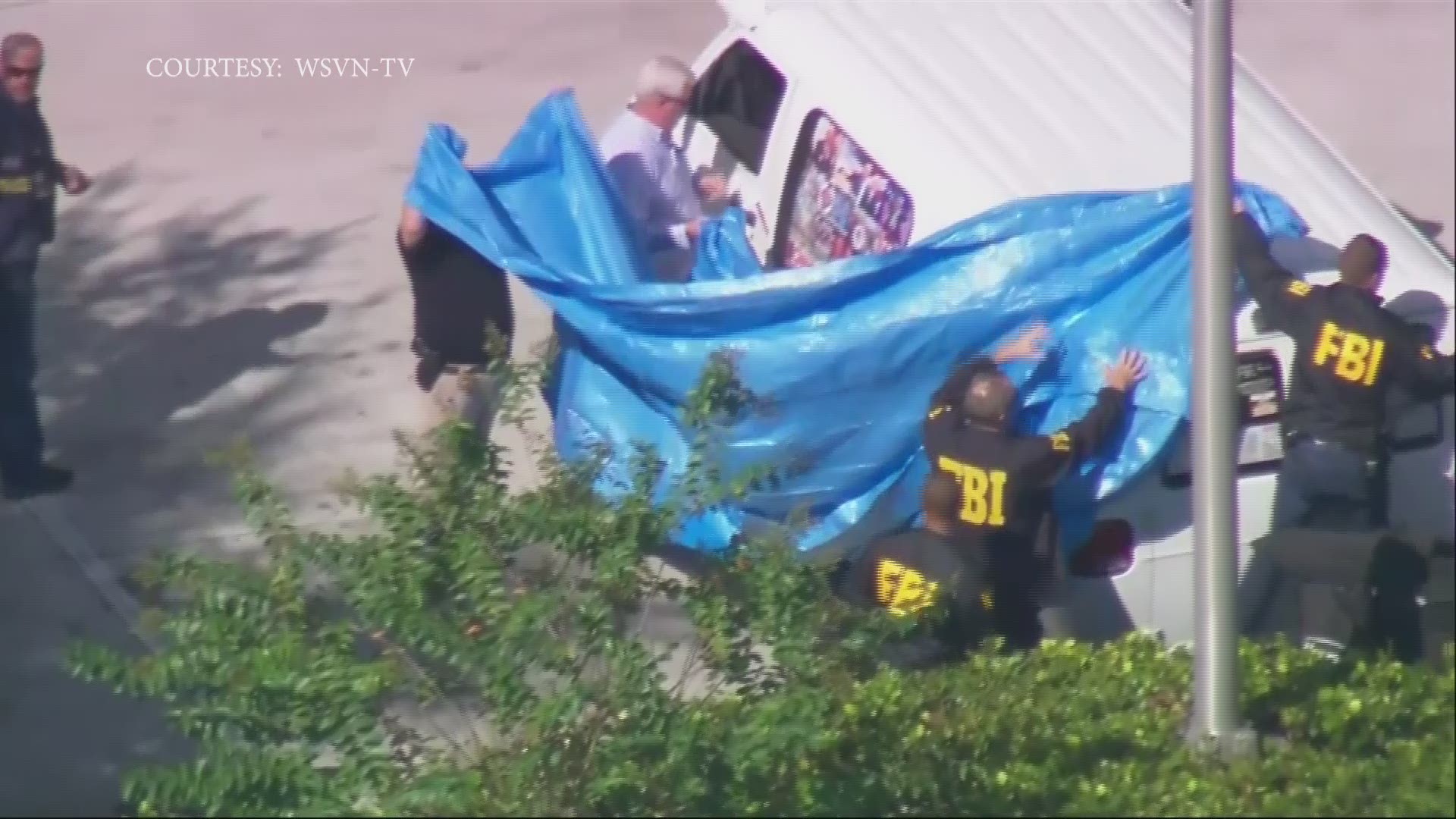 More recently, Sayoc described himself on social media as being affiliated with the Seminole Warriors boxing club.

However, his cousin said Sayoc's mother was Italian and his biological father was Filipino, and his parents separated when he was a young boy. Altieri said the only connection to Native Americans was that Sayoc a decade and a half ago had dated a woman in Minnesota who was a member of a tribe.

"That might be the only connection I can think of," Altieri said.

Gary Bitner, a spokesman for the Seminole Tribe of Florida, said there is no evidence to show that Sayoc worked for the tribe or was a tribal member.

After his parents separated, Sayoc was "kind of rejected" by his family, Altieri said.

"When you get no love as a young kid, you get kind of out of whack," he said.

Sayoc's name is listed on business records tied to dry cleaning and catering businesses. Records also suggest he also had recent financial problems, including losing his home in foreclosure in 2009 and filling for Chapter 7 bankruptcy protection in 2012.

In court records filed as part of the bankruptcy case, Sayoc was described as having $4,175 in personal property and more than $21,000 in debts. His monthly income at the time was $1,070.

"Debtor lives with mother, owns no furniture," Sayoc's lawyer indicated in a property list. He owned a 2001 Chevy Tahoe with 285,000 miles on the odometer. Most of his debt was from unpaid credit cards opened up in South Florida and banks across the U.S.

Court files show Sayoc completed a financial management course and was discharged from his debts in September 2012. Sayoc's mother, Madeline, also filed for bankruptcy at the same time and was discharged in January 2017. She was not immediately available to respond to phone messages left with her by the AP.

Christie Cauble, interim director of communications at Brevard College in North Carolina, said Sayoc enrolled at the school in 1980 and attended through three semesters. At the time, Brevard was a two-year school, and Cauble said Sayoc didn't graduate.

He then transferred to the University of North Carolina at Charlotte, enrolling for the 1983-84 academic year. Buffie Stephens, director of media relations for the school, said Sayoc didn't declare a major. He played a few games as a walk-on player for the university's men's soccer team.

A Twitter account that appears to belong to Sayoc, @hardrock2016, includes memes denouncing Florida gubernatorial candidate Andrew Gillum, including a photo of Soros made to look like he's holding a puppet that resembles Gillum.

Sayoc was swarmed by dozens of heavily armed law enforcement officers on Friday morning in the parking lot of an AutoZone store.

Thomas Fiori, a former federal law enforcement officer who operates a property management office directly across the street from the store, said he heard a small explosion, probably a device police use to distract subjects called a flash bang. Officers carrying semi-automatic rifles and wearing bulletproof vests ordered Sayoc to the ground.

Fiori, who described Sayoc as having short hair on the sides and a ponytail in the back, said the accused mass bomber didn't resist.