With U.S.-Iran tensions making international headlines, these are the top questions people had for Google regarding the Middle East nation. 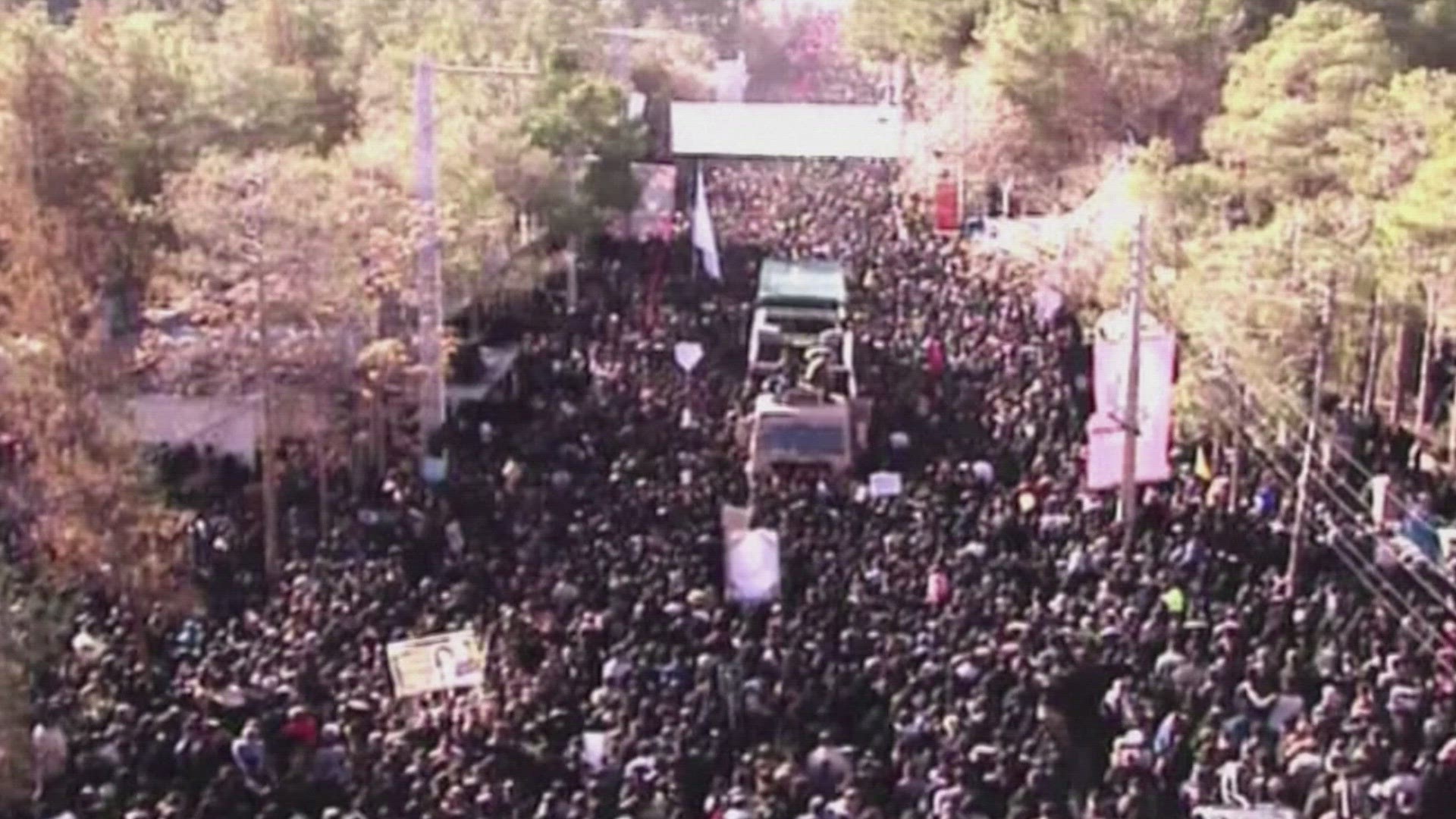 WASHINGTON — Tensions between the U.S. and Iran hit an alarming high point this week after the killing of a top Iranian general in Iraq.

Iran struck back with a missile attack on two bases in Iraq that house U.S. troops. Afterwards, President Donald Trump said Iran appears to be "standing down."

According to Google Trends data, these are the top five questions people have asked over the past week regarding Iran.

What happened in Iran?

To answer what is happening in Iran, let's start in neighboring Iraq.

On Jan. 3 in Baghdad, the U.S. carried out an airstrike which killed Iran's Major General Qassem Soleimani.

Iraq's Popular Mobilization Forces said shortly after "five members and two guests" had been killed, then it was revealed that Gen. Qassem Soleimani was dead. The Iraqi Prime Minister's office released photos of the airstrike's aftermath.

The U.S. Department of Defense confirmed in a statement that President Trump ordered the strike to protect US personnel by killing General Soleimani. The Pentagon said Soleimani was "actively developing plans to attack American diplomats and service members in Iraq and throughout the region."

Iran retaliated less than a week later by firing at least a dozen missiles from inside Iran, targeting two coalition airbases in Iraq that housed U.S. troops.

No American casualties were reported, per Pentagon battle damage assessments, by Wednesday morning.

Trump addressed the nation Wednesday and said it appeared Iran was "standing down" after the attack.

Who are Iran's allies?

After the U.S. airstrike that killed Iran Major General Qassem Soleimani, a Tehran-led alliance rose up in support across the region. These alliances were created in large part because of the work of Gen. Soleimani, as Reuters reports.

Some of Iran's allies in the region include countries like Lebanon, Iraq, as well as large geopolitical players such as China.

In Iraq, Iran has backed Shi'ite groups which have gained strength in recent years, boasting tens of thousands of fighters and acting as a leading force fighting against the Islamic State.

RELATED: President Trump: Iran appears to be 'standing down' after missile attack

RELATED: Iran fires back at US with missile attack at bases in Iraq

In Lebanon, the group Hezbollah was created with the help of the Iranian Revolutionary Guards back in 1982. Hezbollah is considered to be a terrorist organization by the U.S. and the group has considerable political cloud in Lebanon, while also being allied with Iranian interests in the region, in areas like Syria and Iraq.

In Yemen, the Houthi movement is aligned with Iran and is being fought by Saudi Arabia. The group has been battling Saudi Arabia's military alliance for around five years. Houthi rebels claimed responsibility for an attack on a Saudi oil refinery in September which cut Saudi Arabia's oil output by more than half.

China is a powerful player on the world stage and is also considered to be an ally of Iran, yet the Chinese government has chosen to stay fairly neutral as tensions between the U.S. and Iran rise after the killing of top Iranian commander Soleimani. While China's Foreign Minister Wang Yi said China was “highly concerned” about the escalation, he did not use strong words to criticize or condemn the situation. As Bloomberg reports, the comments fall in line with China's continued pattern of avoiding becoming entangled in a part of the world that is volatile and where their strategic interests could be affected negatively.

Does Iran have nuclear weapons?

Tensions between the U.S. and Iran have ratcheted up dramatically at the start of 2020. Iran recently announced that it would be the abandoning the remaining restrictions under the Iran deal, an agreement that was introduced under the Obama administration. But, experts believe Iran doesn't have nuclear weapons and the country abandoning the agreement doesn't necessarily mean Iran's government is rushing towards a worst case scenario. Corey Hinderstein of the Nuclear Threat Initiative, told Buzzfeed News, “is this a sign that Iran is racing toward a bomb? Absolutely not.” Hinderstein said, “We are not seeing behavior that points in that direction.”

Iran is a country in southwestern Asia, considered to be part of the Middle East. The country is bordered by Iraq, Afghanistan, Pakistan, Turkey, Armenia, Azerbaijan and Turkmenistan. Two of the major bodies of water that border the nation of Iran are the Caspian Sea, as well as the Persian Gulf.

As Encyclopedia Britannica points out, the country has long played an important role strategically in the region.

How big is Iran?

Iran's land area is about 636,374 square miles, which makes it the 17th largest country on earth, according to Britannica. Yet, Iran is only about 4% smaller than Alaska. Iran controls about a dozen islands in the Persian Gulf, which is one of the main bodies of water that surrounds the Middle Eastern nation's mainland. Nearly 4,770 miles of the country's boundary is seacoast.