In a wild day on Wall Street, the Dow suddenly spiraled down almost 1,600 points at one moment — in what some analysts said was a computer- and machine-generated drop similar to the Dow's "Flash Crash" back in 2010. 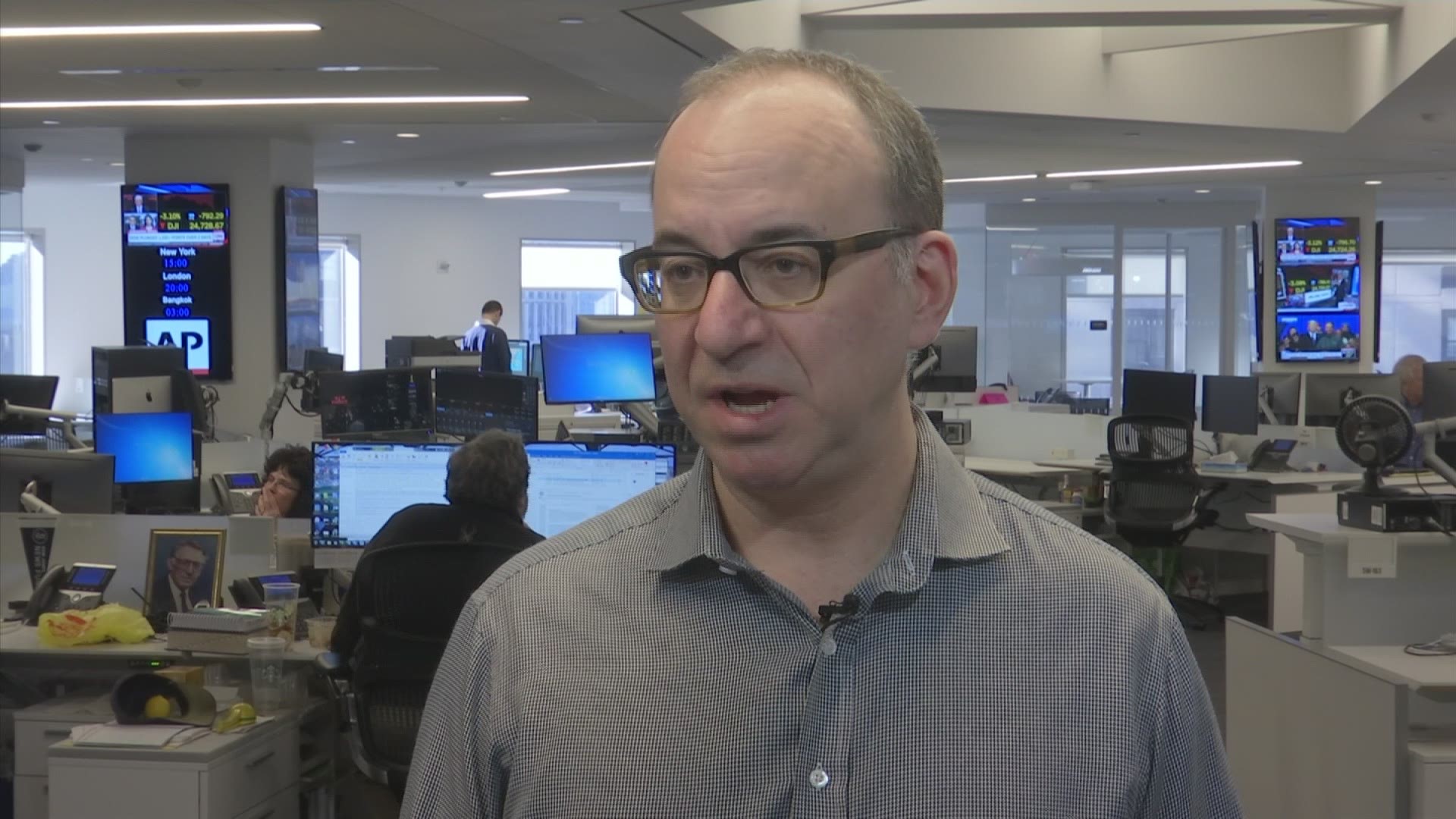 The Dow Jones industrial average suffered its biggest one-day point drop in history, plunging 1,175 points on Monday and giving back all its 2018 gains as a flash-crash-style drop intensified a free fall in stocks that began last week.

Fears of spiking inflation and borrowing costs caused investors to rethink their bullish views on stocks, which until just last week had fueled huge gains in the blue-chip Dow.

While the pounding in point terms was historic — with the loss eclipsing the prior one-day record of 778 points lost during the 2008 financial crisis — the Dow's 4.6% decline on Monday was not sizable enough for Wall Street pros to describe it as a crash. And the decline didn't even make the top 20 biggest percentage drops for the Dow.

"A waterfall crashette," is the way Gary Kaltbaum, president of Kaltbaum Capital Management, described the drop, which left the Dow down 8.5% for the year and ever closer to a long-anticipated "correction," or 10% drop, that many Wall Street pros have been calling for after the Dow's 25% gain last year.

Asked why the Dow, which also cratered 666 points Friday, gyrated so wildly, Axel Merk, chief investment officer at San Francisco-based Merk Investments, said: "When stocks reach new highs month after month, when a virtual currency is the hottest thing in town, greed has overtaken fear. And when that happens, well, it's time to be fearful again. Consider this a wake-up call."

The market had been enjoying a dizzying ascent since President Trump was elected in November 2016, with the Dow gaining 45% through its record closing high on January 26, 2018.

But investors got too exuberant and stock prices ran up too much, too fast, making the market vulnerable. Stocks simply had too many buyers at the start of the year. In fact, more than $100 billion flowed into stocks globally at the beginning of 2018, according to Bank of America Merrill Lynch data.

The Dow's massive drop was the market's way of "unwinding" the excess price gains that had built up, says Tom Essaye, editor and founder of a financial newsletter The Sevens Report.

The selloff has been sparked by inflation fears and worries that interest rates could rise faster than expected. Those fears stem from a strong employment report released Friday that showed wage growth for hourly workers over the past year had risen nearly 3%, its quickest pace since 2009.

Monday's selloff has pushed the Dow down more than 5% from a high for the first time since the Brexit vote in June 2016 — or 19 months ago, a record. In contrast, since 1928, the market has suffered an average of 3.4 annual drops of 5% or more, according to Bespoke Investment Group.

The long period since the last scary market event makes the current drop, which market pros had been warning about, seem worse than it is.

"No matter how well telegraphed or forecasted a pullback may be, it's still never fun," Chris Verrone, a stock strategist at New York-based Strategas Research Partners, told clients in a report.

Wall Street pros noted that business conditions were still supportive of stocks, noting that the economy is strong, the job market robust and corporate earnings growth on the rise following a big tax cut for businesses.

And President Trump, who had been touting the market's record highs, on Monday evening also stressed the economy's soundness, through his press secretary, Sarah Sanders: “The President’s focus is on our long-term economic fundamentals, which remain exceptionally strong, with strengthening U.S. economic growth, historically low unemployment, and increasing wages for American workers."

One firm pointed out that the market has actually performed well when interest rates are rising. While another said the combination of falling stock prices and rising earnings has made the pricey market less expensive.

Investors were once again advised to keep the selloff in perspective. A 401(k) investor who had $100,000 in the Dow at the market peak in late January, still has $91,500 in his or her account even after the recent decline.

"Corrections are a normal part of the investing process and not a reason to sell quality investments," said Alan Skrainka, chief investment officer at Cornerstone Wealth Management in Des Peres, Missouri.

"My best advice for investors with long-term goals like saving for retirement is to turn off the TV and go walk the dog."