Swedish 16-year-old activist Greta Thunberg started the climate strike movement, and more teens are stepping up to join her. 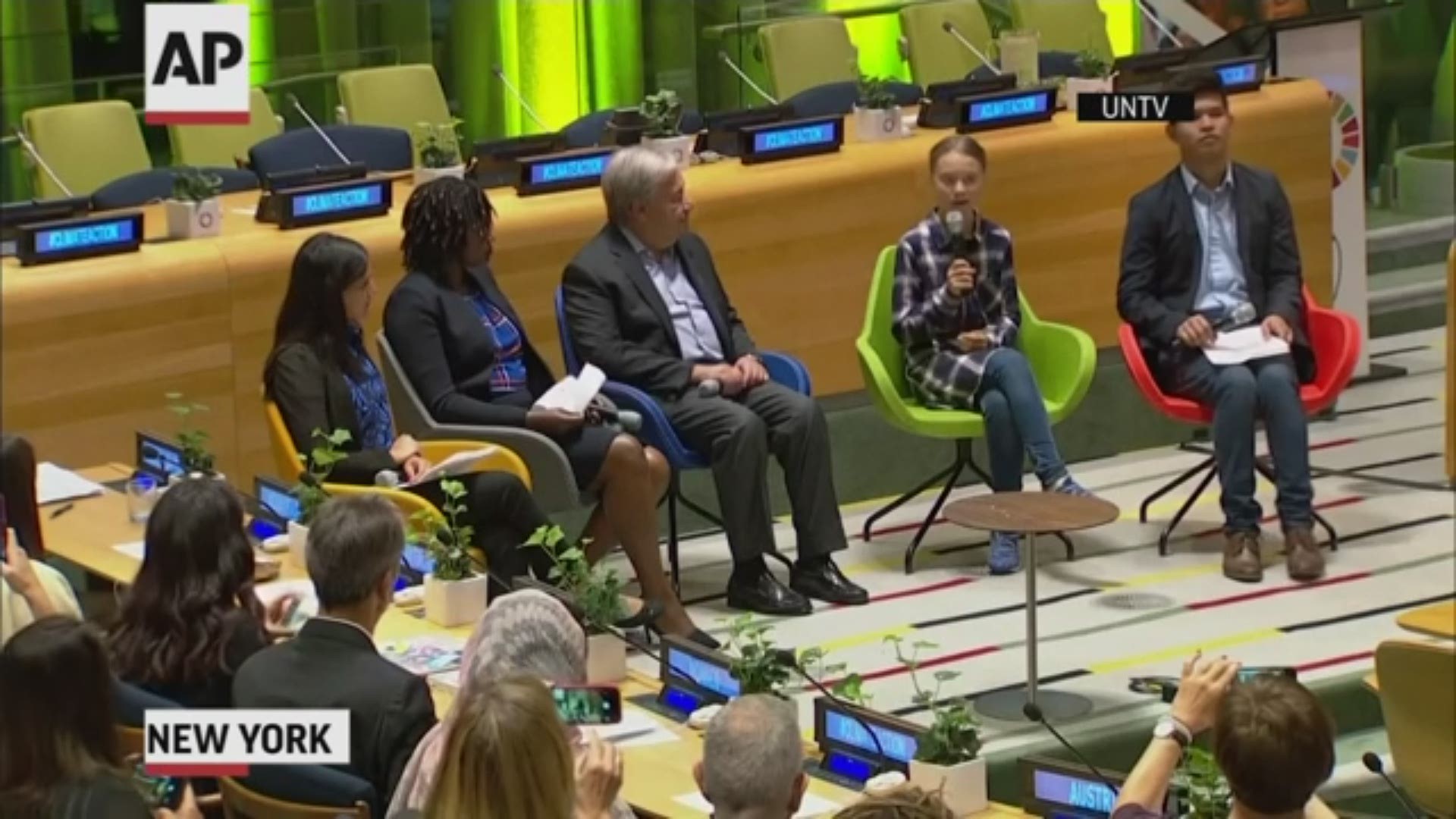 UNITED NATIONS — Fresh off the climate strike that took hundreds of thousands of young people out of classrooms and into the streets globally, youth leaders gathered at the United Nations Saturday to demand radical moves to fight climate change.

"We showed that we are united and that we, young people, are unstoppable," Swedish 16-year-old activist Greta Thunberg, who started the climate strike movement with her lone protest in front of her country's parliament about a year and a half ago.

RELATED: Hundreds sign pledge to not have children during climate crisis

Friday's strike across six continents and Saturday's youth conference presage a full-on climate conference next week at the U.N. General Assembly, which has placed the issue of climate change at front and center as world leaders gather for the annual meeting.

Activists at Saturday's gathering demanded money for a fund to help poorer nations adapt to a warming world and provide greener energy. They also insisted that the world should wean itself quickly from coal, oil and gas that cause climate change.

Jayathma Wickramanayake, the U.N. Secretary-General's youth envoy, called climate change "the defining issue of our time. Millions of young people all over the world are already being affected by it."

Fiji climate activist Komal Karishma Kumar said global warming is not just taking a toll on the planet but on her generation, especially people from vulnerable places like her Pacific island nation.

"Young people from different parts of the world are living in constant fear and climate anxiety, fearing the future, the uncertainty of a healthy life or a life for their children at all," Kumar said.

She added: "I do not want our future generations to submerge with our sinking islands."

After listening to Thunberg and other youth climate activists, a tie-less Secretary-General Antonio Guterres credited young people with transforming him from a pessimist to an optimist in the fight against global warming.

Guterres said he sees "a change in momentum" going into Monday's Climate Action Summit taking place ahead of the U.N. General Assembly gathering of world leaders that starts Tuesday, telling the youths "you have started this movement."

"I encourage you to keep your initiative. Keep your mobilization and more and more to hold my generation accountable," Guterres said. "My generation has largely failed until now to preserve both justice in the world and to preserve the planet."

Kumar told Guterres that "we will hold you accountable and if you do not, remember we will mobilize to vote you out."

The youth activists brainstormed about what they could do to change the trajectory of an ever-warming planet and how they can help the world adapt to climate's changes. There was talk of hashtags, entrepreneurial ideas and climate art and poetry.

"Be that hummingbird that puts out the forest fire by fetching water with its small beak as all the other animals, including the elephant, told her it was impossible," said Kenyan activist Wanjuhi Njroge.