Chadwick Boseman remembered by kids with mock funerals and '42' jerseys

Using their action figures, young fans of “Black Panther” paid their respects to star Chadwick Boseman by staging mock funerals in their bedrooms and driveways. 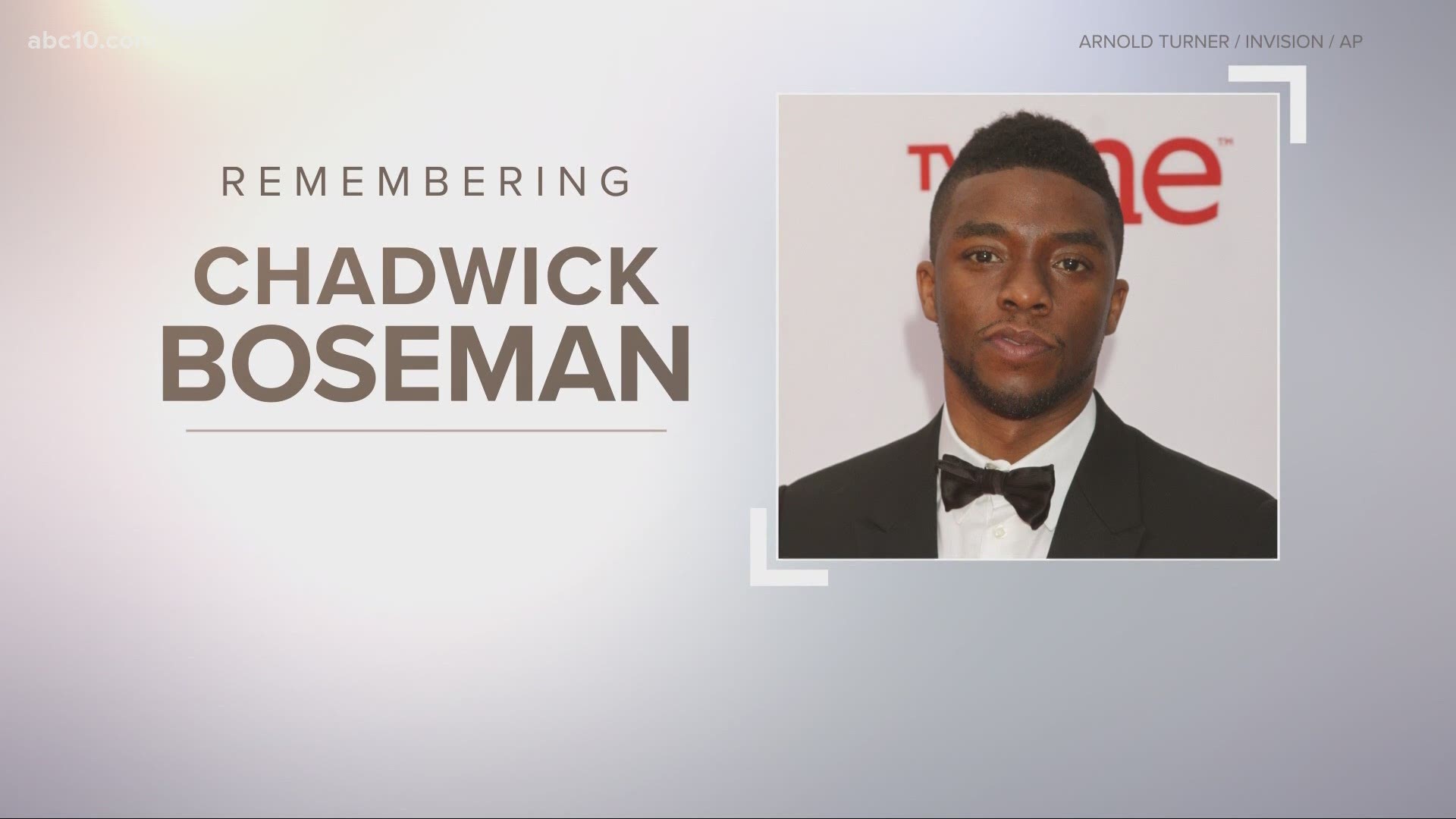 NEW YORK — In their driveways or in their bedrooms, using little cardboard boxes or piles of backyard dirt, young fans of “Black Panther” star Chadwick Boseman paid their respects with lots of Wakanda salutes and mock funerals attended by action figures.

Soon after the shocking news of Boseman's death Friday at age 43, parents, grandparents, aunts and uncles began posting photos of funerals staged by kids for King T'Challa, the actor's lead character from the Marvel blockbuster. Some of those posts have been shared thousands of times amid an outpouring of grief from admirers of all ages who were unaware he had been battling colon cancer for four years.

Other young fans mourned in more private ways, watching “Black Panther" and “42” for the umpteenth time with their families in Boseman's honor.

To many kids, his passing was a life event, driven by the change-makers he portrayed but also by his heartfelt comments in awards speeches and interviews about the need for more opportunities for people of color.

Boseman's King T’Challa, ruler of the fictional African nation of Wakanda, was introduced in 2016′s “Captain America: Civil War.” His “Wakanda Forever” salute reverberated around the world after the release of “Black Panther” two years ago. The actor's turn as baseball great Jackie Robinson in “42” came out in 2013 and is now being discovered by younger fans.

Nick Cummings, 11, of Louisville, Kentucky, loves both films. He stumbled on word of Boseman's death on TikTok, before his mother had broken the news.

“At first when I heard it I didn't believe it,” he said Monday. “I felt like a part of me got erased.”

A little too old for action figure funerals, Nick, who is Black, donned his baseball jersey emblazoned with Robinson's “42” and had no plans to take it off any time soon.

Credit: AP
This combination photo shows, from left, Gavyn Batiste, 7, dressed as Black Panther and surrounded by action figures in Lafayette, La. on Aug. 31, 2020, actor Chadwick Boseman in character as T'Challa in "Black Panther" and 10-year old twins Lenny, left, and Bobby Homes paying tribute to Boseman at their home in in Mesa, Ariz.

Twins Lenny and Bobby Homes in Mesa, Arizona, are 10. Their mom, Annalie, had no intention of telling the boys, who are Filipino American, about Boseman's death, but they found out on their own Sunday on YouTube. They went the funeral route, using a black car seat for their prone Black Panther.

Dad David Homes is a big Marvel enthusiast. He began schooling his sons in both the comics and films when they were little. How many times have they seen “Black Panther"?

“A lot!” the two chimed in unison.

Of Boseman's death, Lenny said: “We were really sad. He was one of our favorite actors. When we heard, we were like, the Panther needs a funeral. He was a good king. He was very nice and kind, and he followed the rules.”

Annalie said she wanted to shield the boys from the news because they lost a grandfather less than a month ago.

The twins have more than 100 action figures and their own YouTube channel. They gathered up 13 of their favorite characters for the funeral Sunday, including Thor, Black Widow, Rocket Raccoon, Hulk and Spider-Man. The toys' arms can't bend into the Wakanda salute, so the boys arranged them with arms extended, reaching out to T'Challa.

RELATED: "42" returns to movie theaters in tribute to Chadwick Boseman

RELATED: 'I wish we had more time': Michael B. Jordan breaks silence on Chadwick Boseman's passing

Djoser Burruss, 12, of San Diego took the news hard. One of his grandmothers died of the same type of cancer. Djoser, who is African American, posted a tribute to Boseman on Instagram: “R.I.P. Chadwick Boseman, the one and only Black Panther. We mourn your passing but you will forever live in our hearts. Thank you for showing us what KINGs do.”

In an interview Tuesday, Djoser added: “I saw it on my phone and I was devastated. We kind of owe it to ourselves to be better every day because not every day is guaranteed, just like Chadwick, but he did so much in those four years."

His mother, Christina, said the family rewatched “Black Panther” last weekend, along with videos of Boseman speaking out on behalf of Black people to “soak up all of his energy and his wisdom.”

Gavyn Batiste, 7, in Lafayette, Louisiana, has seen “Black Panther” a half dozen times. He invited Captain America, Thor and Hulk, among other Avengers, to the funeral he held. He also wrote a song for T'Challa that goes like this:

“Black Panther is gone. I don't know what to say. I never thought this would happen in my day. This is sad. I am mad. I don't know how to feel. It still feels unreal. Wakanda Forever!”

Sonya Antoine, Gavyn's mom, said the film offers Black children a “sense of hope, a sense of dreaming, and to just embrace who you are in your culture and what that culture can mean to you and your family."

Nick's mother, Deedee Cummings, writes children's books with diverse characters and knows how rare it is to find afrocentric fare for children like the futuristic world in “Black Panther.” She recalled how happy her son was to see the film in a theater with a neighbor when it first came out. Both wore Wakanda gear.

The family watched the movie again on TV after Boseman's death. Nick sat solemnly this time around.

“He never sits still,” Deedee said. “This time he did.”

“It's so important to acknowledge this loss to children, especially Black children,” she said.

Susan Nicholas in Atlanta also writes for children. Her book, “The Death of Cupcake,” is out in November and focuses on grief among kids. Boseman's death, she said, may be difficult for parents to discuss because they're reluctant to burst the larger-than-life bubble created in movies.

“But kids actually have insights that are quite profound,” she said. “We can all elevate our perspectives around death to really heal from that. At the end of the day, those are human beings in those costumes and they succumb to death, too, even if Hollywood doesn't allow them to die.”

Chadwick Boseman through the years

1 / 19
Jordan Strauss/Invision/AP
FILE - In this Sunday, Nov. 24, 2019 file photo, Chadwick Boseman poses in the press room at the American Music Awards at the Microsoft Theater in Los Angeles. Actor Chadwick Boseman, who played Black icons Jackie Robinson and James Brown before finding fame as the regal Black Panther in the Marvel cinematic universe, has died of cancer. His representative says Boseman died Friday, Aug. 28, 2020 in Los Angeles after a four-year battle with colon cancer. He was 43. (Photo by Jordan Strauss/Invision/AP, File)