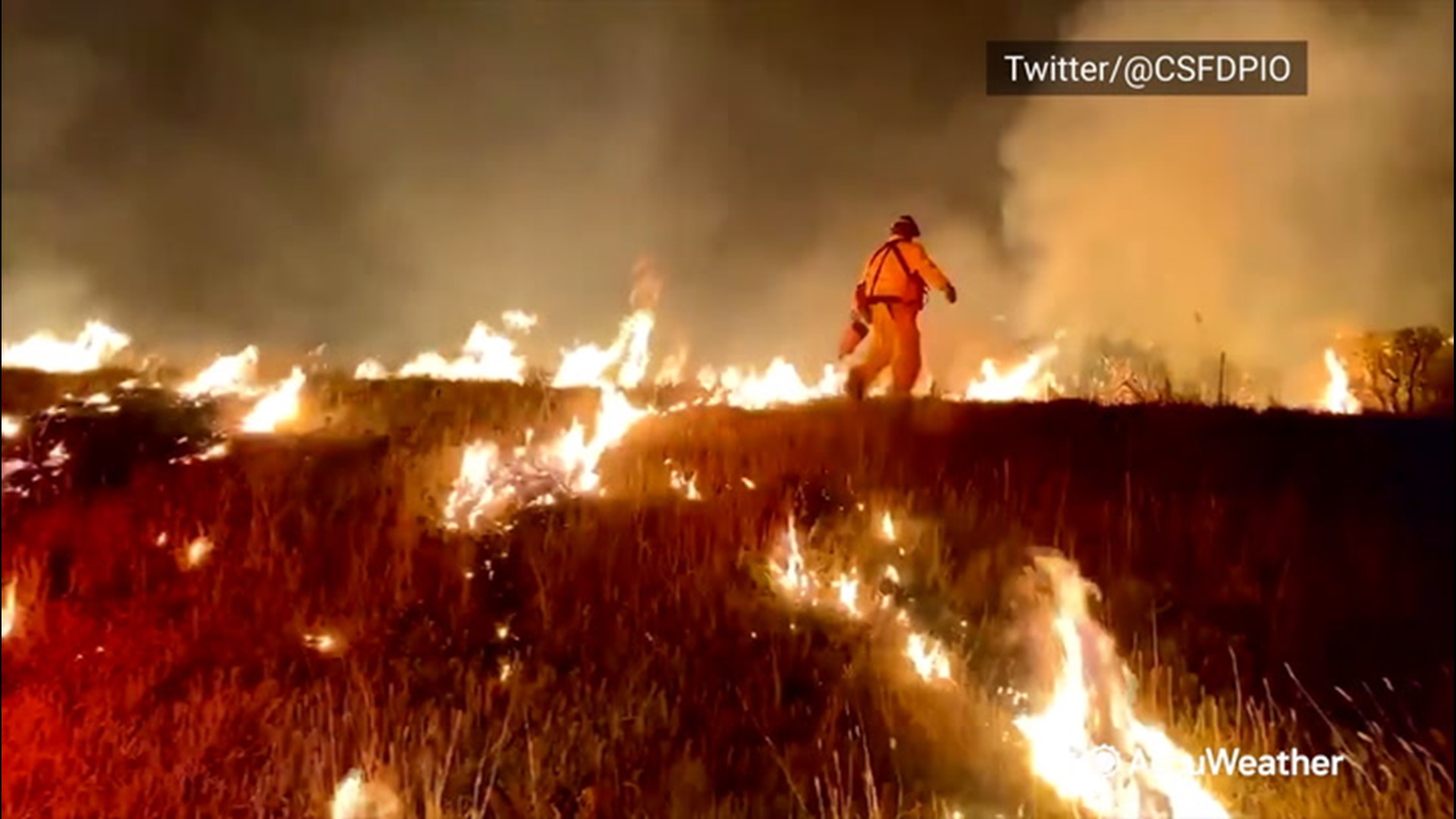 The National Weather Service issued a red-flag warning from 5 a.m. through Friday morning. With bone-dry humidity and wind gusts possibly hitting 55 mph, Pacific Gas & Electric warned that it may begin cutting power Wednesday evening to as many as 54,000 customers in 24 counties.

The nation's largest utility was expected to make a decision earlier Wednesday on whether to implement the preemptive electricity cuts in an effort to prevent fires from being started by damaged power lines fouled or knocked down in high winds.

“We really view it as a last resort option,” said Mark Quinlan, the company’s incident commander.

The utility also has deployed generators and other measures to keep electricity flowing in some areas that might otherwise have lost power during the outages, Quinlan said.

About 33,000 homes and businesses could begin losing power at 6 p.m., mainly in the Sierra Nevada foothills and northern San Francisco Bay Area, followed by 21,000 other customers two hours later in other portions of the Sierras and the Bay Area, along with portions of the Central Coast, PG&E said.

The figures for affected customers range from more than 11,300 in Butte County, 6,000 in Santa Cruz County and around 5,400 customers in Alameda County to just 10 in Yolo County, according to the utility.

About 200 people in Humboldt County in the far north could lose power Thursday afternoon as winds hit there, PG&E said.

All power should be restored by late Friday night, the utility said.

The outages would include regions already hit by massive wildfires. The Glass Fire that ravaged the wine country of Napa and Sonoma counties was nearly surrounded after destroying more than 1,500 homes and other buildings.

Farther north, the Zogg Fire in Shasta and Tehama counties was 99% contained. Four people died in that blaze. PG&E estimated its cuts potentially could affect nearly 4,700 customers in Shasta and around 1,200 in Tehama.

More than 8,500 wildfires have burned well over 6,406 square miles (16,591.4 square kilometers) in California since the start of the year, but mostly since mid-August. Thirty-one people have died, and more than 9,200 structures have been destroyed.

Most of the huge fires have been fully or substantially contained over the past eight weeks. But 11,500 firefighters remain on the lines.

Numerous studies have linked bigger wildfires in America to climate change from the burning of coal, oil and gas. Scientists say climate change has made California much drier, meaning trees and other plants are more flammable.

PG&E said last month that it is executing smarter and shorter power shutoffs after receiving widespread criticism last year when it turned off electricity to 2 million people to prevent its equipment from sparking wildfires.

PG&E’s aging equipment has previously sparked some of the state’s largest wildfires, including the deadly 2018 fire that destroyed much of the town of Paradise and killed 85. The utility pleaded guilty in June to 84 felony counts of involuntary manslaughter; one death was ruled a suicide. The utility paid $25.5 billion in settlements to cover the losses from power line-sparked catastrophes.

Meanwhile, wildfires will remain a threat in California indefinitely.

“We have had a historic fire season this year,” PG&E meteorologist Scott Strenfel said. “We are and will continue to be in the peak of fire season until the rain and snow returns. And all of us here hope that it returns sooner rather than later.”

Destruction left behind by Glass Fire in Napa, Sonoma counties